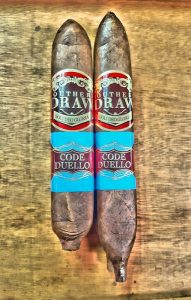 Southern Draw Cigars announces the release of CODE DUELLO, a series of perfectos with annual limited production of 4,000 cigars per blend and vitola that are being produced at Tabacalera Fernandez, Esteli, Nicaragua.

There are so many long-running conflicts and irreconcilable differences throughout the world that are deep rooted in different cultures, different religions, different views, family drama and hidden agendas.  There is great uncertainty in our own industry and the sheer complexities of these many problems demand a modern form of resolution that is not damaging and destructive, does not result in loss of opportunity and massive economic costs.  Southern Draw Cigars believes that even though there may not be amenable final, near-term resolutions, things are not hopeless.

CODE DUELLO – what is it? 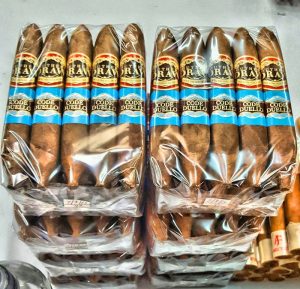 By definition it is a set of rules for one–on–one combat or, a duel!  Rules designed to prevent vendettas between families and social factions, from the Roman Empire to the Renaissance to the American Old West, the code has been changed to suit the times.  Southern Draw Cigars offers a playful modern version of the duel, relaxing and nonviolent means of conflict resolution with a few proposed rules:

The CODE DUELLO series offers a little Southern Sophistication as our most refined cigars to date, have been released to select retail partners and will be shipped to industry media partners in the coming days.

Annual production will be limited to 4,000 cigars per blend and vitola and will come in a pair and the MSRP is $21.99 per pair, although prices may vary based on local and state tax rates.

For general information about the CODE DUELLO Limitada 2016 contact robert@southerndrawcigars.com For general information about Southern Draw Cigars, list of valued retail partners or to become a retail partner, and to enjoy our reviews, please visit us at www.southerndrawcigars.com.  Please LIKE us, FOLLOW us & TWEET us – Facebook/Southern Draw, Instagram/SDCIGARS and Twitter/@SDCIGARS.  Soli Deo gloria!