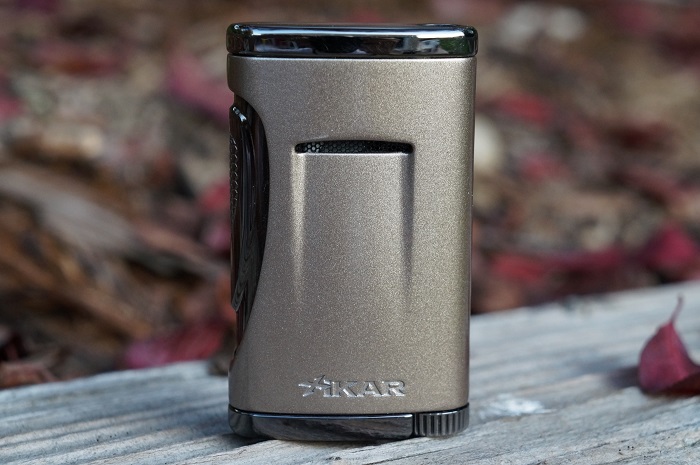 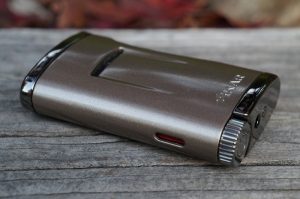 Designed in a class of its own, the new Xidris single flame lighter pushes the limits of luxury styling and high-performance output. Each lighter features a unique, supercar-inspired finish for a distinct and profound style, enhanced through flawless lines and subtle curves. Direct Inject™ Flame Technology optimizes performance, promoting a consistent and steady flame, time after time. Blending Luxury & Performance. 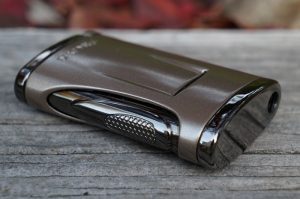 When it comes to torch lighters, I prefer a single flame due to my ability to control the flame much better, so when Xikar announced the Xidris, I was very interested to try it. The color my lighter came in was Sandstone Tan. I really dig this color combination as it is a metallic tan with chrome for the top, bottom and igniter. This combo reminds me of cars of the 50’s and 60’s that used this color and were outfitted with lots of chrome. 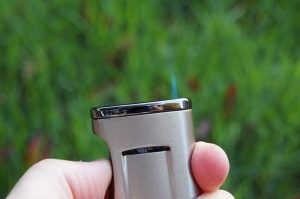 The burner for the lighter is covered until you press the igniter in which then opens and the flame begins. This is a nice feature as it keeps debris from getting into the burner when not in use, such as when it’s in your pocket and is susceptible to pocket lint and other things. The flame adjuster on the bottom has a nice large wheel, so it doesn’t require a tool to make adjustments. It also has a very good resistance to it, so that you have to be deliberate about the adjustment and it won’t easily move if you bump it or if it moves around in your pocket. The igniter also has a firm feel to it in which you need to put enough pressure to get it to light, which is definitely what you want so that it doesn’t magically go off if lightly pressed against something in your pocket for example. The igniter button runs a good length down the side of the lighter, but you need to press closer to the top to get it to fire. There is also a safety feature implemented on the igniter and I found this out by use before I knew it existed. In my normal use of the lighter, I went to grab it to re-light a cigar and I was focusing on something else while I was doing this. In trying to fire the lighter, it felt like the igniter wasn’t going all the way down. When I went to look at the lighter I saw that I was holding it upside down and that having it in that orientation didn’t allow the igniter to depress enough to fire the lighter. This was a great thing as I would have torched my arm had it fired. The safety doesn’t allow the igniter to fire while the lighter is at more than a 45 degree angle. Once you’ve lit it though, you are free to tilt it as much as you want. 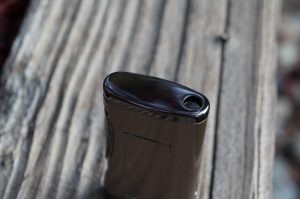 The single flame on this lighter puts out a lot of heat. Even when you see the height of the flame, you still need to keep the foot of the cigar a good distance away as the heat is really projecting beyond the edge of the flame. During my use and for my preference of how I like to light a cigar, I adjusted the flame to be very low as it gave me the type of precise heat/flame that I like to use during my toasting and lighting. While using this lighter, one of the drawbacks that I found is that the body of the lighter really retains temperature for a long amount of time. When using the lighter with a higher flame, or running it for a while to light a large ring gauge cigar for example, the side of the lighter opposite the igniter button where the burner is closer to becomes hot, and at times very hot. There were times where I had to move my index finger lower on the body as it was becoming uncomfortably hot. Even after having set the lighter down for a couple of minutes and then holding it again, it was still noticeably warm. This also works the other way in which when refilling the lighter, the butane is very cold when it transfers, which is normal. The lighter really retains the cold for a while, just like it retained the heat, so you may need to keep the lighter in between your hands for a few minutes after refilling to cut down on the time needed to wait on re-lighting. 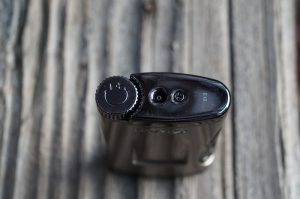 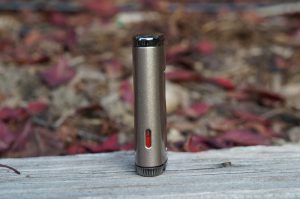 – Body retains heat and cold for long periods of time

This Xikar Xidris lighter works really well. It fits well in the hand and has a good weight. Fuel usage was very good and the addition of a fuel window makes it easy to know when you’re close to needing a refill. I had no issues with first attempt starts either. The chance encounter I had with the igniter button safety was a welcome feature. If Xikar could find a way to resolve the heat build-up/heat retention of the lighters body, then I’m not really sure I could find any negatives with it.