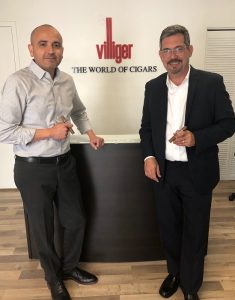 (Miami, Florida) July, 3, 2018— Villiger Cigars continues its growth in the North American market as they announce today that Hector J. Pires was promoted to the position of National Sales Manager for Villiger Cigars North America. Hector Pires is being promoted from the position of South Eastern Territory Manager, (now being managed by Villiger new hire Roger Peña). Pires begins his new role immediately.

Hector Pires, born in Caracas, Venezuela received his education in his native country, earning a degree in International Trade. He later found his niche in hospitality as he joined his family’s restaurant group in Caracas. After rising through the ranks, he moved to Miami to open a high-end restaurant serving International cuisine. After successfully running his restaurant for 10 years, Hector decided to sell and move on to follow his passion for tobacco. A handmade premium cigar smoker enthusiast since his early 20’s, Hector has been able to combine his love of tobacco and background in hospitality management, to provide the best service possible to customers.

Rene Castañeda, Villiger North America President said,” Hector has been a great asset to Villiger Cigars over the past year and a half, and has proven that he can be an effective leader for our sales staff. I look forward to working closely with him as we continue to spread the Villager message to our retailers and consumers.”