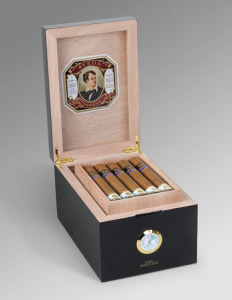 United Cigar, exclusive U.S. Distributor of Nelson Alfonso’s Selected Tobacco Brands, announced today that a new Byron size will be available at the 2016 IPCPR trade show in Las Vegas on July 25, 2016. The new size is part of the Byron Serie Siglo XXI (21st Century). Other Series include Siglo XIX and XX. The Byron Elegantes will measure 55 x 6.125”and will be sold in humidified cabinets of 25. Only 200 boxes will be available for sale in the U.S. for 2016. The 5,000 cigars use wrapper from Ecuador and a Dominican Republic binder and all Ligero, Seco and Volado filler leaves, which origins have not been disclosed.

The Byron Siglo XXI Elegantes uses tobacco aged at least 4 years before rolling and then another 5 full years after rolling, aged in very special cedar cabinets. Suggested retail price of the cigars will be $33 each and humidor boxes of 25 for $825.