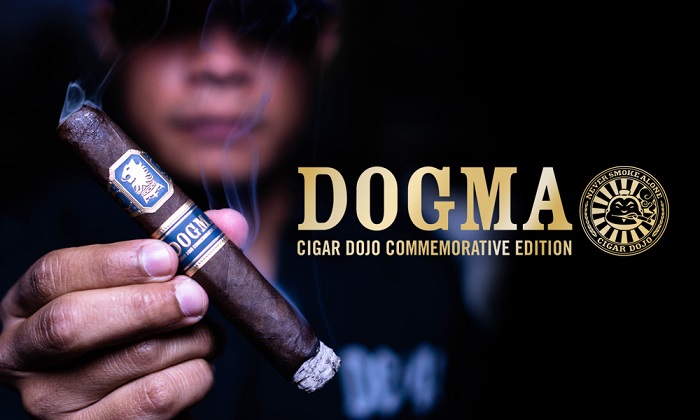 The Undercrown Dojo Dogma features a tweaked blend of the original Undercrown Maduro Corona ¡Viva!, comprised of a Mexican San Andres wrapper, Connecticut Stalk Cut Habano Binder, and Nicaraguan and Brazilian Mata Fina fillers. The “Dogma” was originally created to celebrate the one year anniversary of the Cigar Dojo community in 2014. Unique from the vitolas of the core line of Undercrown, the 6×56 Dogma vitola is box pressed and packaged in a commemorative soft pack with an MSRP of $107.97 for 10 cigars.

From the Wynwood Safehouse, Jonathan Drew President & Founder of Drew Estate, “We are amped for the Undercrown Dojo Dogma to hit our Drew Diplomat Retailers’ shelves.Dogma is truly a special cigar with deep meaning here at Drew Estate. Rocky Mountain Cigar Festival is going to be a huge party with the Cigar Dojo team, kicking off the Nationwide launch. We hope to see everyone there!”

From Lakewood, Colorado, Eric Guttormson, “The DOGMA was our first and still most sought-after release we have ever created. The blend, vitola, and presentation ended up being the perfect storm. It’s one of these rare cigars that tastes amazing right off the truck, yet ages better than any cigar you will get your hands on. Having the chance to release it again is a dream come true for the Dojo team.”