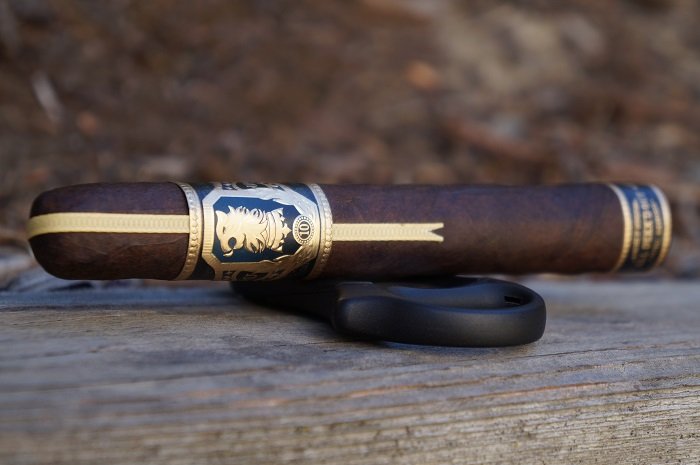 Aaron: The wrapper on the Drew Estate Undercrown 10 Toro is a uniform dark brown and has a couple of raised veins present. The seams are smooth and hard to detect while the caps are applied well. There are three bands, with the primary, traditional Undercrown band sitting on a taller band that has the same color combination. The foot band also carries the same color combination and denotes the anniversary. There is also a ribbon that runs from the back of the primary band, up over the head and under the primary band in front to about an inch and a half further down. The aroma from the wrapper is rich earth, dark chocolate and mild spice. The foot brings very sweet fig and some wood. The pre-light draw brings a mix of wood and stewed fruit along with a mild spiciness on my lips.
Seth: Near oscuro in coloring, the Drew Estate Undercrown 10 Toro has the appearance of a dark chocolate bar. The wrapper has medium sized veins, tooth, glittery sparkles and is coarse throughout. Firm as well, the cigar delivers aromas of rich earth, marshmallows, hot chocolate and tobacco.
John: The Drew Estate Undercrown 10 Toro certainly pulls out quite a lot of stops for packaging. It is presented in cellophane, there is no UPC sticker. The cigar has a main band, secondary band, foot band and a gold ribbon over the cap. I think the only thing that would have taken it to the much vaunted amazing pre-light experience was some sort of artisanal complication like a fancy cap, closed foot or box pressed shape. For aromas, there was a distinct medium strength barnyard, sweet tobacco and aged wood. From the foot, sweet raisin up front, hay and then tobacco underneath.
Jiunn: The Drew Estate Undercrown 10 Toro has an even maduro wrapper shade. Veins are roughly pressed, seams tight, bunch and roll even and head well wrapped. I’m typically not the type to show much excitement on a pre-light experience, but the strip of thick string is very nice and original. Aromas from the wrapper gives campfire, herbal tea and cedar. Aromas from the foot tell rich cedar, plums and white pepper. Cold draw gives dry soil and herbal tea. 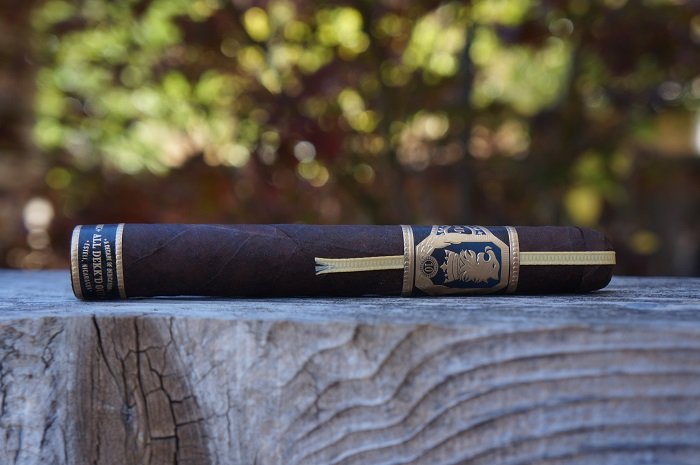 Aaron: The cigar begins with toasted wood, earth and mild cinnamon. At a half inch in, the mild cinnamon transitions to mild black pepper and the earth becomes a bit dry and is even with the toasted wood. At an inch in, some light cocoa powder has joined in. The retrohale is toasted wood and earth with mild black pepper. At an inch and a half, the dry earth has a slight lead over the toasted wood, with the black pepper and cocoa powder light in the background. As the third wraps up, the cocoa powder has departed. The strength in this third was slightly above medium.
Seth: The first third starts out with a lot of rich earth and coffee bean notes. There are some mocha and hot chocolate qualities, and there is a finish of red pepper, leather and tobacco. Full, with a long finish, the cigar smokes at a level around medium-full in strength and body. Very earth.
John: Creamy wood opens the first third, with a lingering dry wood on the post draw. Baking spices and earth come through on the retrohale. That earth starts to settle on the palate between each draw, bringing with it baking spice accents. By the 15 minute mark, some fruit sweetness develops. Chocolate and coffee break through into the retrohale by the 20 minute mark.
Jiunn: The first thing I notice about the first third is not necessarily the flavors, but the mouth feel. The viscosity of the cigar is off the charts, being full bodied. In regards to flavors, an abundance of chalky cocoa forms, which is especially thick on the finish. There’s also leather, minerals and gritty dirt earthiness. Retrohaling gives an appropriate increase in white pepper spice as well as a nutty character. Strength is medium-full. 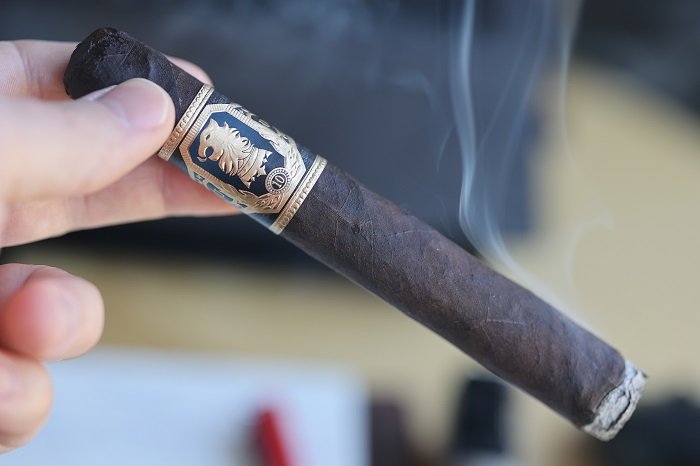 Aaron: The second third continues on with the dry earth slightly ahead of the toasted wood with black pepper light in the background. The retrohale is dry earth and toasted wood. The third wraps up maintaining the same profile of dry earth up front, toasted wood with light black pepper in the background. The strength in this third remained at slightly above medium.
Seth: The second third delivers a creamier flavor profile that is paired with red pepper and chocolate notes. There are some earth and tobacco notes present as well, and the finish has this overall mocha quality. Like before, medium-full in strength and body.
John: Dry wood and mild leather move the cigar into the second third. Light plus strength baking spices with fruit on the retrohale, as dry wood takes up the post draw. Creamy fruit sweetness defines the retrohale as the second third progresses. Some raisin-like sweetness and hay accents settle into the middle of the profile as the second third progresses. Some mild bitterness accents the end of the draw in the bottom half. Earthiness pushes into the middle of the profile nearing the end of the second third.
Jiunn: The second third becomes heavy handed earthy and mineral forward. An overwhelming amount of gritty dirt earthiness and leather. That chalky cocoa I liked so much from the first third is entirely gone. Strength and body remains medium plus and full, respectively. 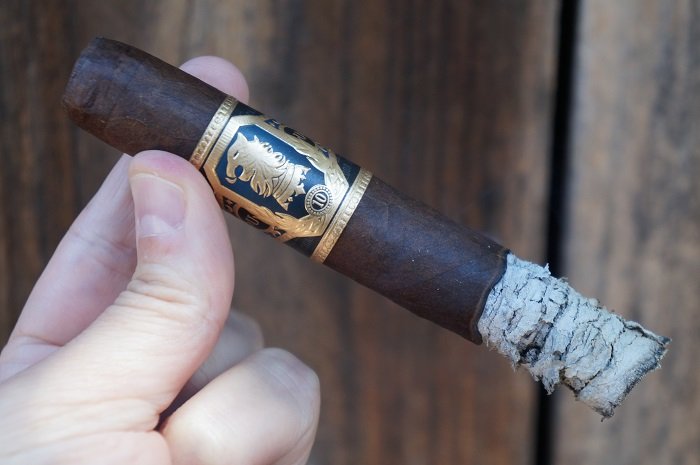 Aaron: The final third continues with the dry earth up front, toasted wood with light black pepper in the background. At a half inch in, the toasted wood becomes fairly heavily charred and the black pepper is no longer detectable. The retrohale is now dry earth and heavily toasted wood. The cigar wraps up with the dry earth and heavily charred wood. The strength in this third bumped up to medium-full.
Seth: The final third continues to deliver flavors of cream and rich earth. There are some chocolate and leather notes as well. Like it has been from the start, the cigar is smoking at a medium-full level for strength and body.
John: The last third begins with earth, dry cedar to finish and medium pepper taking up the post draw. Light plus strength citrus pushes back against the earth to establish in the main profile. As the last third progressed, bitterness returned to the post draw.
Jiunn: The final third is very similar to the second third. The only change is showing more minerals, but in a sharper and unrefined manner. Still plenty of gritty dirt earthiness and leather. Strength and body finishes the same medium plus and full, respectively. 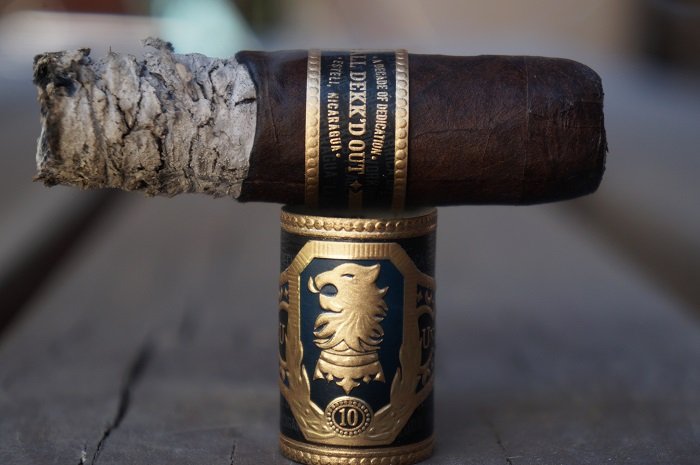 Aaron: The burn was straight throughout, but the cigar went out once in each the first and second thirds, requiring re-lights.
Seth: Burn was solid throughout. Thick burn line with some wavy aspects here and there. Overall, solid burn.
John: Two cigars were smoked for review, and both had relatively straight burns that corrected themselves at a few points. Ash was quite white.
Jiunn: Burn performance was almost perfect. The only negatives resulted from an uneven burn within the second third, requiring a couple touch-ups. 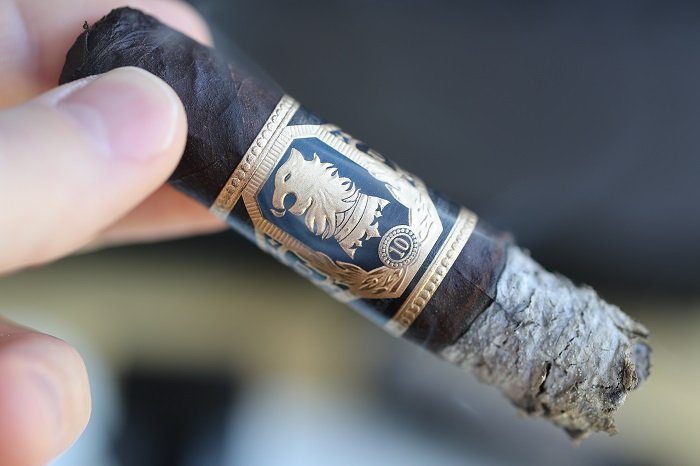 Aaron: The draw was perfect, with just the right amount of resistance that I prefer.
Seth: Perfect draw.
John: The first cigar reviewed had a slightly resistant draw, roughly 1-1/2 to 2 notches into the resistant spectrum. The second cigar smoked had a perfect draw, right in the ideal zone of resistance.
Jiunn: The draw on the other hand was perfect, giving the ideal air flow.

Aaron: The cigar was very dry earth dominant. The first third had some nice touches with the cocoa powder and cinnamon, but once those departed it became fairly average until the final third when the heavy char joined in. The Drew Estate Undercrown 10 Toro was just too dry earth focused, which isn’t a profile I really enjoy. There needed to be something else in the profile to balance things out. If you like earth focused cigars, you’ll really like this, but for me, I’d prefer a regular release Undercrown.
Seth: The Drew Estate Undercrown 10 Toro was a good cigar. It was a little one dimensional, and a little heavy on the earth, but there were some flavors that popped out throughout. I would have liked for a stronger finish, and I think that would have made a difference in the cigar. I am interested in smoking the blend in a smaller vitola offering, and really seeing how it smokes all around. I am sure the Toro does a good job of delivering the profiles of the blend, but I would like to see what a change from a 52 to a 50 does, and especially down to 43. Beautiful presentation.
John: The Drew Estate Undercrown 10 Toro delivered some interesting flavor combinations in the first third, but was fairly average through the second and last thirds for a slightly above average overall experience. The profile reminded me more of the Liga Privada No. 9 with it’s earthy Broadleaf, rather than the sweeter T52 or original Undercrown Maduro with the combination of Habano and Brazilian Mata Fina. There are a number of vitola offerings and I’ve often found that certain sizes will showcase the tobaccos in the best way. I intend to try all the offerings in the line until I find what I consider to be the best one. Construction was nearly flawless on the first cigar reviewed, and was flawless on the second cigar reviewed. Total smoking time averaged 2 hours and 3 minutes.
Jiunn: Highly anticipated but the Drew Estate Undercrown 10 Toro was an overall let down. While the first third gave a pleasant experience with full bodied chalky cocoa and accompanying earthiness, the first two thirds tipped the balance too much to being too earth and mineral forward. I would have appreciated much more if it held up to the likes of the first third. I’ll have to lay this down for a few months and revisit. But as of now, I can’t confidently say it is a good cigar and would much rather smoke the non anniversary Undercrown offerings.