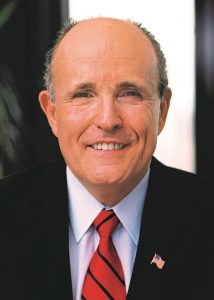 Another reason you’ll want to be at the IPCPR 85th Annual Convention and International Trade Show, July 10 – 14, 2017, at the Las Vegas Convention Center—keynote speaker Rudy Giuliani!

Rudy Giuliani – the chief executive of the largest city in the U.S., who much of the world turned to in a time of crisis, shares his unparalleled insights on leadership, courage and the most pressing issues of our time.

Celebrated by many as “Mayor of the World,” Rudy Giuliani provides a resolute voice in tackling the toughest domestic and international issues of our time—from long-standing global conflicts to terrorism and the new reality of cyber warfare to the future of health care reform and immigration to political leadership and insights on future elections. Never one to shy away from a battle, Giuliani almost single-handedly took on organized and white-collar crime in New York with a remarkable record of 4,000 convictions—one that very few attorneys can match.

Rudy Giuliani, a true cigar aficionado, knows how to tackle tough issues, provide critical leadership and build bridges. And he will no doubt inspire you with his insights on protecting freedom through vigilance and leadership.

Count on IPCPR to bring you powerful perspectives such as Giuliani’s and the unique opportunity to exchange ideas with peers from around the world. We’ll be announcing more speakers and details on the agenda for the 85th Annual Convention & International Trade Show in the weeks to come.