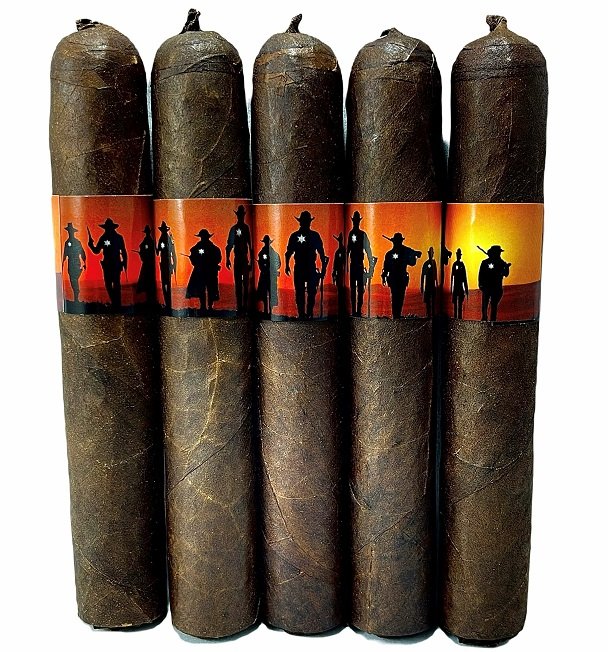 Protocol Cigars is proud to present their second shop exclusive cigar for 2021. The name on this offering is called The Law. The Law is for Omertà Cigar Company in Oklahoma City, Oklahoma. Like every shop exclusive cigar we try to capture the spirit of that shop and incorporate a law enforcement theme into that project. This project is no different. When one thinks of Oklahoma City the first thing that comes into mind are cowboys and the Wild West. How could Protocol Cigars incorporate a law enforcement theme into cowboys and the Wild West? The answer was simple… The Law. The Law was a term often used in old spaghetti western movies to describe law enforcement officials such as sheriffs, marshals, and other lawmen. The Law is a perfect fit to incorporate law enforcement into the Wild West.

The Law will be an annual limited edition, with 400 bundles of 10 and is a round Robusto 5×52. The Law is covered with a beautiful, dark, oily and toothy Mexican San Andreas Maduro wrapper which is draped on a Condega binder, covering Esteli and Jalapa fillers. The Law is made at The La Zona Factory in Esteli, Nicaragua and was blended by Hector Alfonso Sr. Like the Wild West the cigar is rugged and rustic. The Law is strong and full bodied with a small pigtail on the head, finished with a closed foot. “We wanted to give The Law a rustic look, something you would think you would have seen cowboys smoke in the Wild West. The look, the feel of the cigar in your hand, and when you smoke it screams the Wild West! This is a cigar you would think any Lawmen in the Wild West era would smoke while trying to capture their bounty!” said Juan Cancel, Co-owner and founder. The Law comes in a Brown Paper bundle of 10 with a MSRP of $95 and singles going for $9.50. “We worked tirelessly to give this project a rustic Wild West feel! The end result truly delivers. The cigar is rugged and bold, beefy, full bodied, full flavored and has full aroma with a long finish.” closed Kevin Keithan, Co-owner of Protocol Cigars.

The Law will debut at Omertà Cigar Company over the course of 3 days and at multiple locations. The first event will be Friday, June 4th, starting at 6pm CST, at Omertà Cigar Company, South Tulsa. The second launch event also coincides with Omertà’s 6th Year Anniversary Party. This extravaganza will be on Saturday, June 5th starting at 2pm CST, at the South Oklahoma City location. This event will also happen online at Puro Cigar House https://puro-cigar-house.myshopify.com/. This will be the only time the cigar will be offered to the public online. The weekend will culminate with a Fraternal Order of Police (FOP) Fundraising event on Sunday, June 6th starting at 3pm CST at The Wilshire in Oklahoma City.

Jarrett Jackson, Managing Partner said the following about the project… “The partners and I are excited to release The Law with the guys via Omerta Cigar Co and Puro Cigar House Website. The collaboration process has been a pleasure and we are looking forward to the multi-city and multi-day release events with our fellow Protocol Enthusiasts.”