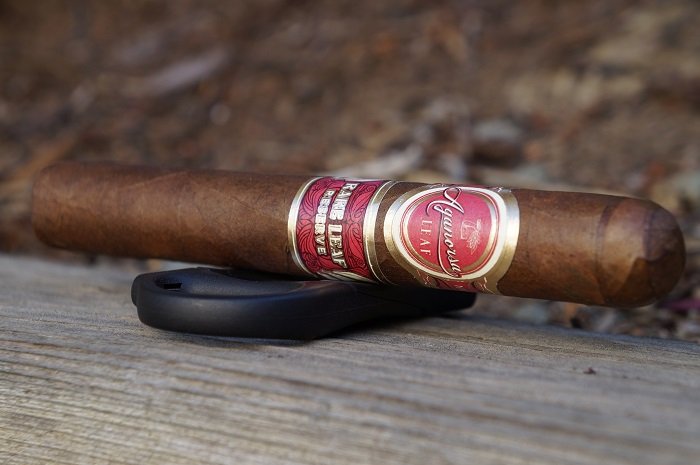 Aaron: The wrapper on the Aganorsa Leaf Rare Leaf Reserve Toro is medium brown and has a few lightly raised veins present. The seams are lifting a bit while the head has a well applied set of caps. There are two bands, both carrying a faded red, gold and creamy white color combination. The primary denotes the company name and the secondary denotes the line name. The secondary band can be hard to read in more direct light. The aroma from the wrapper is a mix of earth and nuttiness, while the foot brings wood, mustiness and red pepper spice. The pre-light draw brings slightly musty and aged cedar with a mild spiciness.
Seth: Finished with a triple cap that just pops, the wrapper sports this beautiful Colorado coloring that is showing some tooth and small to medium sized veins. There is this dark brown coloring with red throughout, and it has this leather like texture. The Aganorsa Leaf Rare Leaf Reserve Toro is firm in hand and the wrapper is giving off notes of tobacco, sweet spices and earth. The foot is showing similar qualities with some fruit notes.
John: The Aganorsa Leaf Rare Leaf Reserve Toro comes cellophaned, and the cigar is double banded. A UPC sticker holds the cello closed, and tears at the cigar name label, leaving the UPC intact. The wrapper had a smooth, chocolate brown appearance. For aromas from the wrapper, I picked up on aromas of spices, bread and dark fruit, with light cedar and hay buried underneath. From the foot, I picked out raisin, hay and light cedar.
Jiunn: The Aganorsa Leaf Rare Leaf Reserve Toro has an even caramel wrapper shade. Veins are neatly pressed, seams tight, bunch and roll even and head well wrapped. Aromas from the wrapper give cedar and biscuits. Aromas from the foot give white pepper and bread. Cold draw tells white pepper and paint thinner. 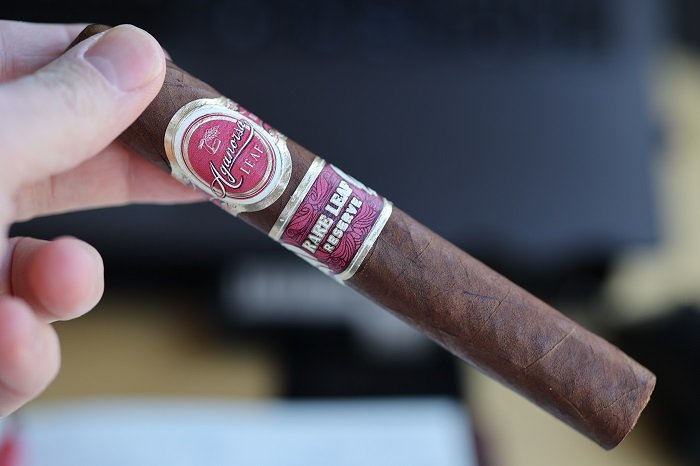 Aaron: The cigar begins with a mix of wood and complex baking spice. At a half inch in, the baking spice mellows as a light mustiness joins the profile. At an inch in, a light chalkiness appears as the baking spice has morphed into black pepper that has a long finish. The retrohale is lightly musty wood with a mild black pepper. As the third comes to a close, the musty wood is up front, black pepper in the middle and faint chalkiness in the background. The strength in this third was slightly above medium.
Seth: The cigar is slow to get going, but it starts out with this creamy and nutty profile. Almonds and heavy cream. There are some soft earth notes present as well, and it has a finish of peppery spices. There are some light tobacco notes present a well, and the cigar is smoking around a medium level for strength and body.
John: My initial flavor impressions consisted of wood, spices and a leather finish. Some bread and dry cedar as the first third started to settle in. As the cigar progressed, some citrus sweetness and general tobacco notes came though. The citrus was quite apparent from the smoke the cigar was putting out. Post draw cedar moved up to medium strength in the bottom half.
Jiunn: The first third tastes sort of like toned down typical Aganorsa. There’s sweetness no doubt, but it’s a synthetic type. That jumps out to me the most, but there are other flavors such as a slight metallic note, bread and baking spices. Retrohaling gives intensified synthetic sweetness and bread. The finish has that same mixture as the retrohale but less intense versions of it. Strength is medium-full, body is medium. 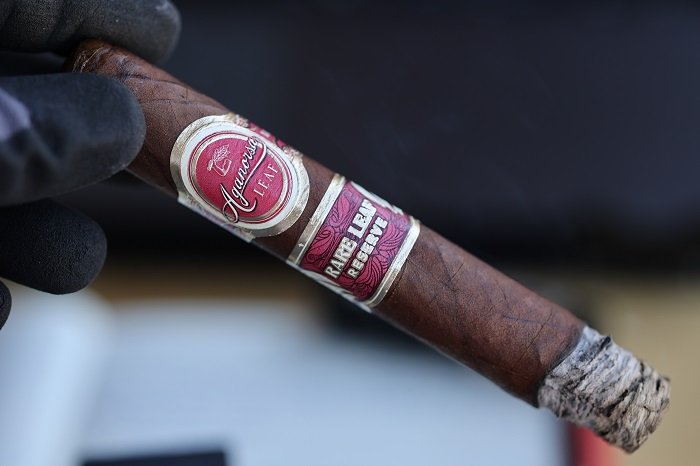 Aaron: The second third begins with the wood gaining a slightly toasted note. At a half inch in, the black pepper mellows, some light, dry earth joins the profile and the chalkiness has departed. The retrohale is now musty wood and light, dry earth. At an inch and a half in, the musty and slightly toasted wood is showing a lot of depth, with the dry earth in the middle and a very light black pepper in the background. The strength in this third remained at slightly above medium.
Seth: The second third delivers a little more spice than the first third and I am picking up some red pepper and clove notes. There are some cream and peanut qualities present as well, and the finish was that of earth, tobacco and wood notes. Like before, medium in strength and body.
John: Cedar was driving the profile in the second third, with bread undertones. Mild chocolate kept trying to push up, buried under the cedar. As the second third established itself, medium strength earth settled into the center of the profile. That earth continued to build as the cigar progressed, taking over the profile. The cigar started to take on some acrid notes, which went away after the re-light and a purge.
Jiunn: Towards the latter half of the second third, the profile starts to really deteriorate. There’s no more sweetness left, replaced by high levels of sharp, rear palate scratching pepper, and a metallic wasabi type of weird flavor combination. Strength and body remain medium-full and medium, respectively. 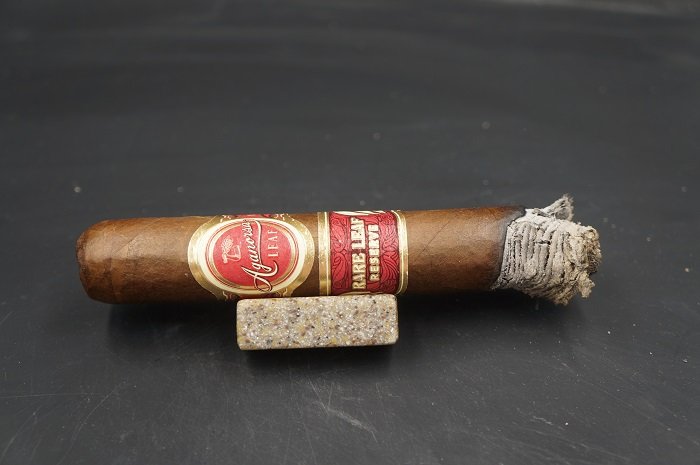 Aaron: The wood gains a heavier toast level going into the final third. At a half inch in, the black pepper is gone and the musty, toasted wood and dry earth are even. The retrohale is now just musty, toasted wood. As the cigar wraps up, the toast became very heavy, but the wood maintained it’s mustiness with the dry earth falling just behind. The strength in this third bumped up to medium-full.
Seth: The final third delivers earth and vegetal qualities. I am picking up some mineral and black pepper notes as well, and the finish is that of nuts, toast and cream. It has a slight harshness, but it is soft overall and fades in and out. In terms of strength and body, the cigar smokes at that medium level like before.
John: The final third started out with sweet citrus, cedar and earth that faded out to light plus. The earth moved into the middle again here, building up to medium strength. Slime mild acrid notes joined the post draw as the cigar progressed.
Jiunn: The final third’s flavor profile isn’t off-putting like the second third. But it is every bit average with bitter cedar, baking spices and minerals. Strength and body is unchanged at medium-full and medium. 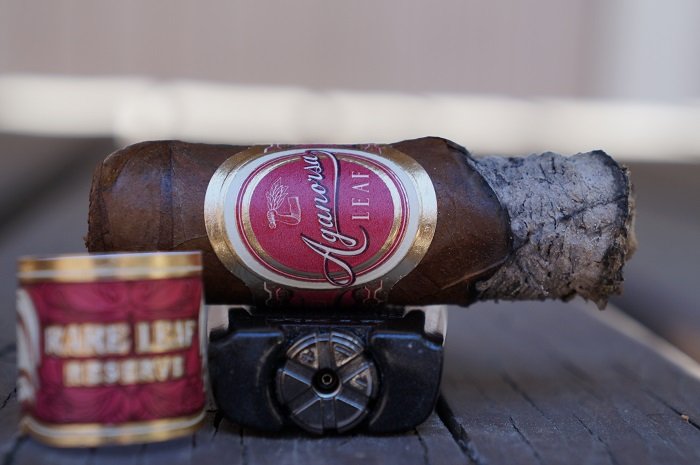 Aaron: The burn was slightly wavy throughout and the cigar went out once in the final third, requiring a re-light. The ash held on in inch and a half increments.
Seth: Great construction throughout.
John: The burn was relatively straight to begin, with ash holding on well past the inch and a half mark. The burn became uneven in the second third, necessitating a touch-up. As I continued, the cigar was clearly struggling to stay lit, and went out, requiring a re-light. Burn was again uneven in the last third, requiring a touch-up.
Jiunn: Burn performance was almost perfect. Just a couple minor deductions for an uneven burn, which required a couple quick touch-ups. 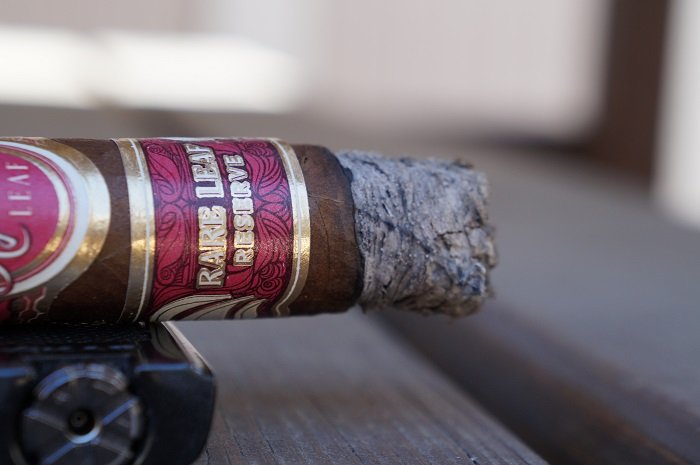 Aaron: The draw was perfect, with just the right amount of resistance that I prefer.
Seth: Beautiful draw from beginning to end. Perfect.
John: The draw was well into the resistant spectrum, roughly 3-1/2 to 4 notches.
Jiunn: As the cigar was packed full of tobacco, it looked like it attributed to the slightly tight draw.

Aaron: The cigar was pretty pleasant in the first third, but lost some complexity in the second third, settling with a basic profile of musty and toasted wood, dry earth and black pepper, and maintained that through the remainder of the smoking experience. I’d be interested in trying this blend in another vitola to see if it smokes differently, maybe maintaining some of that complexity a bit longer. For this Aganorsa Leaf Rare Leaf Reserve Toro, it just didn’t provide enough enjoyment through the entire smoking experience to make me want to come back to it with any regularity.
Seth: The Aganorsa Leaf Rare Leaf Reserve Toro is an improvement when comparing with recent TABSA and AGANORSA releases, but the cigar still lacks quality flavor and complexity that we saw in releases from 2017 and 2018. There is a slight bit of transitioning, but the cigar is still lacking in depth and complexity. There is great construction throughout though, and I am interested to see how the cigar ages. I felt that for a while there was a struggle with ingredients and chefs in the TABSA kitchen, but I am hoping this blend is a sign of better ingredients to come. I am hoping for better chef work as well.
John: The Aganorsa Leaf Rare Leaf Reserve Toro was a disappointingly mundane flavor profile that suffered from a resistant draw and some recurring burn issues. Although the first third showed some promise, the second and last thirds were linear and did not maintain my attention. This is not a cigar from Aganorsa I would return to, they have a fair number of offerings that I would find a significant step up, especially at this price point. Total smoking time was 1 hour and 59 minutes.
Jiunn: When I think about Aganorsa releases within the past year or so, I think the apple is still far from the tree. The Aganorsa Leaf Rare Leaf Reserve Toro is no different. It was such an unbalanced and sharp flavor profile, which is rarely said of the Aganorsa releases of the past. I’m not sure what’s going on at the factory and/or blending team, but there needs to be changes made. This is the opposite of what I love about Aganorsa.