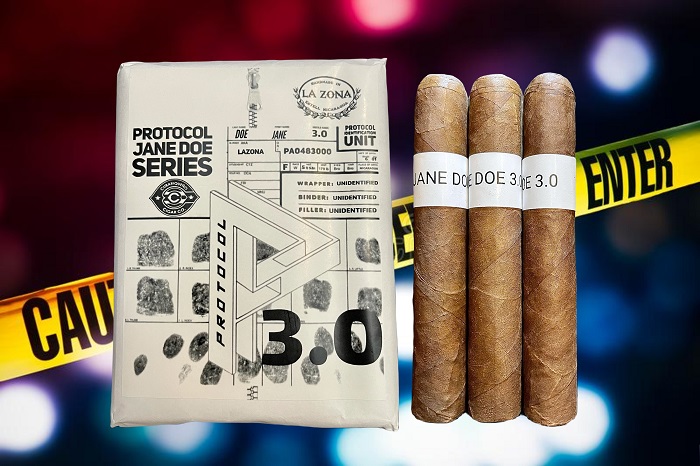 Protocol Cigars is once again proud to announce their third installment in the Jane Doe Series called the Jane Doe 3.0. Jane Doe is the name given to unidentified females until identification can be made at a later time. The cigars will come in a 10 count paper bundle with an MSRP of $95.00 per 10 count bundle and $9.50 per single cigar. The Jane Doe 3.0 will come in a 5 x 52 vitola. The cigar band is plain white paper with black lettering spelling out Jane Doe 3.0. What we can tell you at this time is that the cigar is medium bodied, smooth and creamy. Like the two prior Jane Doe installments, the wrapper, binder and filler are unidentified at this time. The only available information is the place of birth. It has been confirmed that the birthplace is Estelí, Nicaragua. To be exact, The La Zona Cigar Factory, under the watchful eye of Erik Espinosa and under the tutelage of Hector Alfonso Sr. Like prior installments in the series, it will be a true limited release with only 200 bundles made available, and just like all prior installments, they will never be released again, once they are gone they are gone forever.

This installment of the Jane Doe 3.0 will be released in partnership with The Royal Leaf for an in store event and a simultaneous online event for sales. The release date will be Black Friday, November 26th starting at 3pm EST, with online sales going at the same time. “The Jane Doe is female and we are please to be releasing her at a Female owned Cigar Shop. Dee Pitman has always been a great partner and we are pleased to offer this latest release to the public via The Royal Leaf located at: 118 N High St, Millville, NJ 08332 and online at: https://theroyalleaf.net, these will sell out quick!” added Juan Cancel owner of Protocol Cigars.