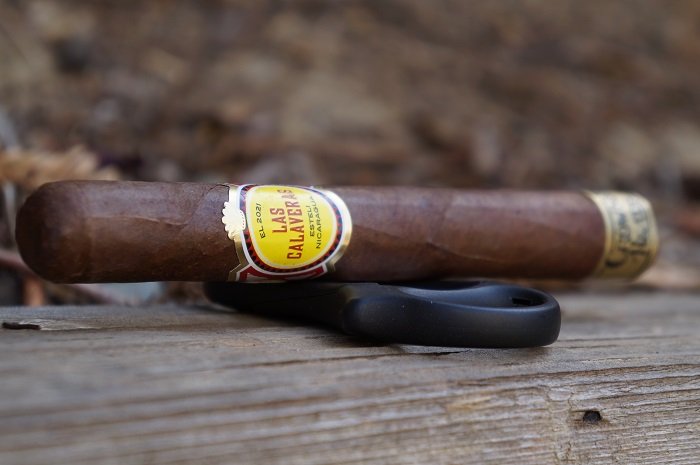 Aaron: The wrapper on the Crowned Heads Las Calaveras Edición Limitada 2021 LC48 is dark brown and has a decent number of raised veins present. The seams are smooth and caps well applied. There are two bands with the primary band having a yellow face along with red, white, gold and black. It denotes the line and year. The foot band is the gold and black band with the company name that adorns the foot of all of the more recent releases. The aroma from the wrapper is a mix of wood and dark earth while the foot brings wood, tobacco sweetness and some spice. The pre-light draw brings musty, aged cedar with some sugar crystal sweetness. There is also a mild spiciness on my lips.
Seth: The Crowned Heads Las Calaveras Edición Limitada 2021 LC48 is a beautiful cigar that has a great light Colorado colored wrapper. There are some Natural qualities present, and it has this faded antique furniture coloring. The wrapper is gritty and oily in texture, and there are veins present in texture that are medium in size. The aroma on the foot is that of rich barnyard qualities, and I am getting manure and rich spices. The wrapper is showing more leather qualities, but spices present there also.
John: The Crowned Heads Las Calaveras Edición Limitada 2021 LC48 comes in cellophane and does not have a UPC code or sticker. There is a primary band, along with a secondary foot band. Aromas from the wrapper included sweet bread, cedar and faint spices. From the foot, I picked up on hay, raisin and sweet tobacco.
Jiunn: The Crowned Heads Las Calaveras Edición Limitada 2021 LC48 presents a Colorado wrapper shade. Veins are well pressed, seams tight, bunch and roll even and head well wrapped. Aromas from the wrapper tell abundant wet barnyard. Aromas from the foot give the same wet barnyard, but with added white pepper spice. Cold draw gives white pepper and cedar. 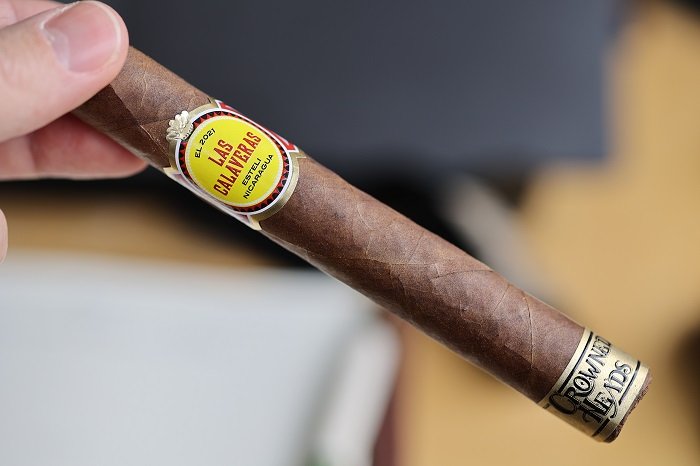 Aaron: The cigar begins with musty, toasted cedar, sharp baking spice and light sweetness. At a half inch in, the baking spice isn’t sharp anymore, but it is potent. At three quarters of an inch in, the baking spice has mellowed and the sweetness has dissipated. The retrohale is musty, toasted cedar and mild baking spice. As the third comes to a close, the musty, toasted cedar is up front and has gained a light smokiness to it while the baking spice is a bit behind. The strength in this third was slightly below medium.
Seth: The first third begins with this manure flavor profile that is paired with some seasoned wood and spice notes. There are pepper qualities present with that, and the finish has this sharp white cheese, coffee beans and a bread profile. In terms of strength and body, I would classify the cigar as medium-full.
John: The first third opens with cinnamon, bread, wood and a dry wood finish into the post draw. Pepper lingers on my lips between draws. Some minerality and earth is present on the retrohale, as the pepper joins a few retrohales in. That pepper is so intense that it begins to run over all the other flavors. At roughly the 10 minute mark, the pepper intensity begins to fall, as it, does some chalky chocolate comes through. Bread and baking spices combine with wood by the halfway point but the combination is unbalanced. Near the end of the first third, the profile becomes earth forward.
Jiunn: The first third’s flavor profile is a mixture of spicy and toasty. Toasted cedar and dry red pepper spice are the primary notes. There’s also a good amount of minerals backing up the spice and toasted notes. Retrohaling gives a stinging dry red pepper spice. The finish does a good job of filling my entire palate with a subtle dry red pepper spice and subtle minerals. Strength and body is medium. 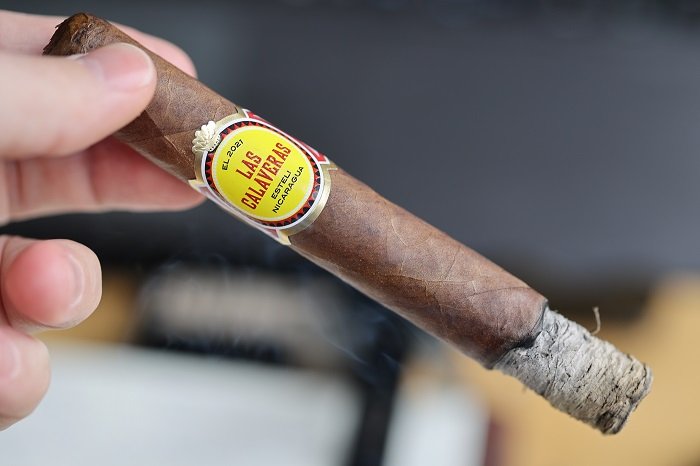 Aaron: As the second third begins, the baking spice picks up a bit while the light smokiness has gone away. The retrohale is now musty, toasted cedar and light, dry earth. At an inch in, a light, dry earthiness joins the profile. The third wraps up with the musty, toasted cedar and dry earth even with the baking spice in the background. The strength remained at medium.
Seth: The second third delivers a spicy flavor profile, and I am picking up dry earth, seasoned wood, red pepper spice, coffee beans and leather qualities. It is a strong flavor profile, and it lingers for some time on the palate. Like the first third, medium-full in strength and body.
John: Earth and wood take the cigar into the second third, as wood finishes along with pepper accents. Some bread joins the retrohale as the cigar continues, but it is being pushed aside by the strength of the earth at medium-plus.
Jiunn: The second third introduces a harsh minerality that is most evident on the finish. The profile is however still full of toasted cedar and dry red pepper spice. Strength and body is unchanged at medium. 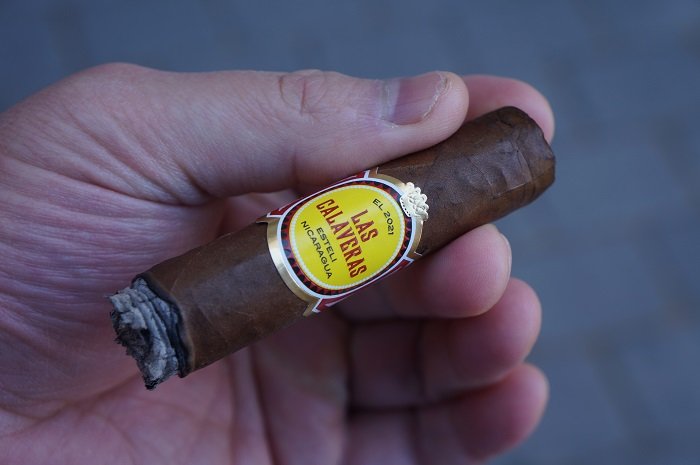 Aaron: The final third is a continuation of the second. The retrohale is an even mix of musty, toasted cedar and dry earth. At an inch in, the baking spice is now very mellow as the toast level becomes pretty heavy. The cigar wraps up with musty, heavily toasted cedar even with the dry earth and some mellow baking spice in the background. The strength bumped up to slightly above medium.
Seth: The final third delivers a profile that is peppery and spicy with wood and floral qualities present. Dry earth and leather are present as well, and it has a long finish. Like before, the cigar is medium-full in strength and body.
John: Lingering earth and minerality define the second third as it starts. Some mild creaminess pushes through on the retrohale. As the cigar settles in, mild bitterness takes up the center and there is a mild tannic wood finish. Dry cedar and earth combine on the post draw as the last third continues.
Jiunn: The final third alleviates some of the harsh mineral notes and instead focuses on toasted nuts. The overall profile is still intact with toasted cedar and dry red pepper spice. Strength and body finishes medium. 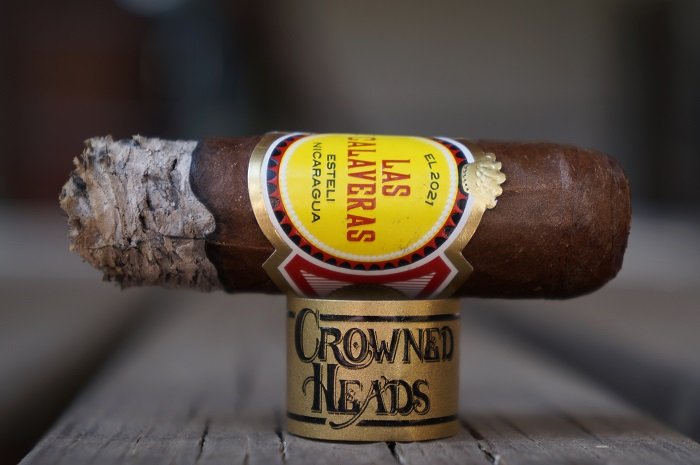 Aaron: The burn line was straight the entire way and the ash held on in inch and a half increments.
Seth: Nice burn from start to finish.
John: The burn is flawless with a straight ash that holds on up to 1-1/2 inch increments. In the second third, the ash drops once it hits the one inch mark.
Jiunn: Flawless burn performance. Even burn, tight ashes, cool burn and good smoke production. 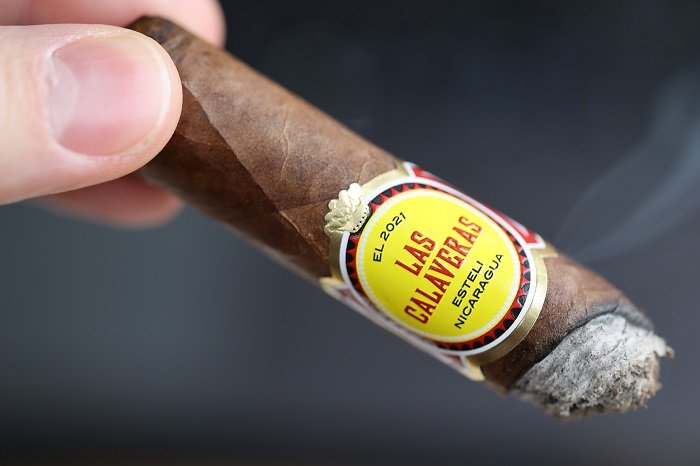 Aaron: The first inch of the cigar was quite nice with a good combination of flavors, but then the profile let off the gas and settled into a profile of musty, toasted cedar and baking spice. Some dry earth joined in about halfway and stayed even with the musty, toasted cedar. Construction was perfect. The Crowned Heads Las Calaveras Edición Limitada 2021 LC48 started well, but then transitioned into an average cigar after the first inch. It’s a bit of a bummer. Curious to see how the others fared, but based on my experience, probably not something I see myself returning to.
Seth: I was not impressed with the Crowned Heads Las Calaveras Edición Limitada 2021 LC48 offering. I thought it had a great appearance and overall pre-light presentation, but the flavor profile was too sharp throughout the entire smoking experience. It lacked balance and what I hoped was a strong start to grab my attention was simply the flavor profile that was going to be present throughout. Those that have like Las Calaveras will most likely enjoy it.
John: The Crowned Heads Las Calaveras Edición Limitada 2021 LC48 delivered a profile of intense pepper, earth and tannic wood through the review experience. None of the flavors seemed to coalesce and so I didn’t find myself interested and engaged. Given that these are a yearly limited, I am disappointed in the 2021 offering. Burn and draw were flawless. Total smoking time was 1 hour and 57 minutes.
Jiunn: Another year, another Las Calaveras. It almost feels like this release is my reminder for the upcoming cool Fall season. After smoking this year’s version, it’s also reminding me of how disappointed I am of these releases since the original release in 2014. The Crowned Heads Las Calaveras Edición Limitada 2021 LC48 lacked in depth of flavors, and the harsh mineral notes certainly does not help the enjoyment factor. Will have to pass on this year’s release and look forward to next year.