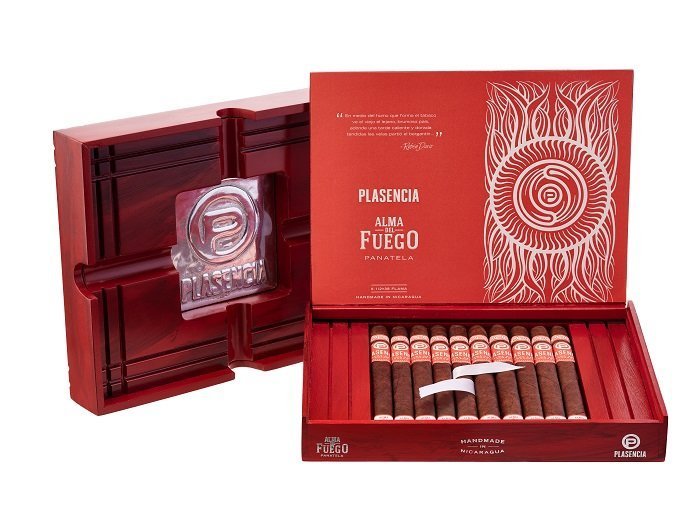 MIAMI – June 5, 2019 – Plasencia Cigars, one of the world’s leading premium tobacco growers, announces the launch of Alma del Fuego, the third of five cigars that make up its signature Alma Series. The official debut will take place at this year’s International Premium Cigar & Pipe Retailers Association (IPCPR) trade show, from June 28 – July 2 at the Sands Expo and Convention Center in Las Vegas, Nev.

“We are beyond grateful and excited for the opportunity to launch the third cigar of our already popular Alma Series collection at IPCPR, amongst our fellow cigar aficionados,” announced Nestor Andrés Plasencia, CEO of Plasencia Cigars. “Alma del Fuego is a manifestation of our ongoing commitment to offer top-quality cigars to both our retailers and consumers, and to continue building on our family’s over 150-year tobacco legacy.”

Alma del Fuego, which translates to “Soul of the Fire,” is a representation of the volcanic soils that stem from the iconic Ometepe Island in Nicaragua, the land where the majority of the filler tobacco leaves for this cigar were harvested. A 100 percent Nicaraguan blend, Alma del Fuego radiates passion and amplifies Plasencia Cigars’ efforts to provide the industry with a high-quality and innovative smoke.

The new cigar offers a hint of spice, complemented by savoring notes of tangerine, roasted cashews, and guava wood. Plasencia Cigars has carefully selected sun-grown wrappers from its fields in Jalapa Valley to further enhance the cigar’s strength and sweetness. In comparison to traditional wrappers, the leaves used to craft the Alma del Fuego receive a higher amount of sunlight exposure, highlighting the cigar’s bold and complex notes.

The Alma del Fuego will be available in three sizes: the Candente, a 5 inches by 50 ring gauge robusto; the Flama, a 6 ½ inches by 38 panatela; and Concepción, a 6 inches by 54 toro. The newest cigar of the Alma Series will be available to consumers mid-July in a ten-count box that doubles as an ashtray.