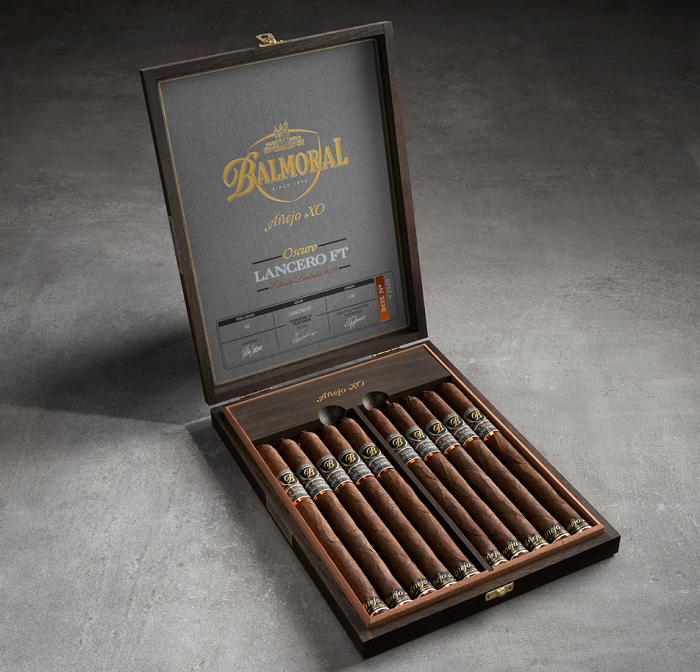 September 23rd, 2019 (Bradenton, Fla.) – Royal Agio Cigars formally announced today that they are releasing the Balmoral Añejo XO Oscuro Lancero FT Edición Limitada. This is the second limited production lancero vitola released from Balmoral, which follows previous releases of the original Balmoral Añejo XO Lancero FT Edición Limitada. A total of 2,650 boxes have been produced for global distribution, with only 500 boxes available for the U.S.

The original Balmoral Añejo XO Lancero Flag Tail (FT) Edición Limitada was the first lancero vitola released under the Balmoral brand umbrella, and it quickly became a favorite among premium cigar smokers who prefer lanceros. Balmoral is now releasing its second lancero, this time in a fuller-bodied blend, with the Balmoral Añejo XO Oscuro Lancero FT Edición Limitada. Availability is limited to a total of 2,650 boxes worldwide, with only 500 individually numbered boxes allocated to the U.S. As always, current Balmoral retailers will be given priority for this special, limited production release, with shipments beginning in October.

The Balmoral Añejo XO Oscuro Lancero FT Edición Limitada (7 x 40; MSRP $12.95) is crowned with a sun-grown, stalk-cut Mexican San Andrés wrapper, and blended with a Dominican Olor binder and Nicaraguan, Dominican and exclusive Brazilian Mata Norte fillers that will embrace your palate with complex notes of dark chocolate, espresso and black pepper that finish with a smooth, underlying natural sweetness.

When asked about the release of this limited production cigar, Boris Wintermans, 4th Generation CEO for Royal Agio Cigars stated, “This is a special release for Balmoral that will also certainly excite the senses, and I am personally very excited to share it with cigar lovers everywhere. While the introduction of the Añejo XO Oscuro blend was itself a noteworthy discovery, the length and ring gauge of the lancero brings with it an intensification that is closer to the core of this exceptional blend.”