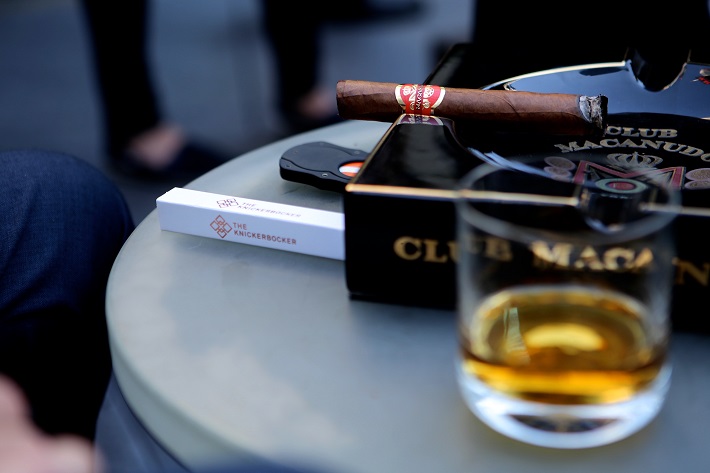 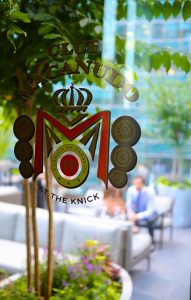 “We are very excited to kick off the rooftop season with our new partner and headliner Club Macanudo,” said Shawn Hauver, managing director of The Knickerbocker. “The brand and philosophy of Club Macanudo compliments The Knickerbocker’s ongoing reputation as an elegant haven for socializing, business networking and indulging in the very best that New York City has to offer.”

Nestled in the plush Broadway Pod overlooking Times Square, guests at Club Macanudo at The Knick will enjoy a connoisseur’s selection of world-famous premium cigar brands including Macanudo®, Cohiba®, CAO® and others, along with signature cigar and drink pairings, cut and light demonstrations and special events, amidst sweeping skyline views.

Club Macanudo, located at 26 East 63rd Street, is an exclusive cigar lounge in the heart of New York’s Upper East Side providing an elegant oasis for smokers and non-smokers to conduct business, enjoy a romantic evening, or catch up during a stylishly casual night out with friends. Expanding its presence to The Knickerbocker strategically places Club Macanudo in a scenic outdoor location that caters to New Yorkers and elite travelers from across the globe.

Alan Willner, vice president of marketing for General Cigar, parent company of Club Macanudo said, “This is an exciting time for Club Macanudo. Having recently celebrated our 20 year anniversary, and with the launch of our partnership with The Knickerbocker, we are uniquely positioned to share the brand’s passion for creating memorable moments and curated experiences with an even broader clientele.”

Rooftop entertainment programming for the year ranges from the monthly-themed Full Moon Party series to the most anticipated New Year’s Eve extravaganza with the best views of the famous Waterford Crystal Ball standing just 150 feet away.

About The Knickerbocker
The Knickerbocker, a member of Leading Hotels of the World, reopened its doors in February 2015 as the only Five-Star hotel in Times Square, after completing an expansive $250 million renovation by acclaimed interior designers Gabellini Sheppard. The Beaux Arts monument to New York’s coming of age is situated at the southeast corner of 42nd Street between Broadway and Bryant Park. The hotel originally opened in 1906 by John Jacob Astor IV and welcomed both glitterati and dignitaries including such notables as Enrico Caruso, John D Rockefeller and F. Scott Fitzgerald. A New York City landmark, The Knickerbocker boasts 330 guest rooms including 31 suites; a signature restaurant and bar, Charlie Palmer at The Knick; St. Cloud—a 7,800-square-foot rooftop bar with a cigar lounge; a 2,200-square-foot event space for up to 160 guests; a ground level café, Jake’s; and a state-of-the art fitness center. The Knickerbocker is located at 6 Times Square, New York, NY 10036. For reservations or more information visit theknickerbocker.com or call 212.204.4980; 855.86K.NICK (5.6425). Follow Knickerbocker on Facebook, Instagram and Twitter. #KnickofTime

About Club Macanudo
Club Macanudo is owned by General Cigar, a leading manufacturer and marketer of handcrafted cigars for the premium market in the US. The company is owned by Scandinavian Tobacco Group. Committed to delivering cigars of the finest quality, General Cigar’s skilled artisans produce Macanudo®, Cohiba®, La Gloria Cubana®, Partagas®, CAO®, Punch®, Hoyo de Monterrey®, Excalibur® and several other leading premium brands in the company’s Dominican, Honduran and Nicaraguan factories. In addition, the company cultivates proprietary tobacco which is used exclusively in its blends and has a dedicated R&D practice that develops new varieties of tobacco and revitalizes vintage seeds. Based in Richmond, VA, General Cigar sells through wholesalers and retailers in the US. General Cigar also operates Club Macanudo®, a cigar bar in New York City. Read more: www.cigarworld.com.

About Highgate:
Highgate is a premier real estate investment and hospitality management company widely recognized as an innovator in the industry. Highgate is the dominant player in U.S. gateway markets including New York, Boston, Miami, San Francisco and Honolulu. Highgate also has an expanding presence in key European markets through properties in London, Paris, Barcelona, Vienna and Prague. Highgate’s portfolio of global properties represents an aggregate asset value exceeding $10B and generates over $2B in cumulative revenues. The company provides expert guidance through all stages of the hospitality property cycle, from planning and development through recapitalization or disposition. Highgate also has the creativity and bandwidth to develop bespoke hotel brands and utilizes industry leading proprietary revenue management tools that identify and predict evolving market dynamics to drive outperformance and maximize asset value. With an executive team consisting of some of the industry’s most experienced hotel management leaders, the company is a trusted partner for top ownership groups and major hotel brands. Highgate maintains corporate offices in New York, London, Dallas, Chicago, and Seattle. For more information, visit highgate.com.

About FelCor
FelCor, a real estate investment trust, owns a diversified portfolio of primarily upper-upscale and luxury hotels that are located in major and resort markets throughout the U.S. FelCor partners with top hotel companies to operate its properties under globally renowned names and as premier independent hotels. Additional information can be found on the company’s website at www.felcor.com.