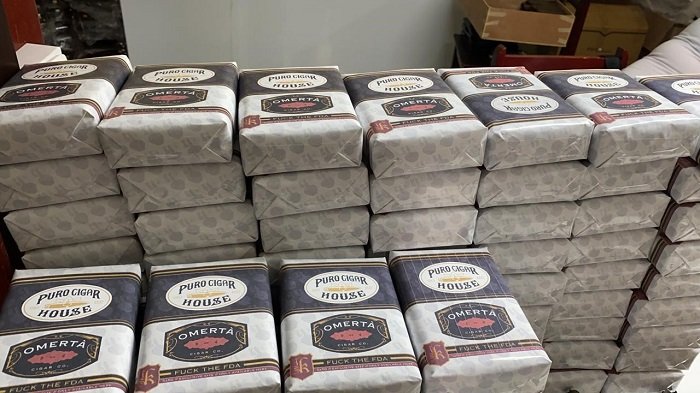 Jas Sum Kral is releasing a shop exclusive 5×50 Robusto of the Fuck the FDA blend. A smaller version of the regular production vitola which measures 6×52. Only 500 bundles of 10 cigars are available. The blend is exactly the same with a Mexican San Andres wrapper over an undisclosed filler and binder. The cigars are rolled in July of 2020 and have been aging in the aging rooms of Tabacalera Aragon S.A. since. The Fuck the FDA in a 5×50 Robusto is a full-body cigar that shines in this size.

This release is a shop exclusive for Omerta Cigar Company and their online retail site Puro Cigar House.

Win a gun If you buy a bundle of the Fuck the FDA Robusto from these Omerta Cigar Company locations (South OKC, South Tulsa, Monroe, La, or Puro Cigar House site) and you’ll receive a raffle ticket. One bundle is one ticket. With that ticket, you can win 1 of 2 firearms (pending gun retailer’s background check).

All tickets will be compiled together and drawn live on Sat, May 15th.

The cigars will be released on May 14 (South Tulsa) and May 15 (South OKC, Monroe, LA, and Puro Cigar House website) during a quadruple-header release event at the Omerta Cigar Company locations.

Jas Sum Kral owner and founder Riste Ristevski will be Live In-Person in South Tulsa on the 14th and South Oklahoma City on the 15th of May.

Monroe, LA, and Puro Cigar House will release the cigars on Sat, May 15th coinciding with the South OKC Main Event!

The official afterparty takes place at the STAG Whisky and Cigar Bar from 9 PM on Saturday, May 15th.