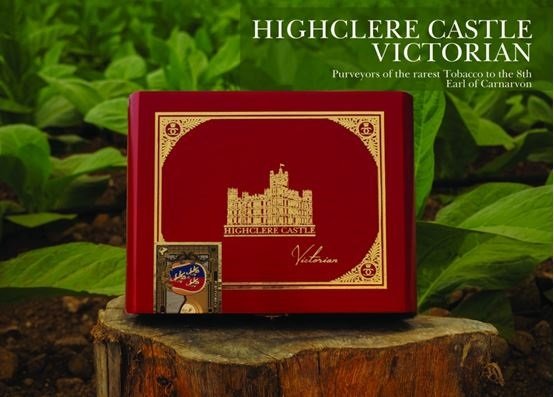 Globally recognized as the iconic face of the award-winning television drama, Downton Abbey, Highclere Castle partnered with Foundation Cigar to craft a cigar reminiscent of the style enjoyed in England in the early 19th century. Highclere’s rich cigar history goes back to 1862, when cigars were first introduced to England. The tradition at Highclere Castle has always been to retire to the library after dinner for a cigar and spirits.

Highclere Castle Cigar Company partnered with world-renowned cigar producer Nicholas Melillo, whose blend of the Wise Man Maduro earned Cigar Aficionado’s #3 Cigar of 2018, to oversee the blend creation and production of the cigar. Melillo formed Foundation Cigar Company in 2015 to craft hand-made cigars in Estelí, Nicaragua, and the Highclere Castle Victorian is the latest in Foundation’s award-winning line up.

The Highclere Castle Victorian is wrapped in Habano Ecuador, harkening back to the very first cigars to be imported into England in the Victorian era. The flavor profile of the cigar was created as a tribute to the style of cigars most popular during Victorian times, when smoking rooms became the fashion in grand country homes and castles. The previously released Highclere Castle Cigar was designed when the Highclere archivist discovered letters and personal account records of the Carnarvon’s cigar purchases in the early 1900s from dealers in London as well as the Ritz Hotel. Melillo subsequently crafted a cigar that reflects that historic flavor profile and smoking style.

The new Victorian is a “full-bodied cigar delivering notes of nougat, cedar, cinnamon, and leather,” said master-blender Nicholas Melillo. “This is some of the rarest and highest quality wrapper that I have been able to source, based on 20 years of building relationships with farmers and exceptional tobacco growers.”

George Carnarvon, the current 8th Earl Carnarvon, owner of Highclere Castle and farmer of the 5,000-acre estate, is an active partner in the endeavor. “Highclere House was transformed into the inspirational Victorian Castle, much loved today, during a time of confidence and exploration in the world. Cigars were smoked at home by leading statesmen, such the Prime Minister Lord Salisbury, a close friend of my great, great grandfather. In fact, Queen Victoria’s, husband, Prince Albert, helped improve Anglo-French relations by smoking cigars with Napoleon III. Good food, good wine and the best cigars have been part of our weekends, entertaining friends and guests from around the world.”

The cigar will be launched at the International Premium Cigar & Pipe Retailers Association’s (IPCPR) Annual Conference in Las Vegas on June 28, 2019. The first release will be limited, and cigars will be available in select cigar lounges and tobacco shops across the United States by August 2019.