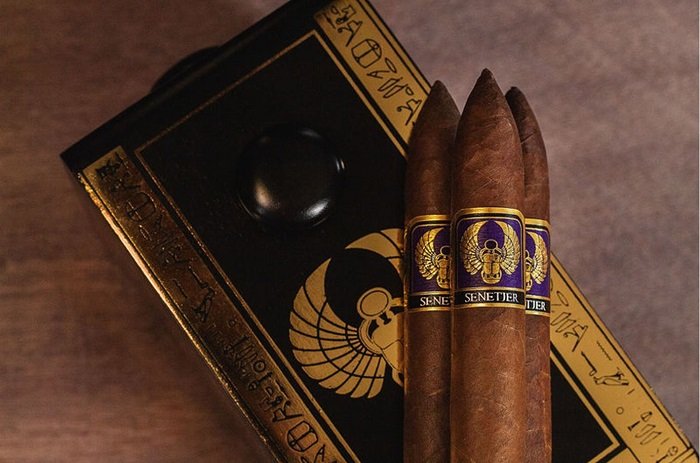 Foundation Cigar Company announces it has begun to ship its Highclere Castle Senetjer to select retailers throughout the county. Senetjer will strategically start to ship West Coast to East Coast, with the first fulfillment of product landing for everyone by the end of November. A subsequent fulfillment of orders will happen at the start of December, in advance of the holiday season.

Highclere Castle Senetjer is a one-time limited-edition perfecto crafted to commemorate the 100th anniversary of the unearthing of Egyptian Pharaoh Tutankhamun’s tomb. King Tut’s tomb was discovered by the famed archeologist Howard Carter and funded by the great-grandfather of Lord Carnarvon George Herbert.

To celebrate this amazing historical find, Foundation owner Nicholas Melillo teamed up with the Herbert family to create this limited-edition cigar which comes in a decorative box designed to replicate one found in the tomb. In collaboration with archaeologists Colleen and John Darnell, Highclere Castle had been translated into ancient hieroglyphics and inscribed on the box facing. Senetjer is the ancient Egyptian word for incense, which directly translates to “of the gods.”

“I have been in love with the culture and history of Egypt since I was a little boy. It is a great honor to work on this project with Lord Carnarvon and Adam von Gootkin. This product is truly something unique and special.” says Melillo.

Highclere Castle Senetjer is a stunning 6 ¾ by 52 ring gauge perfecto composed of an Ecuadorian Habano wrapper with Brazilian Mata Fina binder and well-aged undisclosed fillers, packaged in 12 count boxes with a suggested retail price of $33.00 per cigar.