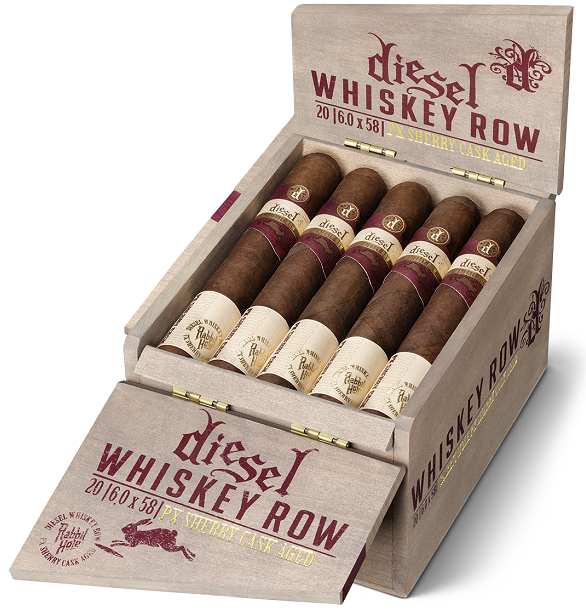 Diesel Cigars and Rabbit Hole Bourbon have reignited their partnership with Diesel Whiskey Row Sherry Cask, a new, three-cigar collection shipping to all channels on June 3, 2019.

Diesel Whiskey Row Sherry Cask is a cigar with epic depth and sublime flavor. Developed by Justin Andrews, blended by AJ Fernandez and handcrafted at Tabacalera AJ Fernandez in Esteli, Diesel Whiskey Row Sherry Cask features Nicaraguan-aged tobaccos cultivated on three continents. This exciting new collection once again calls upon a proprietary aging process developed by AJ to deepen the complexity of the smoking experience by barrel-aging the binder leaves.

Diesel Whiskey Row Sherry Cask is centered around a rare Arapiraca leaf from Central Brazil’s Alagoas region. This binder leaf was selected for aging in Rabbit Hole’s Pedro Ximénez Sherry barrels to bring forth subtle notes of honey, vanilla and molasses. When blended with spicy Nicaraguan Habano and crowned with a lustrous Connecticut Broadleaf wrapper, this Maduro cigar is a study in contrast, as cigar meets bourbon, salty meets sweet and earth meets spice.

Justin Andrews, senior brand manager for Diesel cigars said, “With Diesel Whiskey Row Sherry Cask, we set out to expand the Diesel portfolio by offering cigar and spirits lovers a deeper sensory experience and I believe we have delivered that in spades. This new blend is perfectly suited to pairing with a fine spirit, stands up equally well on its own, and has all the makings of another runaway success for Diesel.”

Kaveh Zamanian, founder and whiskey maker of Rabbit Hole said, “For our second collaboration with Diesel, we selected our rich and aromatic Pedro Ximénez sherry casks for AJ to use in the tobacco aging process because we knew they would lend a stunning complexity to the blend. ‘Sherry Cask’ speaks to the power of our partnership with Diesel and our collective focus on combining heritage technique and refined innovation to heighten the experience of fine cigars and spirits.”

Diesel Whiskey Row Sherry Cask will be available in three sizes, each presented in 20-count wooden boxes that give a nod to Rabbit Hole’s unique branding.

Diesel Whiskey Row debuted in June 2018 and marked the first collaboration between Diesel and Rabbit Hole. It was the first cigar to feature a binder leaf aged in Rabbit Hole’s bourbon barrels and generated a significant following among cigar lovers nationwide.