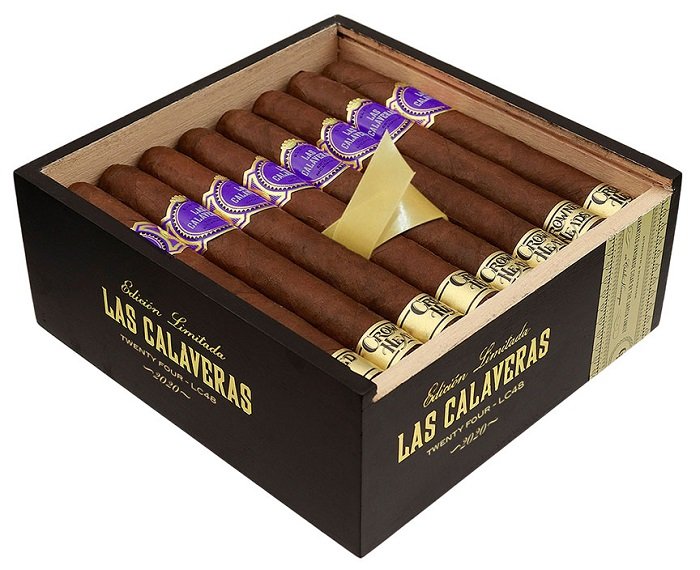 First introduced in 2014, Las Calaveras was born as a tribute to those who have passed away in the previous year, and is intended to be a celebration of life and memories made, as opposed to a mournful symbol of sadness and death. Every year, the Las Calaveras band is adorned with the initials of four individuals who’ve passed the prior year, one set of initials emblazoned upon each of the four coins on the sides of each band. Cigars are presented in 24-count boxes, three rows of eight cigars each, as the number “8” is a symbol of infinity as in everlasting life, and the three rows signify the beginning, middle, and end of life’s cycle.

“Las Calaveras has been one of our most sought-after annual releases since 2014,” commented Crowned Heads co-owner/founder, Jon Huber. “We felt that this year was time for a hard reset, of sorts, in that we are scaling total production back to the original release numbers of only 1,000 boxes per vitola, thus ensuring that this year’s release will be even more in demand.” The Las Calaveras EL 2020 is an all new blend of Nicaraguan binder and filler tobaccos, finished with a Habano (Oscuro) wrapper. The flavor profile may be described as medium-plus to full-minus, with an intense yet rich core structure. Offered in three vitolas, along with a 4-cigar sampler that includes one of each vitola along with a sampler-exclusive Torpedo (61/8″ x 52), the Las Calaveras EL 2020 will have a suggested retail price range of $10.95 to $12.95 per cigar.

Las Calaveras EL 2020 is manufactured at My Father Cigars, S.A., in Esteli, Nicaragua. Total production is limited to 1,000 (24-count) boxes per vitola, along with five-hundred total samplers. Shipping will begin July 2020.