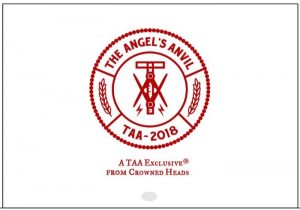 Crowned Heads will debut the fifth installment of “The Angel’s Anvil” series at the upcoming 50th Annual Tobacconists Association of America (TAA) convention and meeting, to be held at Casa de Campo in La Romana, Dominican Republic, April 29- May 3.

The Angel’s Anvil–TAA Exclusive 2018 will be manufactured at Tabacalera La Afianza, S.A., under the supervision of industry icon, Ernesto Perez-Carrillo. The 5 1/2 x 52 ‘Genios’ vitola will be comprised of a robust blend of Nicaraguan binder and filler tobaccos, finished with an Ecuadorian Sumatra wrapper. “As this is our fifth year of producing our TAA Exclusive cigar, and we have a lot of ties to the Dominican Republic, we wanted to bring something unique and novel, while paying homage to the Dominican Republic,” commented Crowned Heads co-founder, Jon Huber. “This will be our first time utilizing an Ecuadorian Sumatra wrapper on The Angel’s Anvil, and the colorway of the packaging was certainly inspired by the colors of the Dominican Republic flag.”

Total production of The Angel’s Anvil–TAA Exclusive 2018 will be limited to 1,000 (20- count) boxes, with a suggested retail price of $11.50 per cigar. Shipping is expected to begin in May/June.