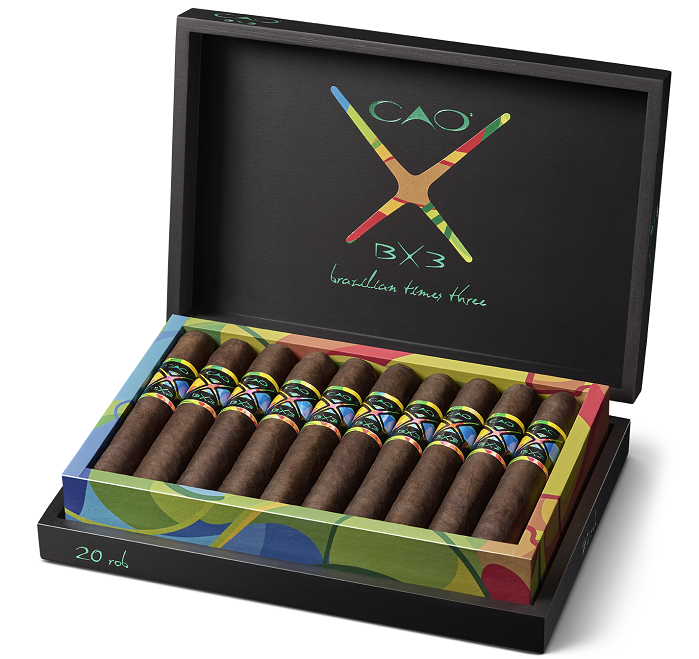 CAO has always had a rebellious streak (think MX2, CX2, LX2), and the brand’s maverick approach to blending is taking another leap forward through its latest expression: CAO BX3.

BX3 is a new collection that harnesses “three times the Brazilian tobaccos” in one robust blend.

Focusing on the primary growing regions of Northeastern Brazil, CAO BX3 is made with sweet and aromatic Mata Fina and hearty, vibrant Arapiraca tobaccos that are used as wrapper, binder, and filler in an exciting, four-country blend.

Ed Lahmann, CAO’s senior brand manager said, “Being trailblazers of tobacco is in CAO’s DNA, and with BX3, we’re continuing to pilot the path. Our inspiration was the legendary X series which had put our blending expertise on the map. With BX3, we set out to take the best of Brazilian tobacco and bring it to the next level. The easy thing to do would have been to make a Brazilian puro. Our blending team went that route, and it felt like we were just dialing it in. So they kept at it, peppering in Nicaraguan, Honduran, and Mexican tobaccos in just the right proportions to add character, dimension and layers to the smoke. We’re really proud of the way the blend turned out. To us, BX3 is everything a Brazilian-centric smoke should be. It’s memorable, savory and thought-provoking and it complements our portfolio beautifully.”

Handcrafted in Nicaragua at STG Estelí, CAO BX3’s is enrobed in a Brazilian Mata Fina wrapper, has a Brazilian Arapiraca binder and a blend of rich and robust filler tobaccos from Brazil, Nicaragua, Mexico, and Honduras. All told, the tobaccos create a medium-bodied smoke, that’s rich in character and deeply enjoyable with notes of espresso, dark chocolate, cinnamon, allspice, cayenne, and white pepper.

CAO BX3 will be a full-time line, available in all channels. The three-frontmark collection is packed in boxes containing 20 cigars and will begin shipping in the first week in July.