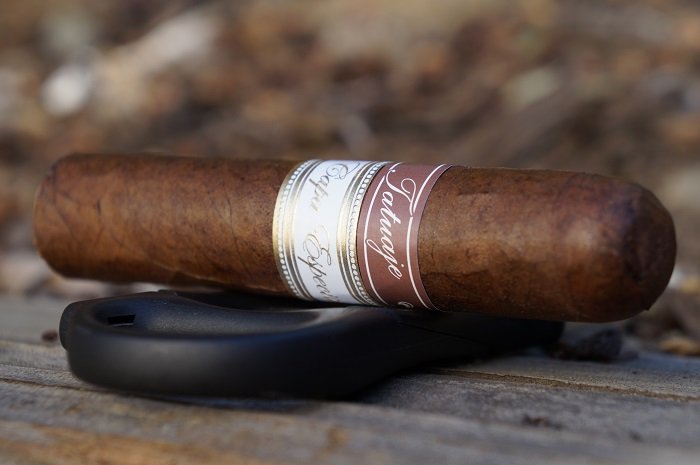 Aaron: The wrapper on the Tatuaje Cohete Capa Especial is medium brown with some darker spots and lines on it. There are some lightly raised veins present, the seams are also a bit raised and the caps are decently applied. There are two bands, with the primary being the traditional brown label design and the secondary being the white and gold Capa Especial band used on other lines. The aroma from the wrapper is a mix of wood and earth while the foot brings wood and light tobacco sweetness. The pre-light draw brings a lightly musty, aged cedar.
Seth: This petit Tatuaje Cohete Capa Especial is finished with a lovely Natural to Maduro wrapper that has small veins throughout and lovely tooth. The triple cap is lovely, and the cigar is firm throughout. The aroma on the foot is of light spices, barnyard, sugar and stone fruits, while the wrapper is giving off notes of chocolate, leather and earth.
John: The Tatuaje Cohete Capa Especial comes without cellophane and does not have a UPC sticker. The cigar is double banded with a brown Tatuaje main band and a ‘Capa Especial’ secondary band in white and gold. Aromas form the cigar included an intensely aromatic Spanish cedar. From the foot, light tobacco, hay and wood.
Jiunn: The Tatuaje Cohete Capa Especial has a near Colorado Maduro wrapper shade. Veins are well pressed, seams tight, bunch and roll even and head finished off well. Aromas from the wrapper tell milk chocolate and subtle cedar. Aromas from the foot give barnyard and a hit of white pepper spice. Cold draws reveal cedar, dry red pepper spice and hay. 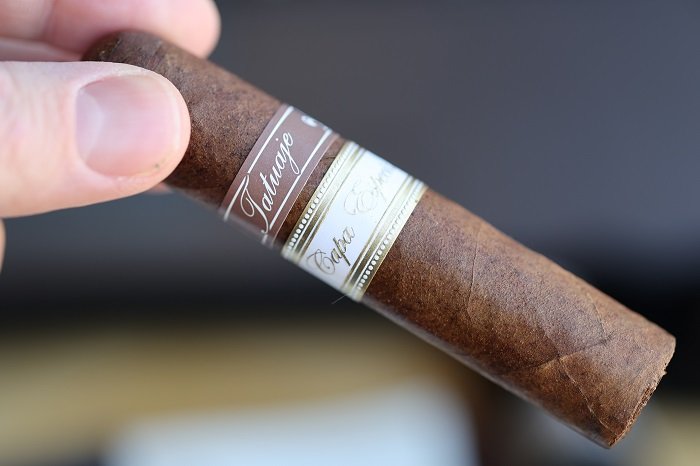 Aaron: The cigar begins with lightly toasted oak, earth and some bold baking spice. At a quarter inch in, a light mustiness joins the profile. The retrohale is lightly musty, toasted oak and mild baking spice. At an inch in, a light chalkiness becomes present. As the third comes to a close, the profile is musty, toasted oak up front with dry earth and baking spice a bit behind and light chalkiness in the background. The strength was right at medium.
Seth: The first third starts out with some lovely stone fruit notes that are paired with a great cinnamon and red pepper spice. Chocolate qualities present as well, along with some hazelnuts, earth and leather. Medium in strength and body. Beautiful first third.
John: The first third leads off with baking spices, bread and wood as intensified baking spices and wood combine into the post draw. Some mild tannins joins the wood finish as it settles in. By the 20 minute mark, chocolate is present through the retrohale.
Jiunn: The first third is balanced, doing a good job of touching all the major parts of a cigar. It has dry red pepper spice, it’s earthy in cedar, naturally sweet and creamy driven by roasted nuts. The spice kicks it up on the retrohale as well as the finish, making it drawn out. The body has a good heft to it, making it medium-full, and strength is boosted as well, also making it medium-full. 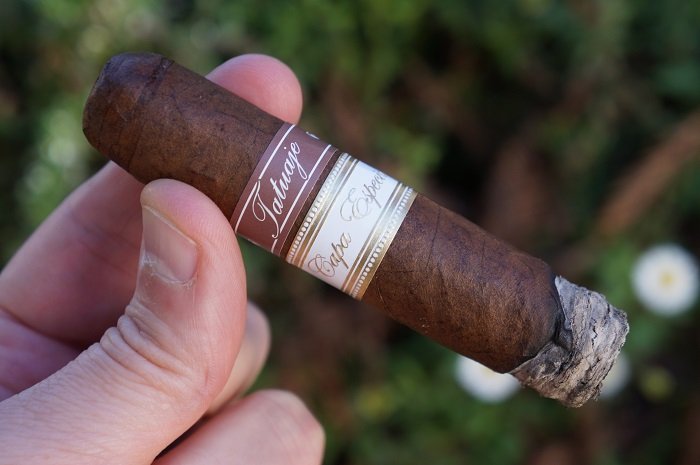 Aaron: As the second third begins, the baking spice mellows slightly, but gains a long finish. At a half inch in, the baking spice is quite mellow and the mustiness picks up in fullness. The retrohale is now musty, toasted oak, dry earth and mild baking spice. At an inch in, the toast level increases. As the third comes to a close, the profile is musty, heavily toasted oak up front with dry earth right behind and light baking spice and chalkiness in the background. The strength remained at medium.
Seth: The second third takes a minor change in direction, and I am picking up strong oak and leather notes. I am picking up some black pepper as well, and the finish is that of coffee beans and earth. Medium-full in strength and body.
John: Bread and spicy wood take the lead here. Dry wood and mild spices establish the post draw right out of the gate. That’s it! There are no other flavor evolutions here, but the flavor combinations are engaging and enjoyable.
Jiunn: The second third continues on the path of the first third. The only minor difference is, there’s a slightly greater dry red pepper spice influence. But overall, the cigar still does a good job of hitting the major spectrums of sweet, earth and spice. Strength and body continues to be medium-full. 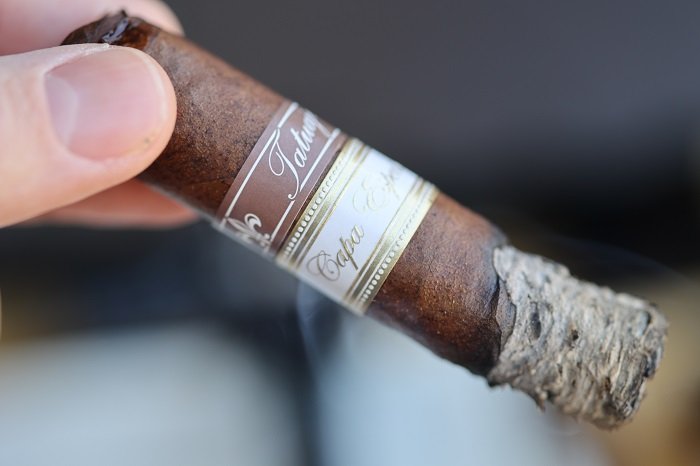 Aaron: As the final third begins, a light vegetal note joins the profile. At a half inch in, the heavy toast transitions to a light char. The retrohale is now just musty, toasted oak and dry earth. As the cigar wraps up, the char has moved back to a heavy toast and the profile is musty, heavily toasted oak up front with dry earth right behind with light amounts of baking spice, chalkiness and vegetal notes. The strength bumped up to slightly above medium.
Seth: Towards the end of the cigar, it began to heat up and lose some quality flavors. I was left with soft spice notes, leather, seasoned wood and dry earth. It was not too harsh, but the cigar was ready to be done. Medium-full in strength and body.
John: Some dryness and tannic wood to start. Baking spices move into the middle of the profile, and combine with wood into the post draw. The balance here isn’t at the same levels as the first and second thirds.
Jiunn: The final third creates a bittered cedar note. This in itself creates a less desirable flavor experience. Strength and body finishes the same medium-full. 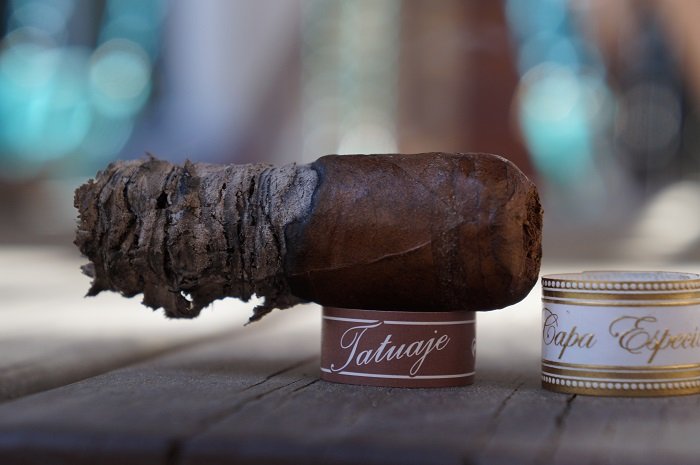 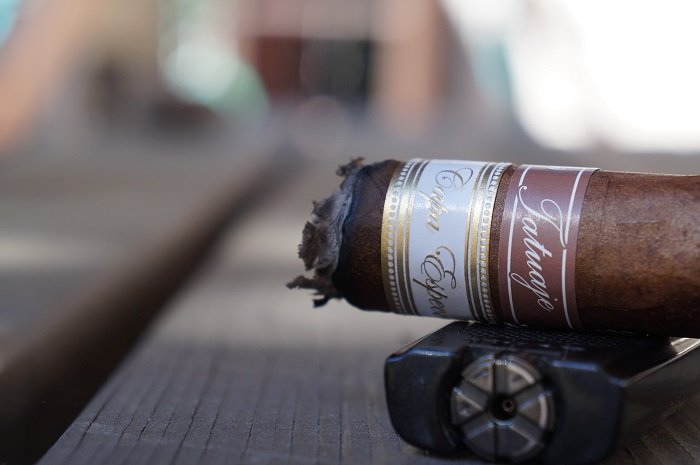 Aaron: The cigar began with lightly toasted oak, earth and some bold baking spice. Some mustiness joined fairly quickly and some chalkiness a bit later. The second third saw the toast level increase and the final third saw it transition to light char for a time and then back to a heavy toast while a vegetal note joined in. The Tatuaje Cohete Capa Especial had a nice first third and then dropped down as the flavor profile became a bit muddled and maintained that experience the rest of the way. All three cigars in the series performed pretty similarly in terms of enjoyment and I can’t point to one that I’d go to over the others, but all in all, this is still a cigar that I wouldn’t come back to all that frequently.
Seth: I was really hoping that the Tatuaje Cohete Capa Especial was going to be a homerun, but despite having an amazing start, it did not finish strong. It did not finish poorly, but it went downhill compared with the great first third. Draw and burn were great, strength and body as well, but that Sumatra quality dropped in the end. Not the best Capa Especial Pete has released, and he has had some great ones.
John: Sometimes you don’t need to write three paragraphs of flavor descriptions, and such is the case with the Tatuaje Cohete Capa Especial. Delivering interesting and engaging flavors through the first and second thirds, it was pleasant through the last third but without the same level of flavor balance. The construction and draw were perfect. The Cohete Capa Especial is tied for me with the Cohete Reserva in terms of scoring. Both cigars are reasonably priced, and a great short format. I’ll happily pick more of these up. Total smoking time was 1 hour and 10 minutes.
Jiunn: Now having the opportunity to review all three Cohetes, I can confidently say, there is not a dud in the mix. All three are worth smoking now but I believe will have high aging potential. The Tatuaje Cohete Capa Especial, specifically, is probably the best to smoke now, but I especially look forward to what it’ll smoke like in another 3 months. Winners all around.