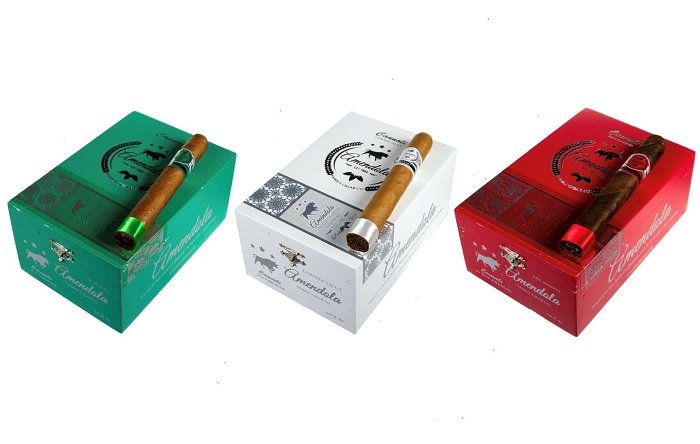 (Miami, Florida) May 24, 2021—Amendola Family Cigar Co. announces the release of the Signature Series Cannoli Green and Cannoli White cigar brands. The release of these two brands completes the Signature Cannoli Series which began with the Cannoli Red (launched in December of 2020). The combination of all three brands represents the colors of the Italian flag. The representation of the Italian flag and the name Cannoli are both nods to the Italian American heritage of Amendola Family Cigar Co.

Jeffrey Amendola and Christopher Monaco came up with the Cannoli concept based around their own lifestyle. The Cannoli brands are dessert cigars, as they pair perfectly with coffee or after drinks. Jeffrey, an experienced blender, and cigar roller created the blends along with Christopher and worked together with Erik Espinosa of La Zona Cigar Factory to manufacture the brands.

The Signature Series Cannoli Green (Sumatra) made in Nicaragua; this blend is cloaked in a beautiful light brown silky Sumatra wrapper with all Nicaraguan binder/fillers. The Green Cannoli delivers floral notes along with bread, cashews, and cedar on the front end, with nuances of pepper/spice, cinnamon, sweet tobacco, and citrus on the finish/retro. A medium takes on what the original Cannoli red blend is, the Green Cannoli is full flavor, medium to full bodied featuring subtle complexities. Offered in one vitola, a 5.5×42 corona with an MSRP of $9:00.

Signature Series Cannoli White (Ecuadorian Shade Grown Connecticut), covered in a gorgeous Ecuadorian shade grown Connecticut wrapper, the White Cannoli exudes flavor with notes of white pepper, heavy cream, buttercream, and coffee on the front end with nuances of nuts, cedar, and sweet tobacco on the finish/retro. Mild to medium in strength and body. The White Cannoli was created as the perfect coffee cigar. The Cannoli White comes in one vitola, a 5.5×42 corona, with an MSRP of $9:00.

Released in December 2020, the Signature Series Cannoli Red (Mexican San Andreas) features a Mexican San Andres wrapper with Nicaraguan binder and filler. Deep in rich flavors, the Cannoli Red delivers creamy, rich flavors with distinct chocolatey notes, earth, and graham cracker on the front end with nuances of dark roast coffee/expresso, nutmeg, barnyard, and red pepper on the finish/retro. Full in flavor, body, and strength. Available in one Vitola: Boxed Pressed Corona with an MRSP of $9.00.

Christopher Monaco Principal of Amendola Family Cigar stated: “The Cannoli Series is a special project for Jeffrey and me. We made a promise to incorporate our Italian American heritage into every blend we create.