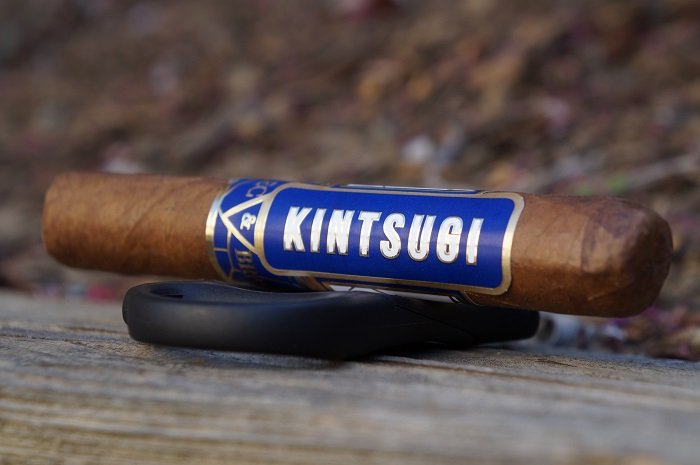 Aaron: The wrapper on the Alec & Bradley Kintsugi Robusto is light brown with some darker marbling. There is a network of fine, lightly raised veins and the seams, while smooth, are easily visible due to the color variation of the wrapper. The head is finished off with a well applied set of caps. There are two bands, with the primary carrying a color combination of blue, white and gold which designates the line name. The secondary band sits a bit under the primary and carries the brand name. The aroma from the wrapper is a light mix of wood and earth while the foot brings a fuller mix of wood and graham cracker. The pre-light draw brings musty wood with a mild spiciness on my lips.
Seth: The Alec & Bradley Kintsugi Robusto is finished with a lovely triple cap and sports a wrapper that is a true Colorado. The coloring is that of red clay. Few veins are present throughout, and those present are small. There is a nice firmness present and the wrapper is coarse in texture. In terms of aromas, I am picking up stone fruit, tobacco and earth on the foot. The wrapper is giving off notes of leather, tobacco and barnyard.
John: The Alec & Bradley Kintsugi Robusto has a large band which is composed of a larger band inset into a regular band. It’s an eye catching design to be sure. The cigar is cellophaned but lacks a UPC code. Removing the cigar from the cellophane and aromas are quite apparent, with strong raisin, grape gum, tobacco, bread, and almost a syrupy sweetness coming through for me. From the foot, I picked up on light hay, syrupy sweetness and light raisin.
Jiunn: The Alec & Bradley Kintsugi Robusto has a uniform caramel Colorado Claro wrapper shade. Veins are well pressed, seams tight, bunch and roll even and head well wrapped. Aromas from the wrapper and foot give dried sweet figs and hay. Cold draw reveals apricots, cedar and hay. 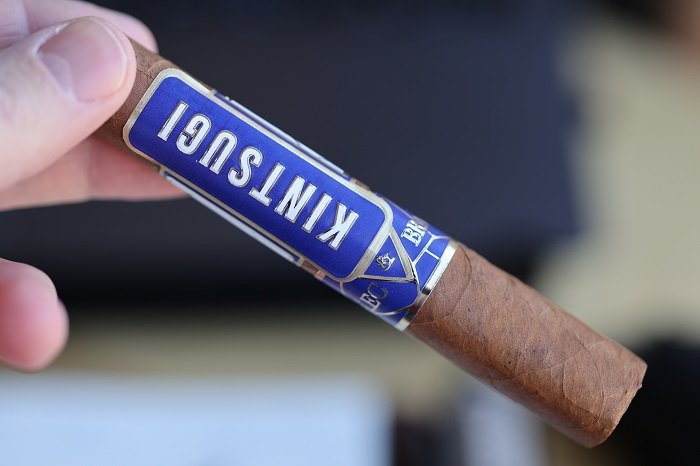 Aaron: The cigar begins with a mix of musty wood and chalkiness. At a half inch in, the chalkiness becomes very light. The retrohale is musty wood along with light chalkiness and a light floral note. As the third comes to a close, the musty wood gains a light toast as the chalkiness picks back up slightly. The strength in this third was mild-medium.
Seth: The first third begins by delivering some raisin and curry spice notes. There are some tropical fruit notes present as well, and there is this faint pineapple quality. I am picking up some ginger and cinnamon notes as well, and the finish has this brown sugar sweetness. In terms of strength and body, I would classify the cigar as a solid medium.
John: My experience started with sweetness, immediately followed by musty hay and cedar that carried into the post draw. Sweetness and light plus mustiness was present through the retrohale. A slightly sweet wood takes up the center of the profile, bringing tannic accents. As the first third progressed, the retrohale primarily took on a profile of cedar.
Jiunn: The first third’s flavors deliver a mix of cedar, hay, black tea and ripe stone fruits. Retrohaling gives minerals and creates a creamy and roasted nuttiness. The finish is fairly short with a soft cedar. Strength and body is medium. 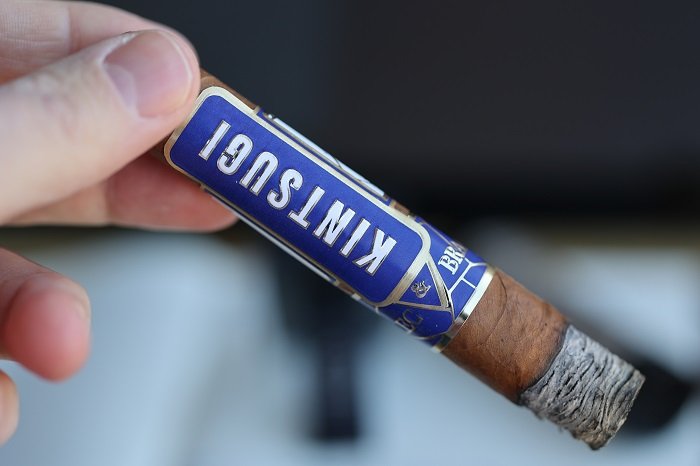 Aaron: The second third continues with the musty and lightly toasted wood up front and some light chalkiness in the background. The retrohale is musty and lightly toasted wood with a faint chalkiness. At three quarters of an inch in, the mustiness becomes very light. At an inch and a quarter, the mustiness returns to its previous level. As the third wraps up, the toast level on the wood increases a bit. The strength in this third bumped up to slightly below medium.
Seth: The second third delivers a flavor profile that revolves around this peppery lemon peel flavor, and it is accompanied by some ginger, cinnamon and lemongrass qualities. The barnyard notes are still present and there is this sharp dry earth quality on the finish. Like before, medium in strength and body.
John: Sweet wood and lingering dry wood in the post draw took the cigar into the second third. Tannins again are lingering on the palate as the second third progresses. The profile settled into a primarily sweet with musty wood combination.
Jiunn: The second third’s flavors tighten up a bit. The flavors become more distinct and cohesive, providing minerals, cedar, hay and a slightly charred over-roasted nuttiness. The finish also lengthens, giving a longer cedar finish. Strength and body remains medium. 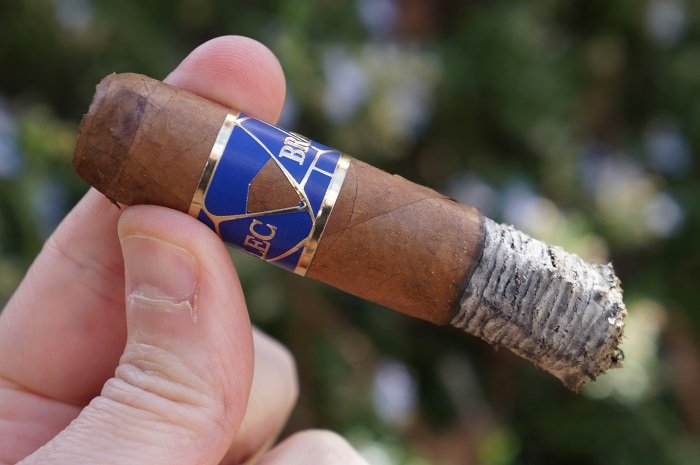 Aaron: The final third begins with the toast becoming heavier and a light black pepper joining the profile. The retrohale is musty and heavily toasted wood. At an inch in, the toast is now quite heavy as the black pepper has also picked up some. The cigar wraps up with musty and heavily toasted wood, with black pepper right behind and a faint chalkiness in the background. The strength in this third bumped up to medium.
Seth: The final third delivers some transitioning and I am picking up sweet paprika, toast, earth and wood notes. There are some faint citrus and leather notes, and the finish is that of wood and pepper. Medium to medium-full in strength and body.
John: Again, cedar and mustiness combine as the review moves into the last third. Chocolate joins the retrohale to add some complexity a few puffs in. Dry cedar and post draw cedar define the last third as it settles in. By the halfway point, hay joins at medium minus strength and manages to dominate.
Jiunn: The final third shows sharpness, with increased minerals. This causes the other flavors of cedar, hay and nuts to decrease and deteriorates the overall profile. Strength is leaning towards medium-full, while body finishes the same medium. 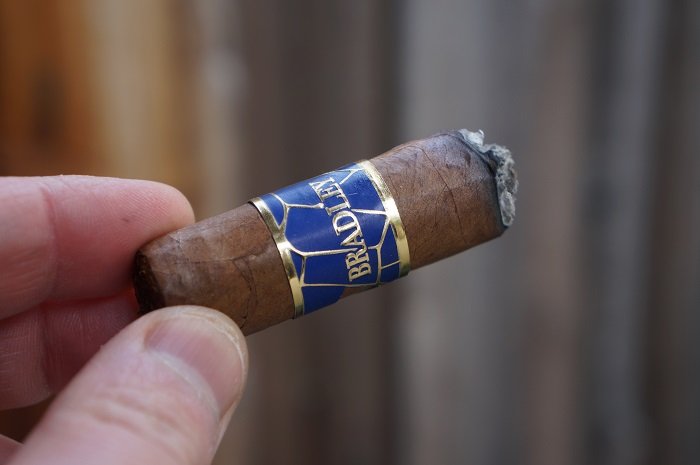 Aaron: The burn line was a bit wavy, but always self corrected. The cigar did go out once at the start of the final third, requiring a re-light. The ash held on in near inch and a half increments.
Seth: From beginning to end, the cigar smoked well and produced a great burn line. Great construction.
John: This is a well constructed cigar, with the burn being quite even and holding on a solid ash during the review.
Jiunn: Flawless burn performance. Even burn, solid ashes, cool burning temperature and ample smoke production. 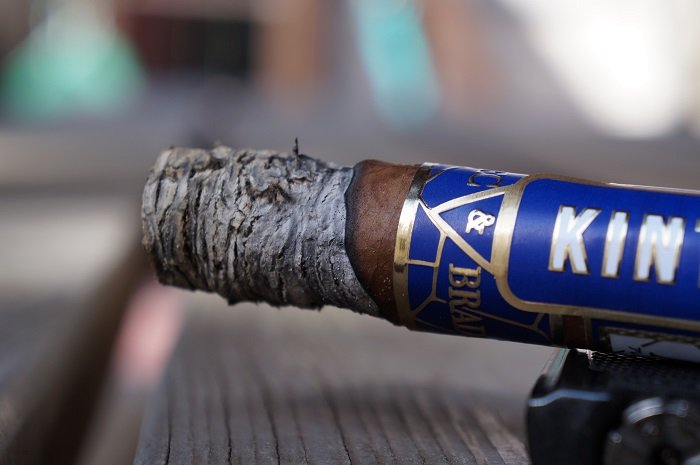 Aaron: The draw was slightly tighter than I prefer, but didn’t cause any issues with the smoking experience.
Seth: Beautiful draw from beginning to end. Perfect.
John: The draw has just a faint resistance to it, at most 1/2 to 1 notch into the resistant spectrum, putting it well into the ideal range for draw.
Jiunn: The draw was also flawless, providing the best balance of air flow and resistance.

Aaron: The flavor profile was rather pedestrian through the first two thirds as it was just musty wood with some chalkiness that later gained a toast note that increased toward the end. Some black pepper also joined in. My overall impression of the Alec & Bradley Kintsugi Robusto was that it was kind of just there, nothing about it really grabbed my attention as it was a fairly light body and strength profile until the final third when the toast and black pepper created more body and strength. Not something I really see myself returning to.
Seth: Kintsugi is a line that I believe will smoke better with a larger ring gauge. The Alec & Bradley Kintsugi Robusto delivers a profile that is superior to the Corona Gorda, and I am interested in how the Toro smokes. It is a blend that needs to feed off the filler tobacco being used, and not centered around the wrapper. With that, I believe the cigar to be young. I could be wrong on that, but I really think that come summer of 2021 these will be smoking better. The cigars are priced well and when you take that into account it is more appealing. Especially if you like Honduran offerings. I do see this blend being controversial. I think people will either get behind it or not care for it.
John: As is the case with almost every cigar I review, I try to know as little about the blend and cigar origins to keep me as objective as possible. I didn’t need to read the spec sheet to know the Alec & Bradley Kintsugi Robusto had significant amounts of Honduran tobacco in it, it was made obvious by the monotonous flavor experience as I reviewed multiple cigars. If it wasn’t made clear by my intro statement, I wouldn’t have much interest in smoking another Kintsugi Robusto if I had it available. I would much sooner reach for a Blind Faith or Gatekeeper. The burn and draw on the Kintsugi Robusto’s were flawless. Total smoking time was 1 hour and 24 minutes.
Jiunn: The Alec & Bradley Kintsugi Robusto was an overall average tasting experience. The overall feel was, there’s nothing off-putting about the cigar and technically (burn and draw), it performed well. But I wanted more than an average array of flavors of cedar, hay and nuts. I wanted fuller flavors in spice, earth and sweetness. I’ll put some in the rotation to revisit down to road.