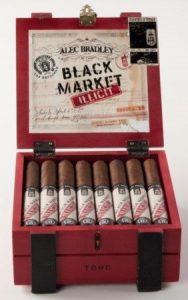 FT. Lauderdale, FL (August 16, 2017) – Cigar aficionados have been awaiting the arrival of the Black Market Illicit to TAA retailers nationwide. Its production was first announced in March during the 49th Annual Tobacconist Association of America’s Meeting in Cabo San Lucas. An iteration of the critically acclaimed Black Market line, the Illicit, a part of the TAA 2017 Exclusive Series, began shipping this week.

Black Market Illicit is a 6-inch by 50 ring Toro featuring a robust Nicaraguan wrapper leaf and flavorful Honduran and Nicaraguan dual binder wrapped around fillers from small-yield farms in Nicaragua.

“This is the first exclusive series cigar Alec Bradley has developed for TAA retailers since we introduced the Prensado Figurado in 2013,” said Alan Rubin, owner of Alec Bradley Cigar Company. “We like to describe this iteration of our number one- selling cigar as Black Market ‘on steroids.’ True to its name, Black Market Illicit embodies the characteristics that have earned its namesake consistent 90+ ratings among cigar enthusiasts around the world. This iteration was specially designed to cater to TAA’s exclusive network of retailers.”

MSRP for Black Market Illicit is $8.75 per cigar and it will be available in a 22-count box. The exclusive release is now being shipped to TAA retailers nationwide.