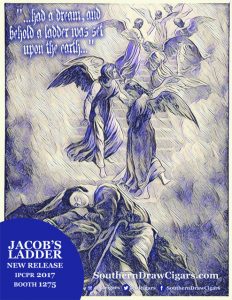 IPCPR 2017 brings with it the National Release of our Jacobs Ladder – Double Ligero, a powerful blend that was previously announced August 5, 2016 is now headed to our valued retailer partners.

What’s in the name?

Jacobs Ladder is of course staying with the theme for all Southern Draw Cigars core blends, a hardy flowering plant with robust blue and purple flowers that has been used in many ancient medicines, however the Company selected the colloquial name for the connection between heaven and earth that Jacob, son of Isaac, dreamed about in the book of Genesis 28:10 whereas he “…had a dream, and behold a ladder was set upon the earth…”.  A dream with angels ascending and descending upon the earth and a powerful story of how the Lord may indeed lead us to a place of desolation to preserve our holiness, we may need to come away from everything that pulls us away from the Lord and take a time of rest or prayer which is the case with how Southern Draw Cigars has come about.  Jacobs Ladder is also a symbolic reference to Ethan “Jacob” Holt, son of two of the Southern Draw Cigars founders, a strong, yet well balanced young man who continues to contribute by offering sales and valuable technical support for the brand he will hopefully someday, as in the case of Jacob in the Bible, inherit and be a steward of in the years ahead.

“The nationwide release will be sold on a first come, first served basis at IPCPR 2017 we can add current Southern Draw Cigars retail partners to the list if they are interested in the blend as a second production is scheduled for release in September 2017.  For those retailers who desire something special to commemorate this release, we have also produced 1,000 elegant hand-made petacas 0r cigar cases, containing (2) Toro 6×52 from the initial 2,000 cigars produced at AJ Fernandez Cigar Co., in Esteli, Nicaragua.  We have intentionally leaked only a few pictures and posts about the cigar and packaging as a teaser leading up to our annual convention.  You must visit us to enjoy and purchase this new release as we try to do our part to enhance the organization’s annual convention and the fight we are all actively involved in to protect our rights.”, stated Robert Holt, Founder and Chief Evangelist of the Company.