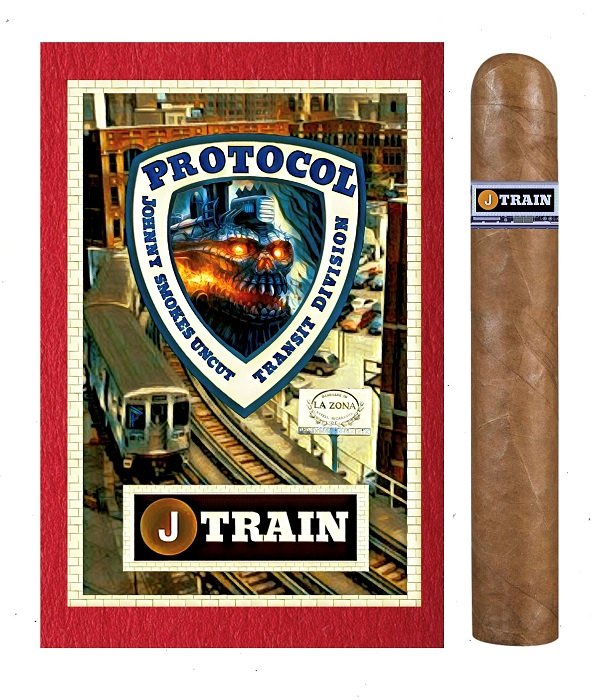 Protocol Cigars prides itself on its connection to Cigar Groups. The company feels that they are an important and vital aspect to the cigar industry, being as important as cigar manufacturers and retail stores. This latest Protocol project further perpetuates that belief once again. We are proud to announce the Protocol J Train Cigar for the Johnny Smokes Uncut Cigar Group. The J Train is not the company’s first release for cigar smoker based cigar clubs. The first was the Fat Ash. The company has released 3 renditions for the Fat Ash Cigar Group and more recently the 5 Families. The 5 Families was a collaboration with 5 popular cigar groups including Distinguished Ruffians, Fat Ash, Smokehouse Gorillas, Sheep Dog, and BOTL PA Chapter. The J Train is the newest addition to that philosophy.

Johnny Smokes Uncut Cigar Group was started by John Remer. John has been an avid cigar smoker for over 20 years. He loves cigars and his passion continues to grow with ever passing year. Johnny Smokes Uncut started May of 2020, during the high of the Covid 19 Pandemic. The Facebook Group is Johnny Smokes Uncut and the instagram page is @Johnnysmokesuncut. “I was home like everyone else and wanted to create a cigar group that was a bit different. I wanted to create something bigger than just me. I wanted to create a place where our members can become close and grow into a family through engagement. The J Train was a dream that has become a reality. I couldn’t be happier about this cigar!” said John Remer. In a very short time the group has grown into over 3,600 members, spanning over 78 countries. John goes on live from the Facebook Group several times a day and the engagement is very high. John has even started a weekly show on Whereby, where he has cigar industry personalities on to have relaxed and informative conversations with the members. John has had some cigar industry heavy hitters on his Whereby show including the likes of Carlito Fuente Jr., Nick Perdomo, Pete Johnson, Rafael Nodal, and Erik Espinosa to name just a few. “John has created something extraordinary here and we wanted to help him celebrate his accomplishments with a commemorative cigar. That is how the Protocol J Train was created.” added Kevin Keithan co-owner of Protocol Cigars.

The Protocol J Train is made at The La Zona Cigar Factory in Esteli, Nicaragua. The vitola will be a 5X50 cigar with a Nicaraguan Corojo wrapper, a Nicaraguan binder, and a Nicaraguan and Honduran combination for the filler. The cigar is a solid medium plus on the body with some sweetness, slight white pepper aroma with a creamy finish. The cigars come in a 10 count paper bundles with an MSRP of $95.00 per bundle. The J Train’s initial release will be limited to 200 bundles with the possibility of more in the future. The initial release will be on Saturday, March 13th, starting at 3pm at Caravan Cigar Company in Bath, PA. Caravan will have it at an introductory price of $89.99. The J Train will be available at the Caravan Cigar company website and in store initially, with the possibility of being available to other retailers in the future.

Juan Cancel Co-owner and founder of Protocol Cigars said the following, “Just like with any collaboration, we want to make the project feel special to those involved. We used the J Train theme because it John Remer’s nickname. To keep it with the law enforcement theme, we went with a Police Transit Patch for the packaging. We worked hand in hand with John so he felt like this was his baby! We love the way the cigar came out from the packaging to the cigar itself. We feel confident that the members of Johnny Smokes Uncut will be very please with how it all turned out.”