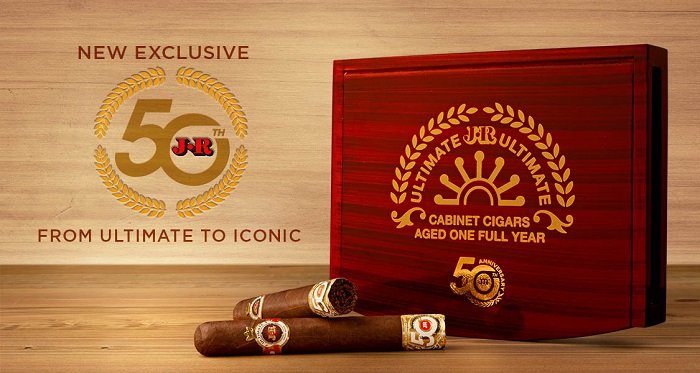 With JR Cigar marking its 50th Anniversary throughout this year, the company is teaming up with legendary blender AJ Fernandez to release an updated version of one of their oldest and most beloved house brands – and it will only be produced once for this special occasion.

The JR Ultimate 50th Anniversary is crafted to pay homage to the Ultimate line, a series of exclusive cigars dating back almost 40 years. While the original JR Ultimate’s are considered a higher-end budget line, this release updates and elevates the brand for a modern adult cigar smoker.

“The JR Ultimate’s have been a part of our history almost since the beginning,” says Davide Moro, CEO for JR Cigar. “We wanted to keep the traditional character and style of the brand, but offer a more complex and refined blend. We could think of no better person to bring this vision to life than AJ Fernandez.”

Hand crafted in Nicaragua at the famed Tabacalera AJ Fernandez cigar facility, the JR Ultimate 50th is rolled with aged Honduran and Nicaraguan fillers along with a rich San Andrés binder and a flavorful Ecuadorian Sumatra wrapper. Notes of coffee and earth are combined with hints of spice to bring adult cigar lovers that classic JR Ultimate flavor, but with a more refined profile and aroma.

Offered in a 10-count box, the JR Ultimate 50th Anniversary is available in one size: 6×54 Toro. This is a limited run cigar and will not be manufactured outside of this original release.