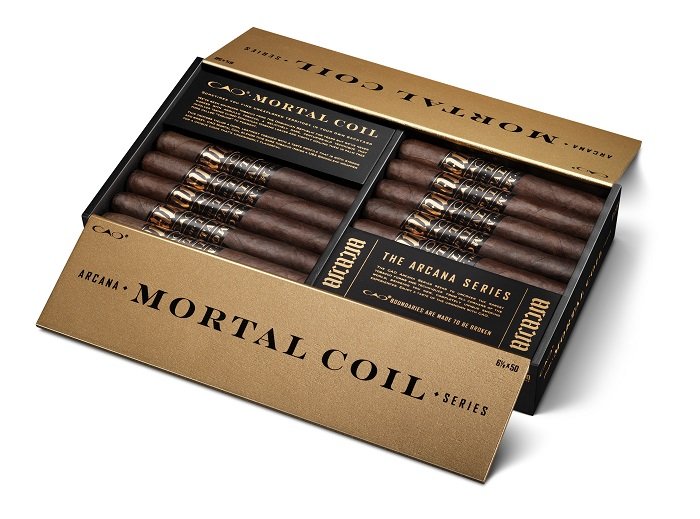 CAO is launching a new series called “Arcana” which will highlight the secrets and traditions of old-world tobacco processing methods, passed down from generation to generation to bring out the best in native tobaccos from across the globe.

The first release in the CAO Arcana series is called “Mortal Coil,” a single cigar that resurrects “Andullo,” the oldest tobacco fermentation method of the Dominican Republic.

Andullo tobacco is made following the time-honored methods of cultivation and curing sungrown Habano-seed tobaccos. Instead of traditional bulk fermentation, Andullo tobacco is wrapped tightly in handcrafted palm tree pods known as “yaguas” that are compressed with rope coiled around the pod. This old-world process of fermentation takes approximately two years and transforms the tobacco into rough, leathery-looking leaves with a characteristically thick texture and earthy sweetness.

Rick Rodriguez, CAO’s blender/ambassador said, “With the Arcana series, as we did with Amazon Basin and its Bragança leaf, we are once again shining a light on original tobacco fermentation methods to bring excitement to the fans of CAO. When it came to developing our first Arcana blend with Mortal Coil, we had the choice to go big or go home and as we always do, we decided to go big. The Andullo leaf in the blend shows the length the team and I are willing to go to deliver a unique taste experience, and it gives us a chance to show once again that CAO is a brand that stays true to its passion for tobacco.”

Wrapped in Connecticut Broadleaf, with a Connecticut Shade binder and a filler made with Dominican Andullo surrounded by Honduran Jamastran, Nicaraguan Esteli and Dominican Piloto Cubano, CAO Mortal Coil has a deep aroma that brings forth pre-light notes of sweetness and spice. The full-flavored, medium-bodied cigar opens to reveal nuttiness and a creamy, earthy sweetness.

CAO Mortal Coil is handcrafted at STG Esteli and shipped to retailers the week of February 1, 2021.