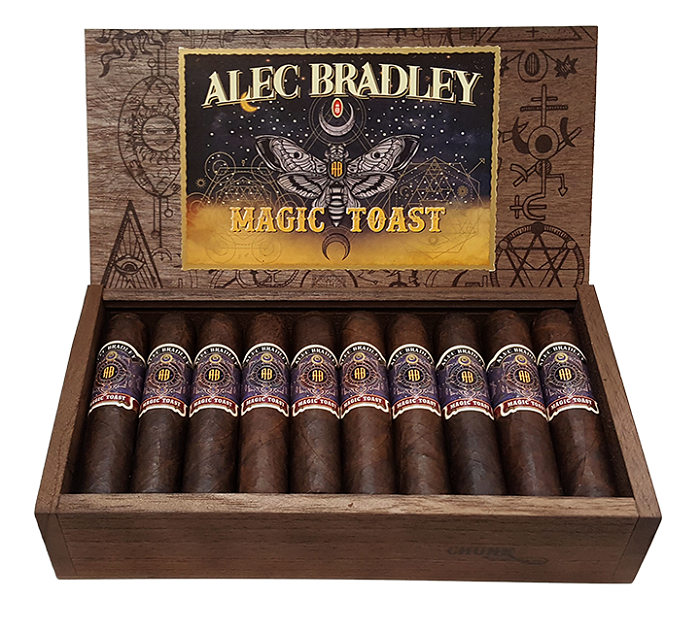 Fort Lauderdale, FL (September 19. 2019) – Alec Bradley Cigar Co. today announced that they are expanding the popular and critically acclaimed Magic Toast line of cigars. Alec Bradley will be adding a 4 ½” X 60 ring gauge cigar named the “Chunk” to the line as a permanent extension.

Alec Bradley Magic Toast was first announced as the ‘Mystery Cigar’ prior to 2018’s International Premium Cigar and Pipe Retailers (IPCPR) trade show in Las Vegas. Alec Bradley unveiled Robusto, Toro and Gordo sized cigars of Magic Toast as a Global Release line on the first day of the show.

The story of Magic Toast goes back to when Alec Bradley founder, Alan Rubin, was taken to a new tobacco field immediately after arriving to Central America. At dusk, with help from pickup truck headlights, he saw the new crop and knew it was something special. A bottle of scotch was grabbed from the truck and a toast was proposed. Alan’s business partners referred to the crop as magical. Alan stuck with the concept and later named the cigars, featuring tobacco from that field, Magic Toast.

“Premium cigar enthusiasts really embraced the story of Magic Toast; after that, it was a must-try” said Director of Sales & Marketing, Jonathan Lipson. “The flavor profile is exquisite and the cigars are an unbelievable value. Adding a short 60 ring gauge cigar to the line will help expose more enthusiasts to Magic Toast and Alec Bradley as a whole.”

Magic Toast features filler tobaccos from Honduras and Nicaragua; a double binder, one Nicaraguan and one Honduran; and a silky smooth dark natural wrapper from Honduras. Magic Toast Chunk is being rolled at the Raices Cubanas Factory in Danli, Honduras. There will be a limited amount of boxes shipping to US tobacconists in October, with a global release to follow in November. Magic Toast Chunk is being presented in a 20 count box and will retail in the US, before any applicable taxes, for $9.25 per cigar.