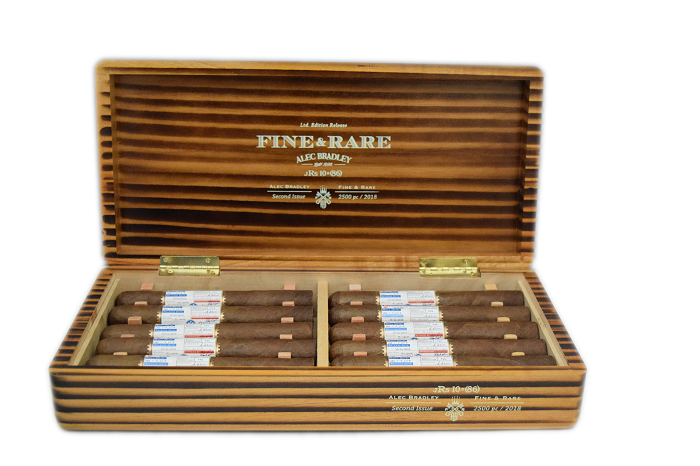 Ft. Lauderdale, FL (10/19/2018 ) – Seven years ago, founder of Alec Bradley Cigar Co., Alan Rubin had a vision to make the most complex cigar the world has ever seen. The term ‘complexity’ in cigars typically describes flavor, but Rubin wanted it to also describe the intricacies and complications of blending a cigar that would be named “Fine & Rare”.

Alec Bradley Cigars is not a company that has ever shied away from innovation. As Rubin blended, he devised the first ever triangular pressed cigar, known as the Alec Bradley Trilogy. Another revolution was the big ring gauge line known as the Alec Bradley MAXX- at its introduction, all sizes sold for the same MSRP. But Fine & Rare was to be Rubin’s Bohemian Rhapsody! Unheard of in blending, Rubin went on to take 10 different tobaccos to create the first Fine & Rare blend- released to great fanfare and critical acclaim in 2011.

Since then, enthusiasts await the announcement of the annual Limited Edition release. 2018 sees the second release of Fine & Rare JRS10 = (86), a 6 ½” X 56 Ring Gauge Parejo.

“Fine & Rare is an ever evolving project,” Rubin said. “It is a concept more than a cigar. Fine & Rare has been a Double Figurado, it has been a Torpedo and a Parejo. From iteration to iteration we play with different tobaccos and different crop years to create a 10 leaf masterpiece. Having learned early on in my career that you must listen to the tobacco and let it tell you when it’s ready; I always need to allow the combination of select leaves to dictate the size of Fine & Rare in any given year. For 2018 the only thing I heard was: ‘JRS10 = (86) Gran Toro’. The tobaccos have married incredibly. The blend is where it needs to be. I am very excited for this release!”

Officially releasing on October 24- the production of Fine & Rare JRS10 = (86) is only entrusted to a single duet of master rollers, because of the precision necessary to construct this blend. The 6 ½” X 56 Ring Gauge Gran Toro features a silky smooth estate grown wrapper from Trojes, draped over select and proprietary tobaccos from Nicaragua and Honduras. Only 2500 ten-count boxes were produced for global distribution and are exclusive to Appointed Tobacconists. US SRP has been set at $21.90 per cigar before any applicable taxes.

“Fine & Rare is for enthusiasts to experience and enjoy,” Rubin continued, “the blend is well balanced and showcases the different levels of flavor that every leaf in the cigar offers. With the holidays fast approaching, Fine & Rare is something special that can be shared with friends and family to take enjoyment to the next level!”

Rubin added, “Or to find that special moment for yourself to escape…”