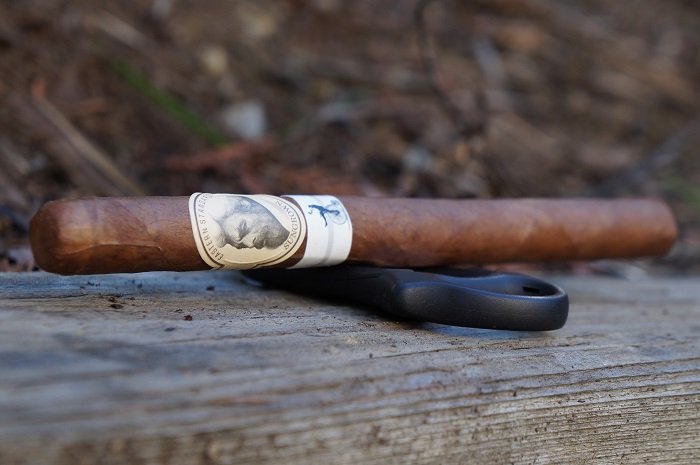 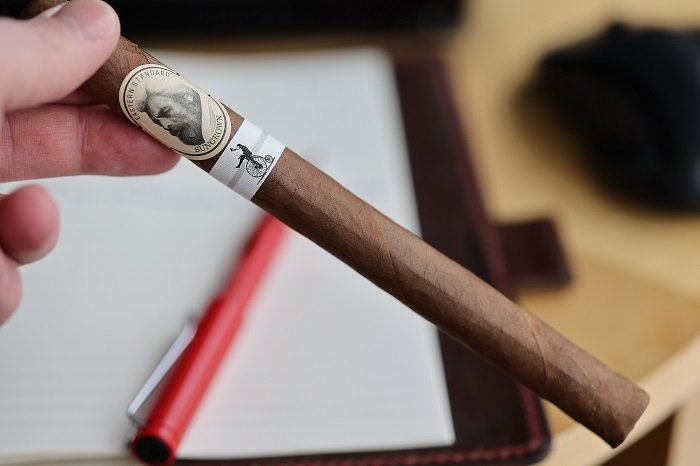 Aaron: The cigar begins with a mix of raw cedar, baking spice and mustiness. At a half inch in, the cedar is no longer raw, the baking spice has morphed into black pepper and some earth has joined the profile. The retrohale is slightly musty cedar and a big blast of black pepper. At an inch and a half, the cedar and mustiness are even up front with the black pepper and earth even right behind. The black pepper has a pretty long finish. As the third comes to a close, the cedar, mustiness and earth are all even as the black pepper has lightened up. The strength in this third was right at medium.
Seth: The first third opens up with some dry earth and spice notes. I am picking up some cedar and tea as well, but it it is fairly soft. It is predominantly showing that earth and spice profile, and I would classify the cigar as being just above medium in strength and body.
John: The Eastern Standard Sungrown started with bread, cedar, nutmeg, along with other baking spices. A medium-full strength red pepper begins to finish the draw as the cigar progresses. By the halfway point ,cedar has settled into the middle of the profile. In the bottom half, mild citrus adds some nice accents to the flavor composition.
Jiunn: The first third provides an airy and relatively thin bodied smoking experience. Flavors consist of hay, sweet cedar, baking spices and synthetic cherry. Retrohaling gives all the same flavors but the cherry noticeably pops a lot more. The finish is short with cedar and hay. Strength is medium, body medium minus. 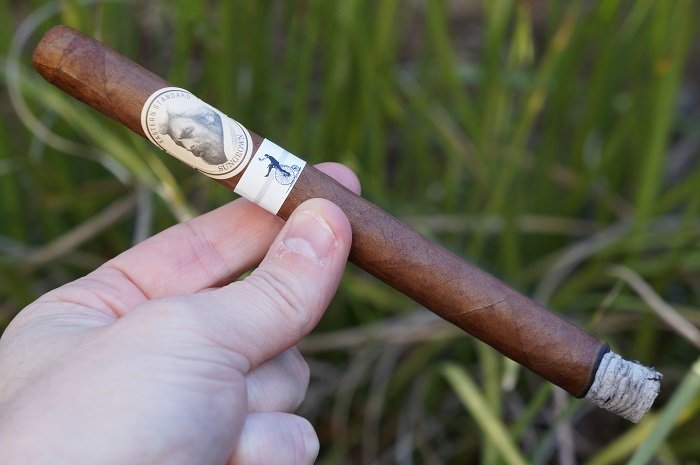 Aaron: As the second third begins, the musty cedar is up front, with the earth now right behind and the black pepper light in the background. At an inch in, the black pepper has faded away. The retrohale is musty cedar and dry earth. At an inch and a half in, all of the components have become even. The strength in this third remained at medium.
Seth: The second third delivers a slightly similar profile, but I am getting some soft lemon peel and toasted nut qualities as well. The earth, tobacco and spice notes are still present, but they are complimenting the citrus and nuts. The spice notes are slightly sweeter in this third, and there are some barnyard qualities on the finish. Medium in strength and body.
John: The initial flavor impressions in the second third were citrus, bread, baking spices, with red pepper flake finishing the draw. Approaching the halfway point, dry cedar comes through in the middle of the profile. Sour citrus joins the list of flavors, at medium strength, in the bottom half of the second third.
Jiunn: The second third changes up the profile quite a bit. First, the body picks up to a consistent medium (strength still medium). Second, the flavor profile morphs into more baking spices. These notes are combined with a staleness in slightly bitter dry nuts and hay. 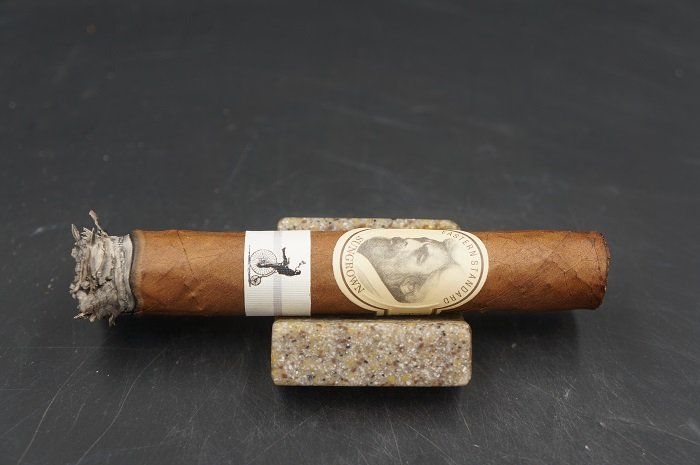 Aaron: The final third continues on with the even mix of musty cedar and dry earth. At an inch in, the cedar gains some toast. The retrohale is toasted and musty cedar along with dry earth. At an inch and three quarters in, the toast becomes pretty heavy. The strength in this third bumped up to slightly above medium.
Seth: The final third delivers a flavor profile that is much more peppery and spicier than before, and it is paired with this lovely lemon peel and earth flavor profile. There are some nutty and cedar aspects as well, and it has some tobacco, vanilla beans and leather notes on the finish. Medium-full in strength and body. Where did this come from? I love it!
John: Cocoa, baking spices and cedar carry the Eastern Standard Sungrown into the last third. There is some bite to the cedar on the tip of my tongue as it settled in. No other flavor changes through the final third.
Jiunn: The final third becomes more stale and bitter, especially on the finish. Bitter dry nuts, staleness in cedar and baking spices and hay. Strength and body finishes the same medium. 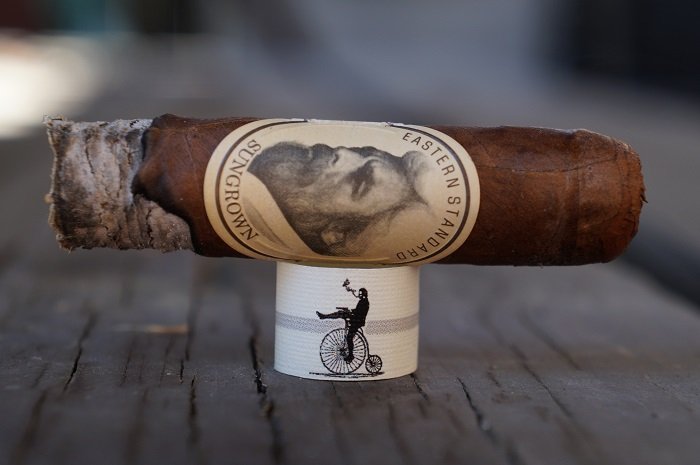 Aaron: The burn was straight the entire way, but the cigar did go out once at the end of the second third and required a re-light. The ash held on in inch and a quarter increments.
Seth: Very good burn from start to finish. Well constructed cigar.
John: The burn was very straight with up to a two inch ash. My only observation is that the secondary band had too much glue and was difficult to remove.
Jiunn: Burn performance was for the most part all good aside from very flakey and flowery ashes. It almost seemed like with every draw, some ashes fell. 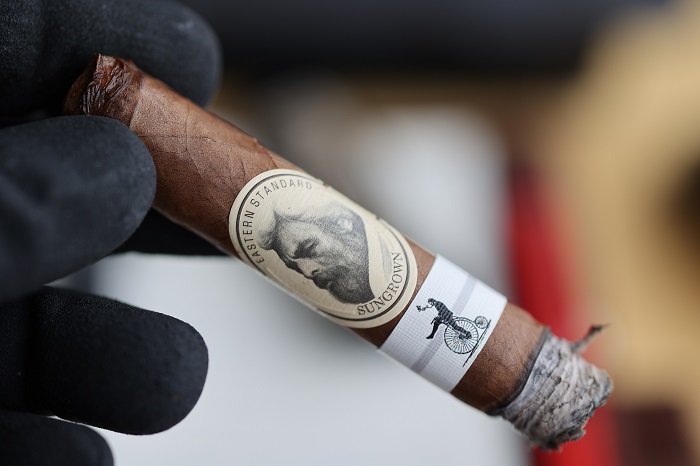 Aaron: The draw was slightly tighter than I prefer, but didn’t cause any issues with the smoking experience.
Seth: Great draw from beginning to end.
John: The draw was perfect, right in the ideal zone between resistant and open.
Jiunn: The draw on the other hand was perfect, giving the best mixture of air flow and resistance.

Aaron: The cigar had a nice start with some interesting transitions, but by the second third, settled into a basic and unexciting profile focused around cedar, mustiness and dry earth. Overall, the Caldwell Eastern Standard Sungrown Magic just became a bit monotonous through the final two thirds and lost what the first third brought to the table. I like the vitola, but just wish there was a bit more to the profile to keep my attention. I don’t really see myself revisiting this cigar.
Seth: I was really pleased with the Caldwell Eastern Standard Sungrown Magic. The complexity and transitioning throughout was fantastic, and the finish was amazing. It made up for the slow start in the first third. I will definitely be coming back to this cigar and checking out other vitolas in the line. I think this particular vitola is fantastic, and it delivers something that lovers of Lonsdales want. More Lonsdale. Loved the use of Mexican tobacco and loved that it was not an Eastern Standard blend, but a new blend.
John: The Caldwell Eastern Standard Sungrown Magic is another consistent and enjoyable cigar. Although there weren’t significant flavor changes through each third, the flavors that were presented were balanced and engaging to the palate. The burn and draw were both flawless. Although it’s described as a Lancero vitola, a 42 ring gauge at 7-1/2 inches puts it at a super Lonsdale. I would smoke these again, as this is another Caldwell release that gets moved into my smoking rotation. Total smoking time was 2 hours and 5 minutes.
Jiunn: The Caldwell Eastern Standard Sungrown Magic wasn’t very magical for me. The flavor profile showed too much bitterness and staleness in wood and spices on the latter two thirds, creating a mix that’s unpleasant. The incredibly flowery and flakey ashes didn’t help either, with ash falling on myself throughout the entire smoking time. That’s not a big deal for me, but since it was compounded by a lackluster flavor profile, it’s almost like throwing salt on the wound. I’ll pass on this release.