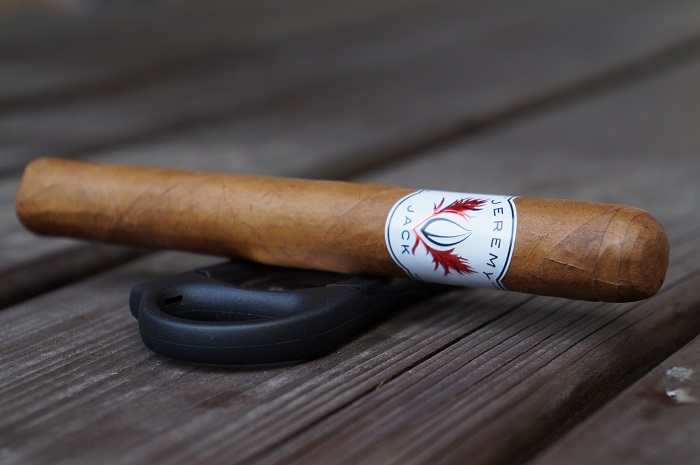 The wrapper has a nice light tan coloring and has some darker lines where the veins have been pressed. The seams are easily visible just due to how light the wrapper is and the head is finished off with a well applied triple cap. The band is very simple being all white and has the Jeremy Jack logo on it. The aroma from the wrapper has a lot of sweet hay along with a slight leather note. The foot brings leather and a lot of sweet natural tobacco bordering on pipe tobacco sweetness. The pre-light draw has a nice sweet hay note along with a medium level spicy tingle on my lips. 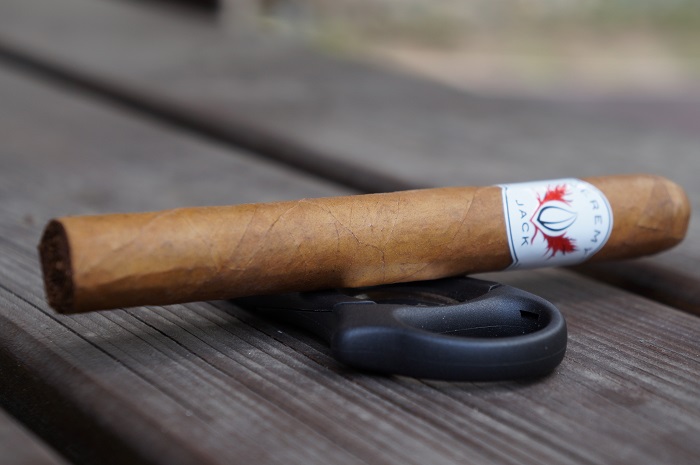 The wrapper on the JJ14 is light tan with a well applied triple cap. The band is elegant with a white back ground and metallic red horns, along with a red and black foot band. The wrapper has aromas of faint barnyard and generic wood, with light sweet hay in the foot. When removing the foot band, the glue on the wrapper caused some wrapper damage. 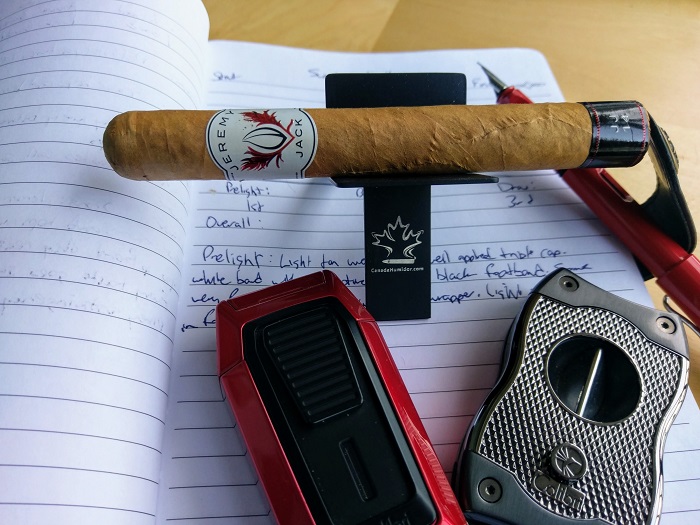 The Jeremy Jack JJ14 Corona Gorda has a Colorado Claro wrapper shade. Major veins are well pressed, seams tight but visible, even bunch and roll and head finished off with a well adhered triple cap. Aromas from the wrapper tell hay and cedar. Aromas from the foot give cedar and nuts. Cold draw gives the same results as the foot aromas. 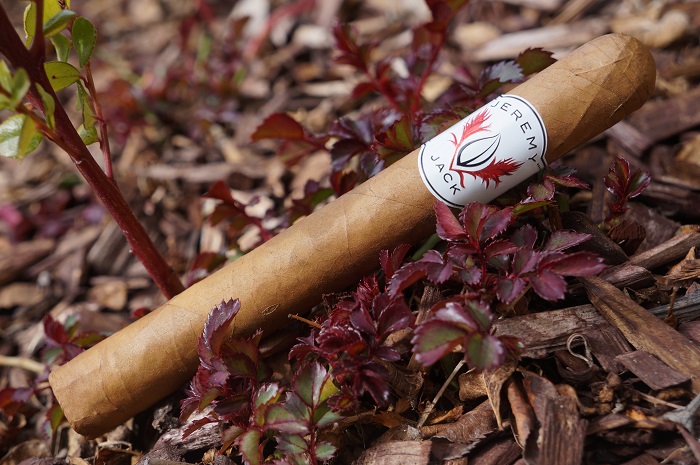 The flavor starts with some heavily toasted wood along with some potent baking spice. At a quarter inch in, the potent baking spice transitions to a potent black pepper. At a half inch in, the toast level on the wood comes down and the black pepper isn’t quite as potent. The retrohale does have a decent black pepper zing with a wood supporting note. At an inch in, a slight cream enters to smooth out the toasted wood and black pepper even more. As the third comes to a close, the toast level on the wood is very low and the pepper is paired up with the cream. The strength in this third started medium-full, but quickly moved to medium the rest of the way. 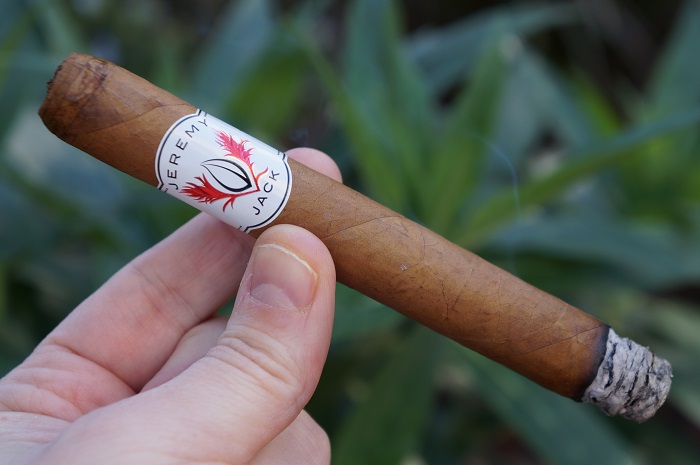 The initial draws on the JJ14 really bely the intense complexity that came afterwards. Some sweet nuttiness, finishing with a dry generic wood note. As the first third starts to settle in, the flavor profile intensifies dramatically. I start to taste intense pepper, which continues to build, along with some light post draw leather mixing in with sweetness. On the retrohale I get rich cocoa and hay, with a rich spice and pepper combination that continues to build aggressively with every draw. The lingering pepper flavor strongly reminds me of jalapeños. As quickly as it built up, the intense pepper gives way into a more nuanced and balanced lingering pepper. The cocoa on the retrohale builds into a medium strength with equal amounts of nuance and richness. By the halfway point of the first third, the flavors have all harmonized nicely, with the cocoa being the anchoring flavor and the hay, leather and little pepper as orbiting notes. 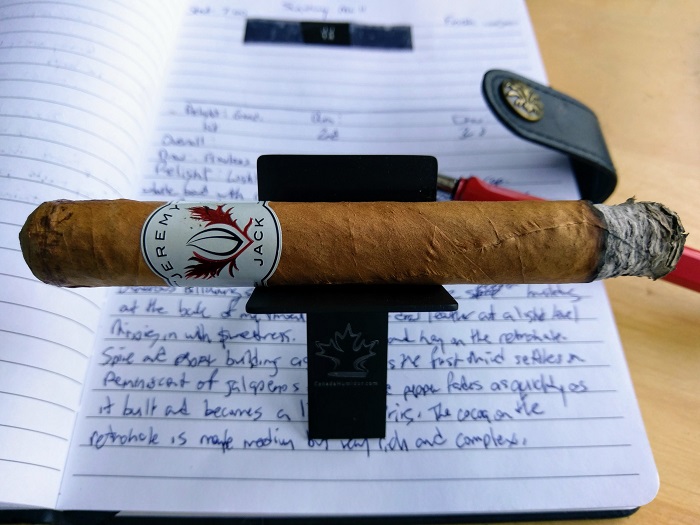 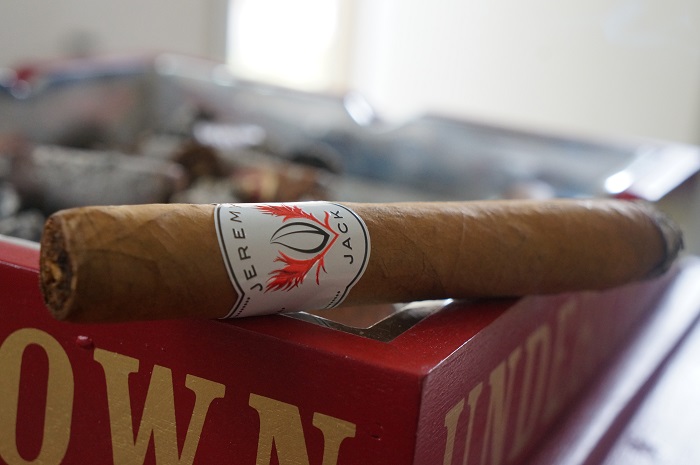 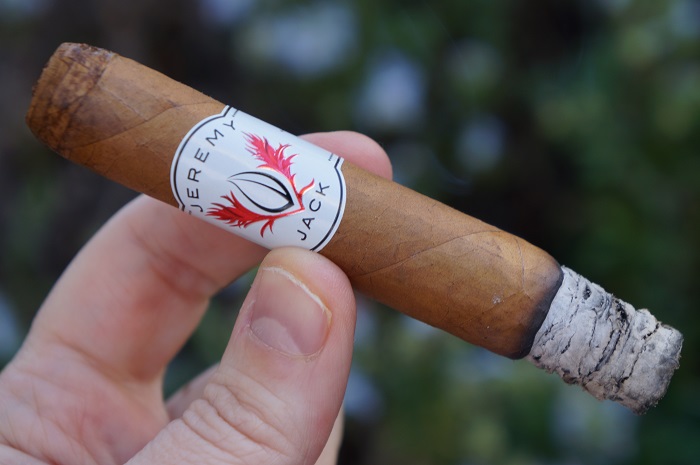 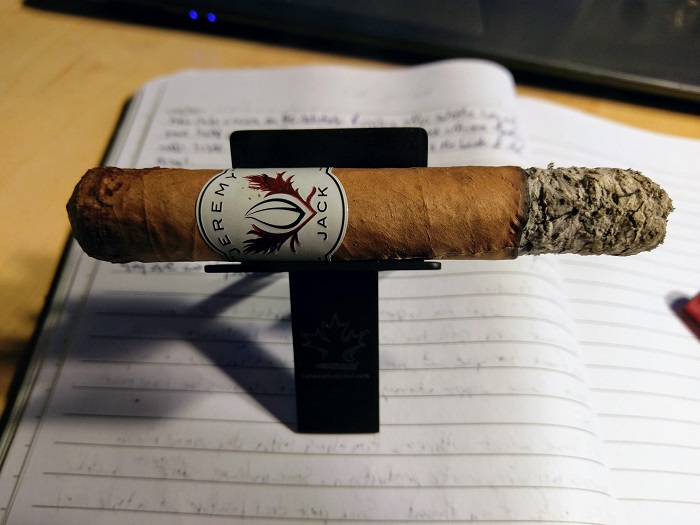 Within the second third, spice tapers off such that nuts and toasted bread are the main drivers in the flavor profile. The strength also increases, reaching for the medium plus territory (body staying medium). The finish while still very lengthy, picks up quite a bit of earthiness driven by cedar and dry earth. 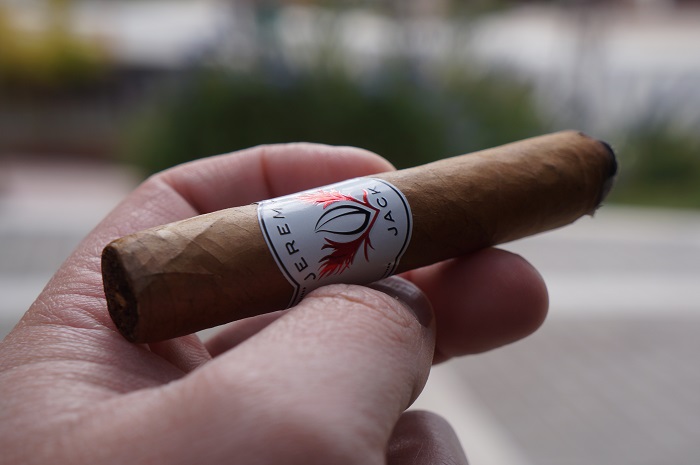 As the final third begins, some hay joins the wood up front while the dry earthiness is in the background and the cream has departed. At a quarter inch in, a slight char joins the wood. At an inch in, the charred wood is up front with the hay and earthiness in the background. The retrohale carries the wood and earthiness. At an inch and a quarter, the profile becomes a bit drying. This is how the cigar finishes out. The strength in this third remained at slightly above medium. 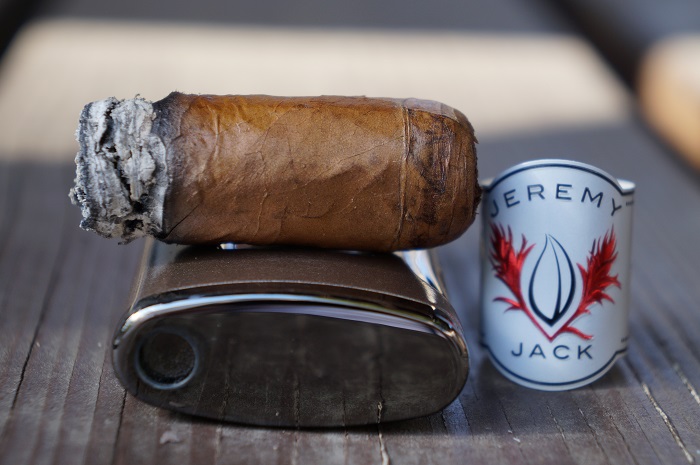 As the JJ14 transitions to the final third, the cocoa picks up intensity, bringing the post draw pepper along with it. The rich intense spices from the first third come back, although never reaching the same strength level. The hay notes from the middle third remain consistent at a medium strength level. 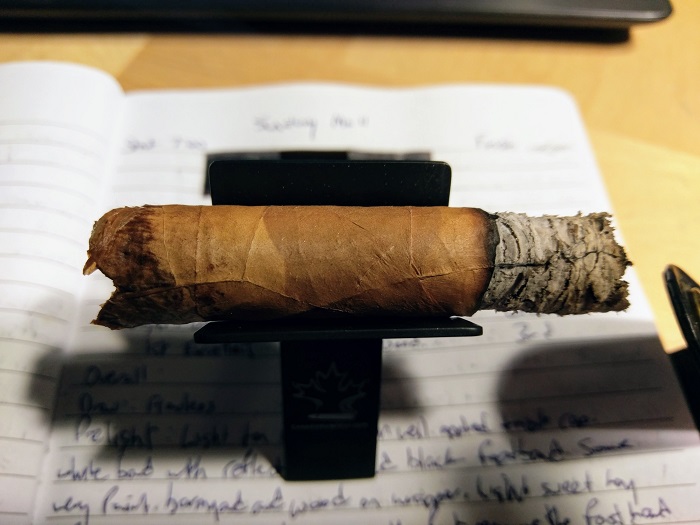 The last third shows me the cigar can use some more down time. Starting towards the middle of the final third, the cigar picks up a gradual increase in wood bitterness. The bitterness unfortunately drowns out the other flavors. Strength is still nearing medium-full and body at a consistent medium. 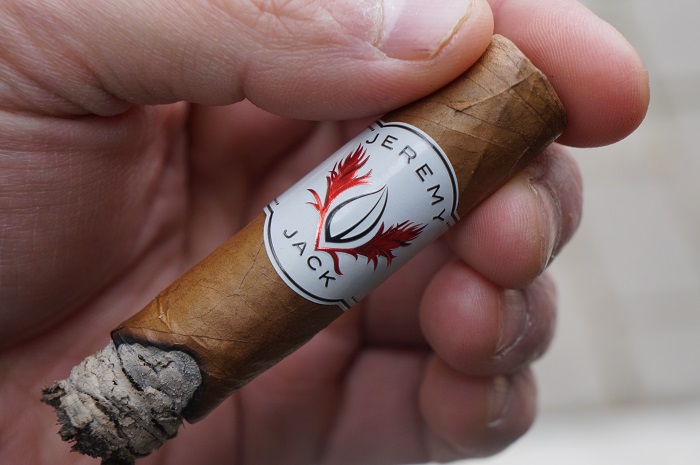 While the burn was sharp the entire way, the cigar did go out on me twice. Once in the first third and once in the final third. The ash held on in near one inch increments. 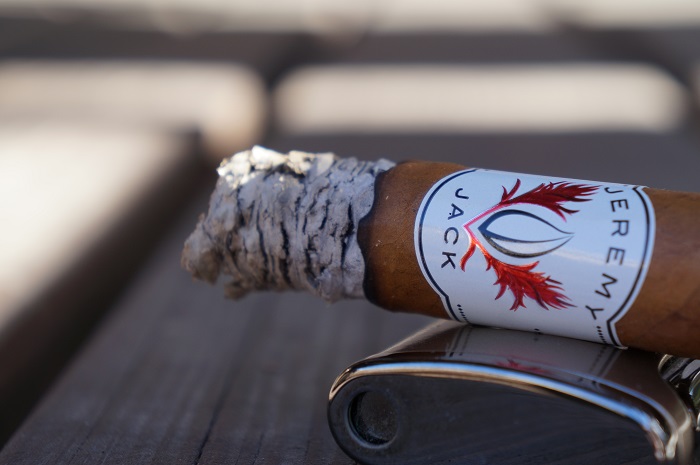 The cigar had an ideal burn throughout, with no touch-ups required. 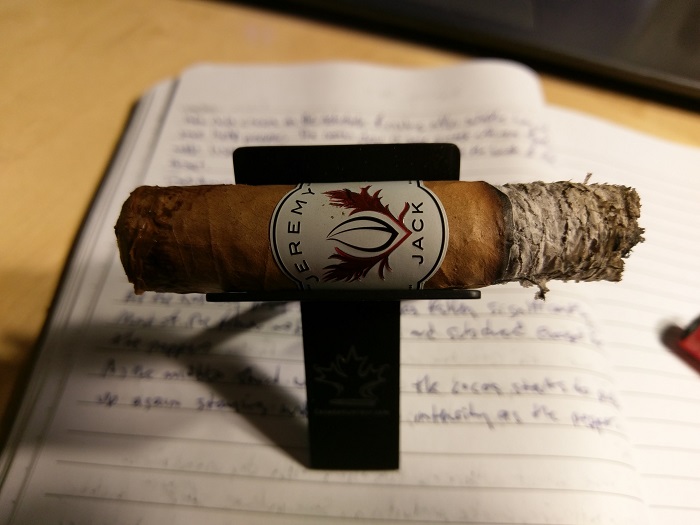 Aside from a flaky ash, the burn was great. No touch-ups or re-lights, fairly even burn and a cool burning temperature. 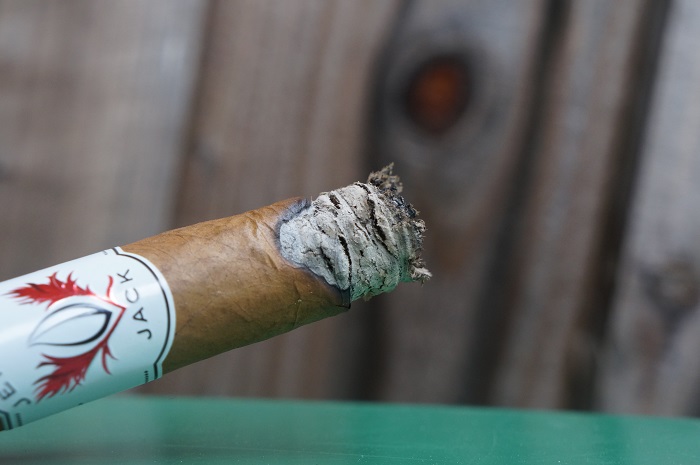 As is typical in most of the recent Connecticut shade releases, this carries more strength and spice than traditional Connecticut shades. The cigar started with a potent mix of toasted wood and baking spice which quickly transitioned to black pepper. Shortly thereafter, things settled down as some cream joined the profile. Getting into the second third and beyond, some dry earthiness joined in and the flavor profile was fairly average. Construction was good aside from a couple of re-lights. This is worthwhile to smoke, but doesn’t stand out enough amongst the really good Connecticut shades now offered. I’d definitely recommend trying one to see how they stack up for your palate and I’d have no problem smoking another one. I probably wouldn’t work too hard on tracking more down though.

The draw could only be described as flawless. This is the new benchmark by which I can compare a perfect draw.

The Jeremy Jack JJ14 shows just how far you can push the complexity of a cigar with an Ecuadorian Connecticut wrapper, without losing the essence of Connecticut flavor. The Aganorsa tobaccos blend together in a delightful combination of flavors that never seem to overpower the palate.

The ideal draw striking the best balance between airflow and resistance.

I overall enjoyed the profile of the Jeremy Jack JJ14 Corona Gorda. Starting from a heavier spice baseline transitioning into a nuttier and bread notes, the cigar was engaging and delicious within the first two thirds. The last third tells me more rest is needed but if in the future the last third can mimic the second third, the cigar will be a home run. Looking forward to visiting this cigar down the road.