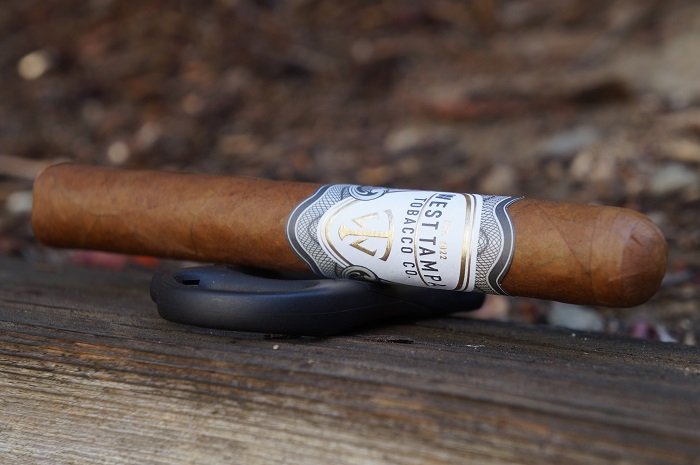 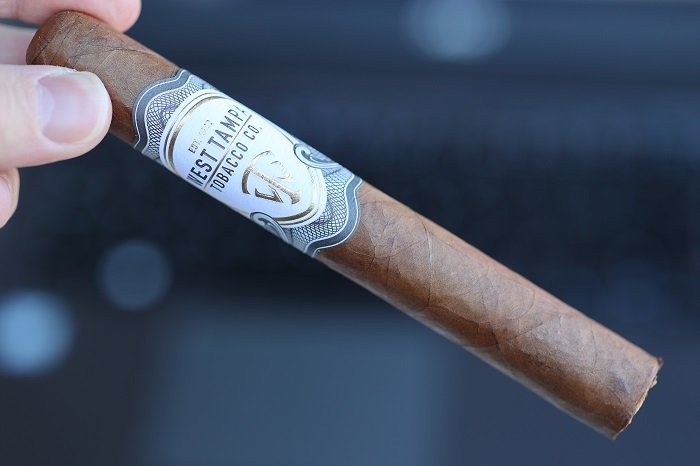 Aaron: The cigar begins with toasted cedar and light amounts of black pepper and mustiness. At a half inch in, the mustiness picks up a bit and a light carboard note joins in. The retrohale is toasted cedar and a mid-level zingy black pepper. As the third comes to a close, the toasted cedar is up front with mustiness and cardboard a bit behind and black pepper in the background. The strength was right at medium.
Seth: The first third starts out with hay and soft earth notes. Dry, not rich. There are some faint pepper spice notes as well with the cigar, and bits of leather. Medium in strength and body.
John: The cigar is a medium-full tannic wood to open, with a delayed sweet wood on the post draw. Some cardboard develops under the wood as it progresses. As the first third settles in, the medium-full tannic wood has reduced in intensity to medium, and is balanced with the cardboard, which lingers into the post draw and mixes with some nuttiness. General sweetness is present through the retrohale, and the center of the profile.
Jiunn: The first third leans to the lighter and softer side of a typical Ecuador Habano. Plenty of cedar wood and sweet bread. There is a hint of white pepper spice coming through though, but it’s most noticeable on the retrohale. The finish shows lightly toasted and stale cedar wood. Strength and body is medium. 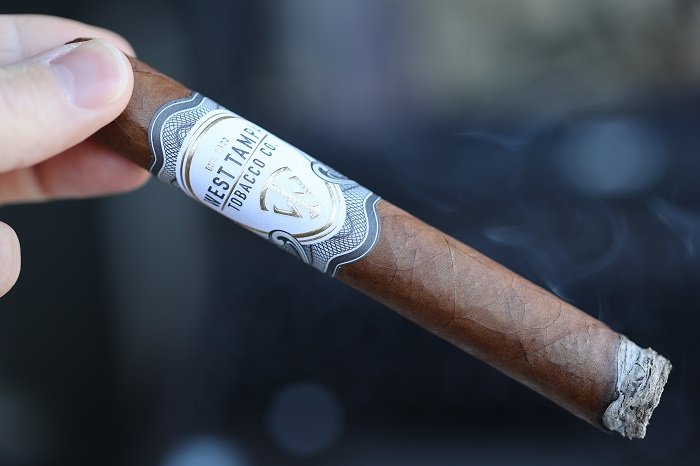 Aaron: As the second third begins, the toast level increases. At a half inch in, the carboard note gains a dampness. The retrohale is now toasted cedar with mellow amounts of black pepper and mustiness. At an inch and a half in, the mustiness is now even with the toasted cedar up front. As the third comes to a close, the profile is musty, toasted cedar up front, with damp cardboard a bit behind and black pepper in the background. The strength remained at medium.
Seth: The second third is slightly softer than the first third, but it is delivering those dry earth and wood notes. Some tobacco as well. Very little spice. Medium in strength and body.
John: Wood leads off again here with tannic accents, there is also an underlying sweetness and tannic wood through the post draw. Burning cardboard returns under the wood as it settles in. Some potting soil joins the post draw as the second third continues. After the re-light, some medium strength baking spices come through on the retrohale.
Jiunn: The staleness of the cedar wood is further amplified. This note pairs with a baking soda like effervescence, which is very odd. Aside from that, there is still a good amount of sweet bread and white pepper spice coming through. Strength and body remains medium. 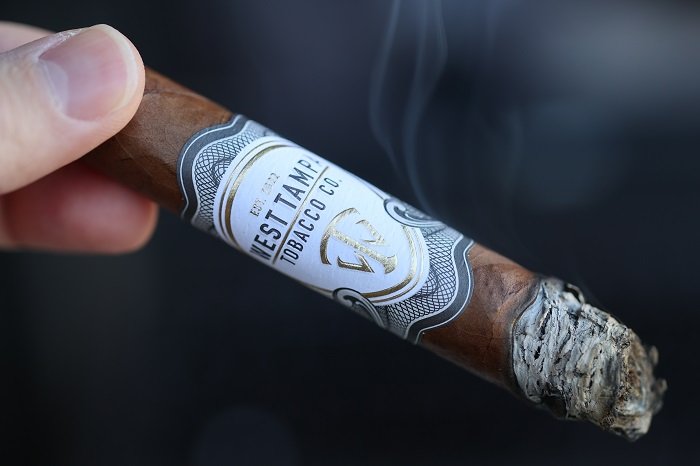 Aaron: As the final third begins, the toast level increases some more and a light bitterness joins the profile. At a half inch in, the black pepper has departed. The retrohale is now toasted cedar and mustiness. At an inch in, a light vegetal note joins the profile. At an inch and a quarter, the bitterness and vegetal notes have increased. As the cigar wraps up, the profile is musty, toasted cedar up front with cardboard, vegetal note and bitterness a bit behind. The strength bumped up to slightly above medium.
Seth: The final third offers less than the second, which was a decline from the first. No spice. Dry earth and wood notes. Medium in strength and body.
John: The last third starts with an earth and wood combination, as lingering ashy wood defines the post draw. An ashy earth dominates the profile as the last third continues. Tannic wood mingles with the ashy earth by the halfway point.
Jiunn: The final third continues to give deeper flavors of stale cedar wood and baking soda effervescence. So much so that the other flavors are now tough to find. Strength and body finish the same medium. 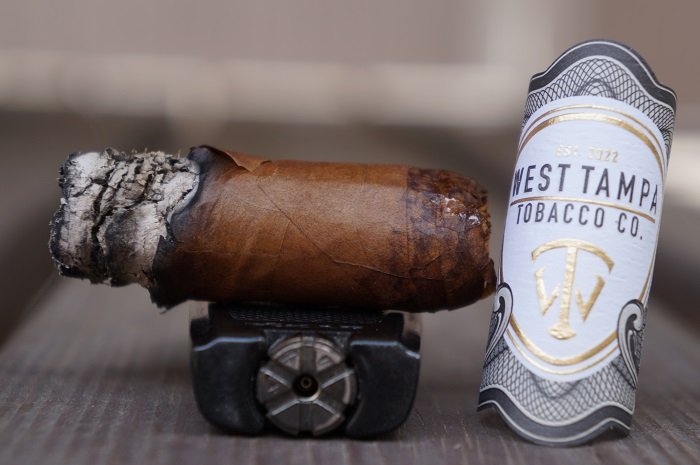 Aaron: The burn was a bit wavy through the first half and required a touch-up to keep things in line. In the second half, the cigar went out twice, requiring re-lights.
Seth: Great burn.
John: The burn was uneven to start, and a canoe developed, requiring a touch-up. The cigar was uneven again in the second third, eventually going out which required a re-light. The burn continued to struggle, eventually going out in the last third, requiring another re-light. The ash held on up to one inch increments.
Jiunn: Burn performance was flawless. Even burn, tight ashes, ample smoke production and cool burn. 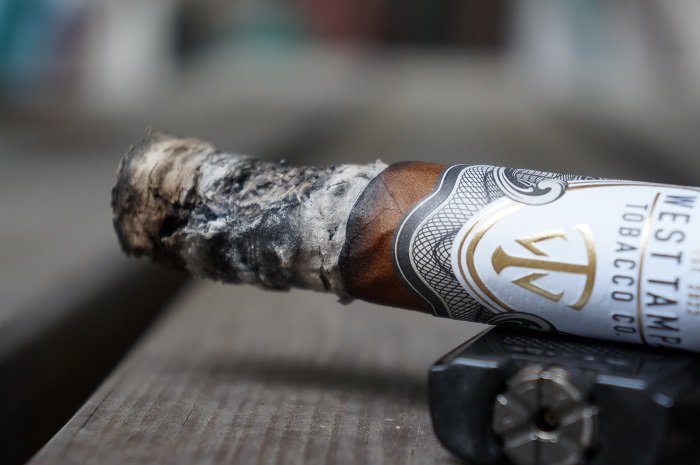 Aaron: The draw was slightly tighter than I prefer, but didn’t cause any issues with the smoking experience.
Seth: Beautiful draw.
John: The draw was initially quite resistant, almost to the point of plugged at 4-1/2 to 5 notches into the resistant spectrum. The draw opened early in the first third to 3-1/2 to 4 notches.
Jiunn: The draw was a bit tight. Even cutting to the bottom of the cap showed no relief.

Aaron: The cigar began with toasted cedar and light amounts of black pepper and mustiness. A carboard note joined a bit later. The second third saw the carboard gain a dampness. The final third saw some bitterness and a vegetal note join in while the black pepper departed. The West Tampa White Toro began with an average level of enjoyment with a fairly simple flavor profile. The enjoyment level remained at average throughout. The burn issues were a bit of a detriment to the cigar, but didn’t cause any real negative effects to the flavor profile. Not a great showing for my first try of this new brand, but we’ll see how the Black version fares in a future review.
Seth: There wasn’t much going on with the West Tampa White Toro. I was not offended by what was offered, but there wasn’t much there. Nice construction and draw. We still got West Tampa Black, and maybe one day an East Tampa White. I don’t know, I’ve got nothing.
John: I struggled to find the positives in the West Tampa White Toro. The profile was quite linear and became harsh and unbalanced in the last third. The burn struggled and the draw was initially quite resistant, opening up to an average point. I have to imagine that the burn issues impacted the flavor performance, but it was not a great first impression. This is almost certainly not something I would return to, but we have the West Tampa Black on the review schedule at some point in the future. Total smoking time was 1 hour and 57 minutes.
Jiunn: There’s really nothing to write home about when it comes to the flavor profile of this West Tampa White Toro. The mix of stale cedar wood and baking soda effervescence was odd and did not meld well. The price point is pretty awesome (especially for nowadays) at $10, but without a solid flavor profile to back it up, there’s really not much to be excited about. Pass for me.