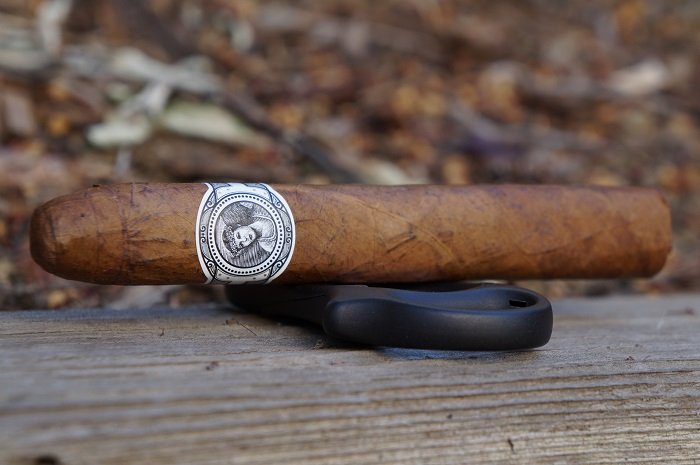 Aaron: The wrapper on the Warped Nicotina is between light and medium brown and has some dark lines and spots from the pressing of the cigar. There is a network of lightly raised veins, the seams are smooth and the 109 style head is well finished aside from a couple of raised edges. The band is white and black, has an image of a woman on the front, with the company name on one of the sides and the line name on the other in gold. The aroma from the wrapper is a mix of sweet cedar and earth. The foot brings cedar, stone fruit sweetness and a mild spiciness. The pre-light draw brings an airy, aged cedar note along with a mild spiciness on my lips.
Seth: Not an attractice wrapper. Nice 109 finish, but the Warped Nicotina has this terrible Natural to Colorado marbled coloring. It really looks like it has been sitting in the sun for about a week. Medium sized veins present throughout. Nice firmness throughout. Aromas of raisins, earth, cocoa and spices at the foot. Wrapper has leather and tobacco qualities.
John: The Warped Nicotina is cellophaned and does not have a UPC sticker. For artisanal complications, the cigar has a soft box press shape, along with a 109 style cap. Aromas from the cigar included bread, mild wood, faint hay and a distant cardboard. From the foot, I smelled sweet bread, tobacco, wood and hay.
Jiunn: The Warped Nicotina has an oily Colorado wrapper. Veins are well pressed, seams tight, bunch and roll even and head well wrapped. Aromas from the wrapper tell cedar, barnyard and flowery perfume. Aromas from the foot tell cedar and assertive white pepper spice. Cold draw reveals cedar and a little dry red pepper spice on the tip of the tongue. 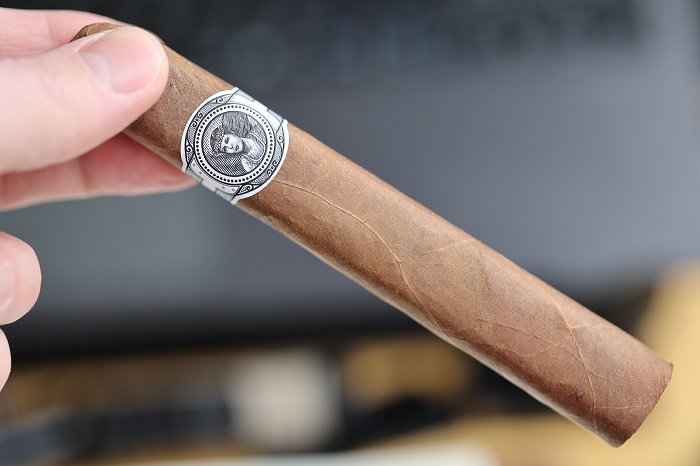 Aaron: The cigar begins with toasted cedar and baking spice. At a quarter inch in, the baking spice is pretty bold. At a half inch in, the toasted cedar gains a light mustiness and the baking spice transitions to black pepper. The retrohale is an even mix of lightly musty cedar and zingy black pepper. At an inch and a quarter, some dry earth joins the profile. The retrohale is now musty cedar, dry earth and mild black pepper. As the third comes to a close, the profile is musty, toasted cedar up front, black pepper a bit behind and dry earth a little further behind. The black pepper carries a very long finish. The strength was slightly above medium.
Seth: I love how the cigar starts. It really takes me down AGANORSA memory lane. I am picking up some barnyard qualities along with some semi-sweet damp earth notes. There are some warm spices present as well, and the finish has this espresso quality with a touch of stone fruit notes. Medium in strength and body.
John: The first third opens with sweet bread, wood and creaminess. Creamy wood takes the post draw and the profile is immediately recognizable as TABSA tobacco. Some mild vegetal notes develop on the retrohale as it settles in. I’m a bit frustrated early on as I can’t seem to get enough smoke production to pick up on the full flavor range. Some graham cracker is present on the retrohale as it moves towards the halfway point. In the bottom half, baking spices are present at medium-minus strength.
Jiunn: The first third’s flavor profile is well melded. There’s sweetness coming off bread, biscuits and roasted nuts. There’s also nice spice from dry red pepper spice, cinnamon and ginger snap cookies. Retrohaling further highlights the dry red pepper spice as well as introduces minerals. The finish consists of a long and lingering cedar and dry red pepper spice. Strength is medium-full, body is medium. 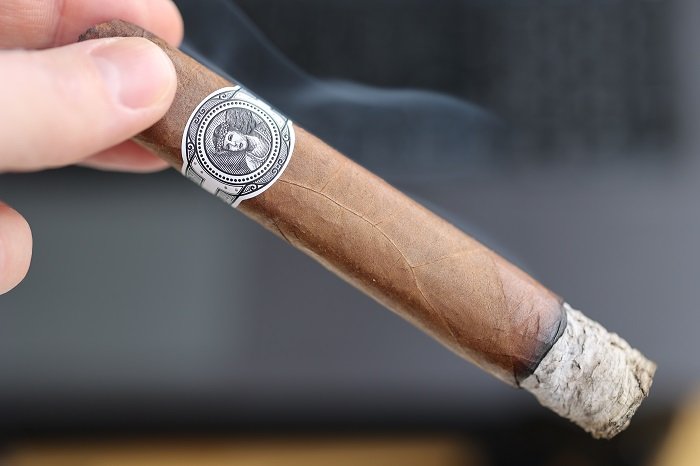 Aaron: The second third begins with the dry earth picking up in fullness. At a half inch in, the black pepper mellows. At three quarters of an inch in, the cedar gains a bit of dampness which makes the combination slightly bitter. The retrohale is an even mix of musty, toasted cedar and dry earth with mild black pepper. As the third comes to a close, the profile is musty, slightly damp cedar and dry earth even up front with black pepper and bitterness in the background. The strength remains at slightly above medium.
Seth: The second third delivers a flavor profile that is spicer than before. I am still picking up some faint earth notes, but they are dryer now. Red pepper is present with the spices, and the finish is of dry wood and coffee beans. Medium to medium-full in strength and body.
John: Light bread, wood and baking spices combine in the second third, with a mild tannic wood carrying into the post draw. Some mild earth joins at the end of the draw as it settles in. Moving towards the halfway point, earth mixes in with the wood in the center of the profile, both at light-plus strength. In the bottom half, baking spices and earth combine on the retrohale at medium strength.
Jiunn: The second third shifts the profile quite a bit. It’s now highly mineral and cedar forward, with almost no softer flavors to note. Strength and body remains medium-full and medium, respectively. 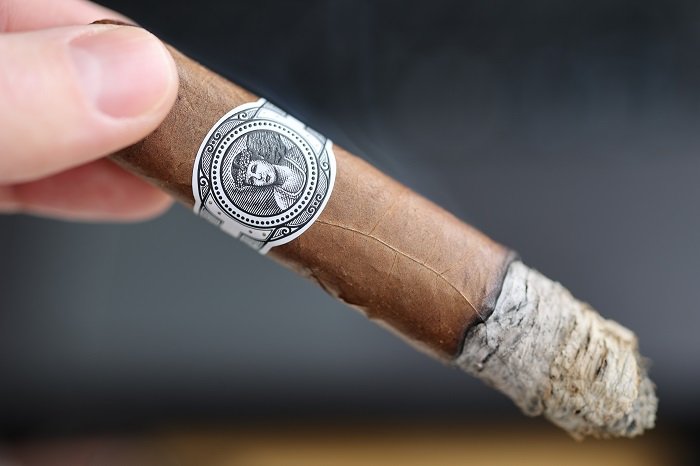 Aaron: The final third continues on with the profile from the second. The retrohale remains an even mix of musty, toasted cedar and dry earth with mild black pepper. At three quarters of an inch in, the cigar warms up and brings a vegetal note with it and increases the bitterness. The cigar wraps up with an even mix of musty, damp cedar, dry earth and vegetal note with black pepper and bitterness a bit behind. The strength bumped up to medium-full.
Seth: The final third delivers a flavor profile of dry earth, wood, grass qualities, pepper spices and espresso beans. Bits of mocha on the finish. Like before, medium to medium-full in strength and body.
John: The last third opens with bread, wood and baking spices all at medium-minus strength. Some earth and tannic wood combine through the post draw. As it progresses, earth moves to the front of the profile. Some mustiness comes through at the halfway point, sitting in the center of the draw.
Jiunn: Final third breaks away from the overtly mineral and cedar platform, bringing back some of the sweetness of bread and roasted nuts. However, it isn’t enough to change my thoughts from the second third. Strength and body finishes the same medium-full and medium. 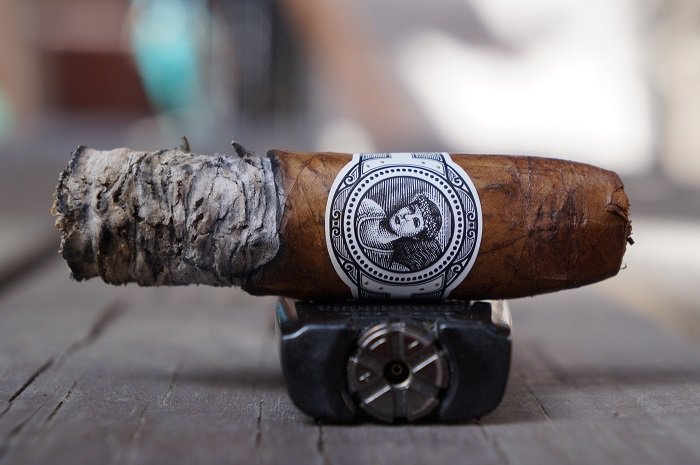 Aaron: The burn was slightly wavy throughout and the cigar went out once in the final third, requiring a re-light.
Seth: Very good burn from start to finish.
John: The burn was straight, with no intervention required. The ash had a fair amount of flakiness to it throughout the review. The ash held on well in one inch increments.
Jiunn: Aside from some minor unburnt wrapper portions, the burn performance was great. Not a real issue as I never had to pick up the lighter past the initial light. 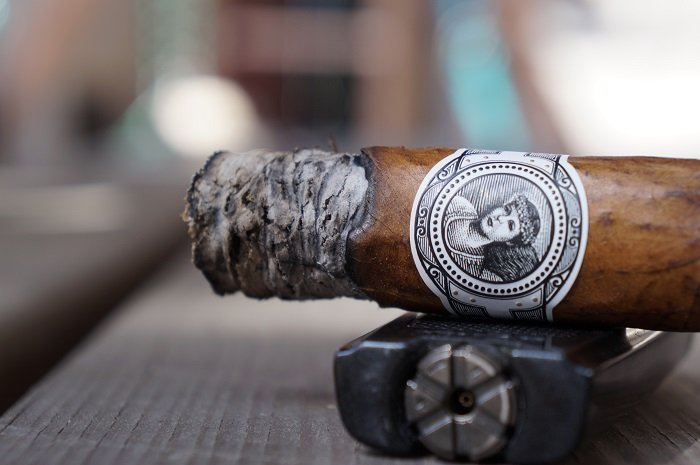 Aaron: The draw was slightly tighter than I prefer, but didn’t cause any issues with the smoking experience.
Seth: Great draw throughout.
John: The draw struggled, as the initial draw was one notch above plugged, roughly 4-1/2 – 5 notches into the resistant spectrum. The cigar felt firmly packed through the length, so it did not appear to have any knots or issues near the cap. The draw opened up to roughly 3-1/2 to 4 notches into the resistant spectrum approaching the halfway point, so I averaged the score between the two ratings.
Jiunn: The draw was flawless, giving the ideal air flow and resistance.

Aaron: The cigar began with toasted cedar and baking spice. Shortly after, some mustiness joined and the baking spice transitioned to black pepper. Some dry earth joined a bit later. The second third saw the cedar gain some dampness and a light bitterness which replaced the toasted aspect. The final third saw the cigar heat up and bring a vegetal note and increased the bitterness. Overall, the Warped Nicotina was fairly average as the flavor profile was pretty basic and a bit too pepper forward. The final third saw a drop in enjoyment as the vegetal note and increased bitterness wasn’t all that enjoyable. It was nice seeing an old brand reinvented, but the execution of the blend left something to be desired. I don’t see myself returning to this cigar.
Seth: The Warped Nicotina was an average cigar that had an enjoyable first third. If that first third continued throughout, the cigar would have done really well for me. It would have touched on some faint old-school AGANORSA qualities. This was an improvement over a lot of other AGANORSA blends of late, and at moments it showed some “Casa Fernandez qualities.” I did not get the full body experience with this cigar that was discussed in the announcement. It was not packed full of dry earth, mineral and pepper spice qualities that I have been seeing with a lot of AGANORSA blends. There was balance to the blend. I would probably smoke it again, though I am not crazy on the size. One major downside to the cigar is that it is not attractive. It is not an appealing cigar in terms of appearance, and I think that will hurt the cigar.
John: The Warped Nicotina delivered a lot of flavor combinations that Warped has been well known for in the past. While the last third didn’t live up to the same flavor complexity, it was still pleasant. The burn was perfect, but the draw was not great, with it starting out almost plugged, and then opening up to be serviceable as I smoked it. I’d like to try another example of this with a better draw, as I can’t help but feel it impacted the flavor delivery. Total smoking time was 2 hours and 3 minutes.
Jiunn: Smoking through the initial first third, I had a smile on my face. It tasted like the good old days of TABSA’s Corojo. But unfortunately, the majority of the Warped Nicotina did not hold, being overall too mineral and cedar driven. At least this cigar was far better than Kyle’s other recent releases. It’s a big step in the right direction. But it needs to take another big step.