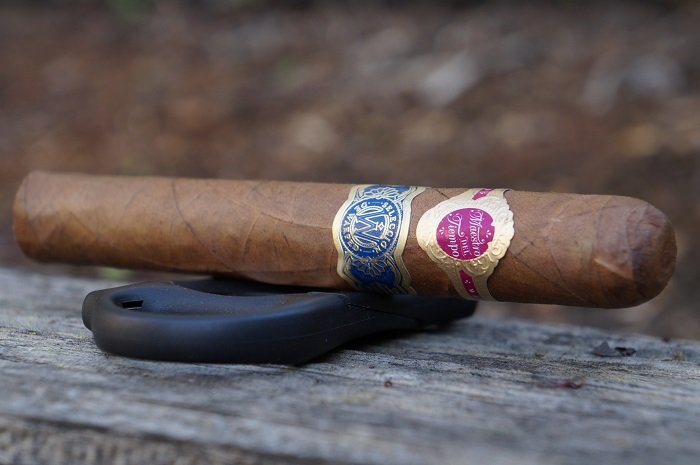 Aaron: The wrapper on the Warped Maestro Del Tiempo 6102R 2020 is light brown and has a network of veins that are slightly raised and carry a darker color to them. The seams are easily visible as they are raised and the head has a decently applied triple cap. There are two bands, with the primary being gold and purple and designating the line name while the secondary is gold and blue and designates Seleccion de Warped. The aroma from the wrapper is a faint general wood note while the foot brings a fuller wood along with some dark cherry sweetness. The pre-light draw is interesting as it’s a mix of wood and perfume, but maybe even a soapy perfume and there’s a mild spiciness on my lips.
Seth: The Warped Maestro Del Tiempo 6102R 2020 is average in appearance. The coloring on the wrapper looks faded, showing some soft areas of dark Colorado, but overall is very light Colorado almost Natural coloring. The veins are small to medium in size and they are noticeable on the rough wrapper. It is firm throughout and finished with a sloppy triple cap. Faint aromas of spice, wood and tobacco.
John: The Warped Maestro Del Tiempo 6102R 2020 is double banded, with a smooth, chocolate brown wrapper. There was no cellophane or UPC sticker for this cigar. For aromas, I was able to pick up on mild spices, clove and wood. I was not able to pick out anything else from the foot.
Jiunn: The Warped Maestro Del Tiempo 6102R 2020 wrapper isn’t the most attractive given its uneven and somewhat dull nature. Veins are well pressed, seams tight, bunch and roll even and firm and head well wrapped. Aromas from the wrapper give hay and red pepper. Aromas from the foot give white pepper and gym socks. Cold draw tells zingy red pepper spice and roasted nuts. 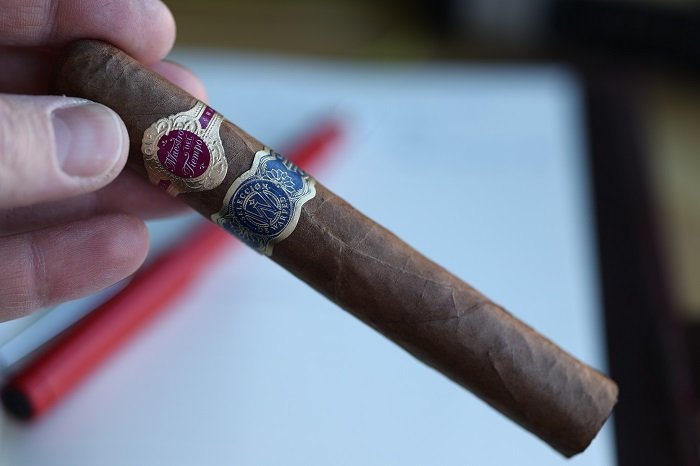 Aaron: The cigar begins with wood and a floral note. At a half inch in, some chalkiness joins the profile. At three quarters of an inch in, some mustiness along with a mild black pepper joins. The retrohale is mustiness and the floral note with a trailing black pepper zing. At an inch and a quarter, the wood gains a toasted note. As the third comes to a close, the black pepper has become very subtle as the toasted wood and mustiness are up front with the floral note just behind. The strength in this third was right at medium.
Seth: The first third begins with seasoned wood and leather notes. There are touches of coffee, and I am picking up Chinese Five Spice and plum notes. Lovely profile with some creaminess and earth on the finish. In terms of strength and body, medium to medium-full.
John: The first third on the Maestro Del Tiempo 6102R 2020 kicks off with creamy wood and baking spices on the retrohale. Light, tannic wood settles into the post draw. As the cigar progresses, chocolate joins the profile, along with some light pepper that sits on my palate between draws. A light citrus joins in through the bottom half of the first third.
Jiunn: The first third definitely has that good and familiar Aganorsa Corojo ’99 profile, but not without faults. It’s sweet bread, creamy with accented baking spices. There is a hint of sharpness and bitterness to the overall profile though, in which if it’s kept in check throughout the remaining cigar, I’ll be ok with. Retrohaling gives deeper baking spices and bread, and a hint of metallic notes. The finish carries a mixture of cedar, baking spices and bread. Strength and body is medium. 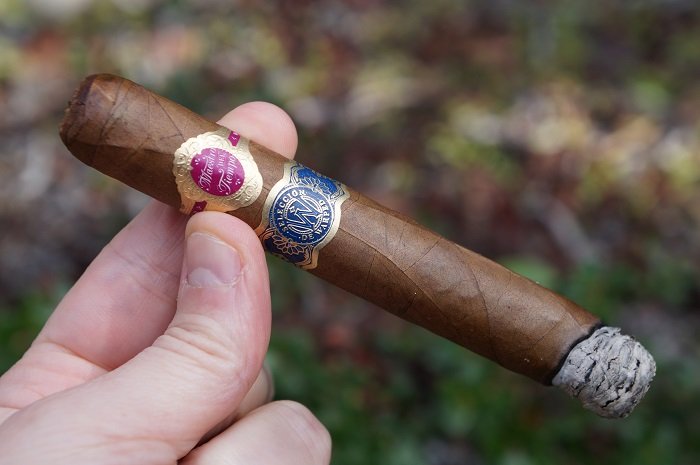 Aaron: As the second third begins, the toast level increases a bit. At a half inch in, the wood becomes a bit stale as the floral note has become quite faint. The retrohale is now just musty toasted wood. At an inch in, some dry earth joins the profile. The third wraps up with the musty, toasted wood and dry earth up front with the floral and black pepper notes faint in the background. The strength remained at medium.
Seth: The second third shows a continuation of those Chinese Five Spice notes and I am getting some cream, coffee and honey notes on top of that. There are some cedar and barnyard qualities present as well, and the finish has a nice sweet tobacco and earth quality. In terms of strength and body, the cigar is smoking around a medium-full level.
John: Flavor impressions for the start of the second third included creamy citrus, wood and graham cracker. Light chocolate with tannic cedar accents take up the middle of the profile only a few puffs in. Pepper joins the front of the draw at medium minus strength as the cigar progresses.
Jiunn: The second third’s profile becomes more tinny. This metallic note seeps through, such that the profile is less sweet, creamy and spicy. Basically, it’s taking a turn for the worse. Strength and body remains medium. 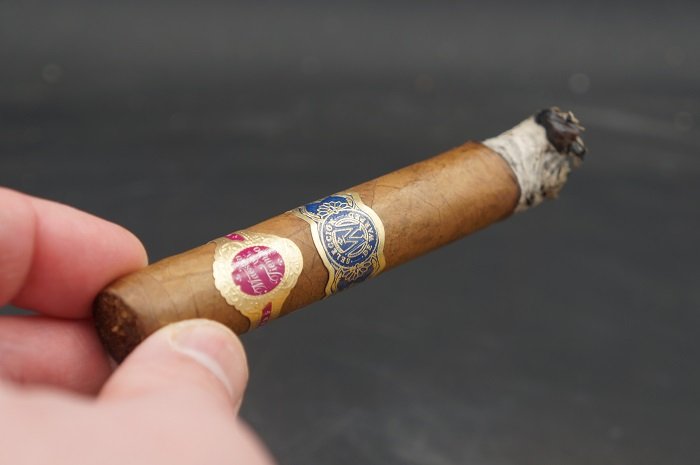 Aaron: The final third continues with how the second ended aside from the floral note being no longer detectable. At a quarter inch in, the toast level has become pretty heavy and the black pepper has picked up a bit. The retrohale is now musty toasted wood and dry earth. At three quarters of an inch in, the toast transitions to char and the black pepper is no longer present. The cigar wraps up with the musty charred wood and dry earth. The strength in this third bumped up to slightly above medium.
Seth: The finish shows a decline from the first and second thirds, but in the giant scheme of things is fairly solid. It is delivering this mineral earth profile, and it is paired with some coffee and soft spice notes. There are faint cream qualities, and it has a damp tobacco finish. Medium in strength and body.
John: Moving into the final third, I’m greeted with light plus baking spices and cedar. Graham cracker takes up the retrohale right away, with citrus in the middle of the profile immediately following. As the final third progresses, some light plus bitterness comes through at the end of each draw, mixing with the citrus.
Jiunn: The final third continues the same trend of being metallic with a sharp harshness. At this point, the sweetness and creaminess is almost entirely killed off, leaving me with a long and lingering metallic and harsh bite on the finish. Strength ramps to medium-full, while body finishes the same medium. 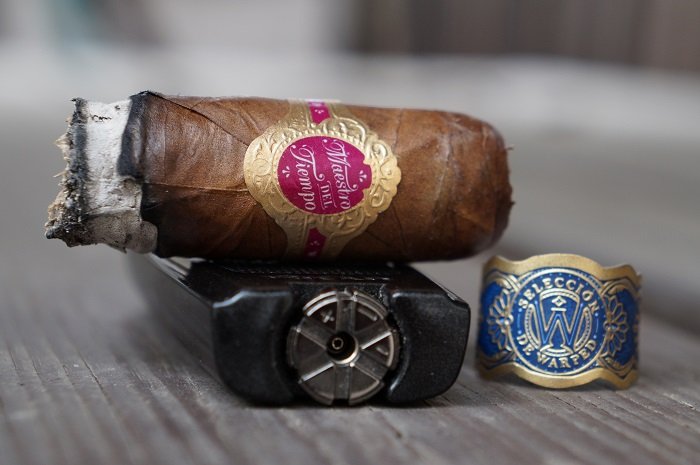 Aaron: The burn was pretty good through the first half, just having some waviness that self corrected. In the second half, the cigar went out twice, requiring a couple of re-lights.
Seth: Burn was good from beginning to end. Well constructed cigar.
John: The cigar started out with a reasonably straight burn, but became uneven as it progressed. A touch-up was required in the bottom of the first third. The burn was uneven again in the second third as part of the wrapper was not burning, necessitating a touch up. The cigar spontaneously went out nearing the end of the second third, requiring a re-light.
Jiunn: Burn performance was overall a non-issue. The only negatives were flowery ashes and minor cases of unburnt wrapper. The key thing is, I did not have to use my lighter past the initial light. 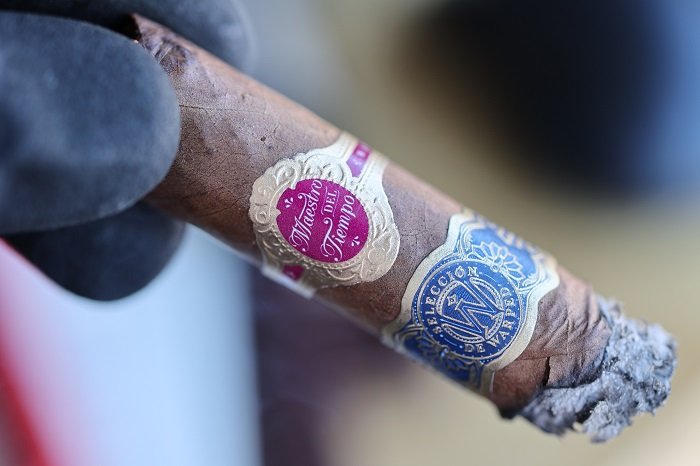 Aaron: The draw was perfect, with just the right amount of resistance that I prefer.
Seth: Nice draw from start to finish. Well constructed.
John: The draw was flawless, right in the ideal zone between resistant and open.
Jiunn: The draw was almost perfect. It was a tad snug but overall a minor issue.

Aaron: The cigar had a nice start with an enjoyable combination of flavors. In the second third, things dropped a bit as the floral and black pepper notes lightened up and the final third saw another drop as the light flavor components dropped out and the toast level increased and turned to char. I wasn’t that big of a fan of the original release while I know a lot of others loved it. This Warped Maestro Del Tiempo 6102R 2020 re-release started well, but kind of degraded as it went along, possibly due to the burn issues. I’ll just have to chalk it up that this isn’t a cigar for me, but if you were a fan of the original, it’s definitely worth your time to check this out to see if it lives up to what you remember.
Seth: The Warped Maestro Del Tiempo 6102R 2020 is a solid cigar. The first two thirds were good, but unfortunately the finish was lacking. The finish really brought the cigar down, and it’s a shame. This may be the highest scored cigar out of TABSA in about a year from me, which is good to see, but disappointing overall. This is still lacking some depth and complexity which the cigar needed to smoke at a higher level. One of the better TABSA blends I’ve had in some time, and I am surprised that it came from Warped. Not something I would go crazy over, but I am hoping that it is a sign of improvement for Warped and TABSA.
John: The Warped Maestro Del Tiempo 6102R 2020 had an enjoyable and engaging flavor composition through the first and second thirds. While the last third wasn’t as complex, it was still quite pleasant. The burn was perfect, but the burn had a number of issues requiring two touch-ups and a re-light which undoubtedly would have impacted the flavor performance. The natural comparison here is between the 2020 release and the original 2016 release. For me, I felt the original 2016 release had more complexity through the first and second thirds, and the final third was also one step better. Total smoking time was 1 hour and 56 minutes.
Jiunn: Remembering how much I loved the original release of Maestro Del Tiempo 6102R, needless to say, I was really excited to hear about the 2020 release. But just like how most movie sequels can rarely live up to the greatness of the original release, the Warped Maestro Del Tiempo 6102R 2020 is no different. Unfortunately, it was a downright disappointing release. The general feel is, it smoked too young given it’s harshness and tinny notes. I’m hoping some humidor time will help as I look forward to revisiting it down the road.