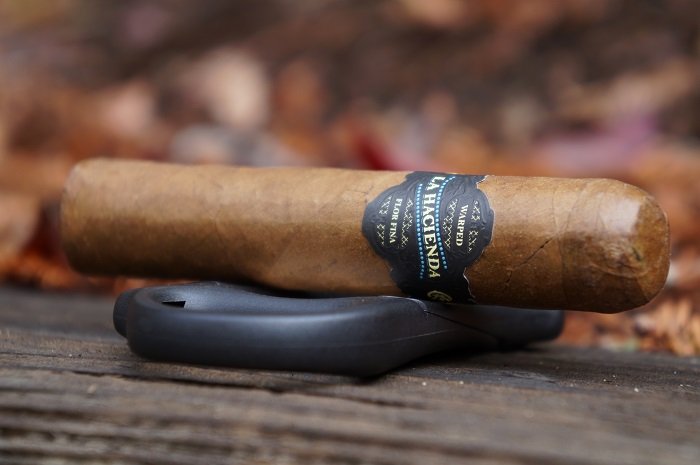 Aaron: The wrapper on the Warped La Hacienda First Growth is light brown and has a couple of decently raised veins present. The seams are smooth and the caps well applied. The band is black, yellow and blue and denotes the brand and line. The aroma from the wrapper is light hay while the foot brings a fuller, slightly green hay. The pre-light draw brings musty cedar with light spice along with a mild spice on my lips.
Seth: Smooth in texture, the Warped La Hacienda First Growth is firm in hand with small veins throughout the wrapper. The coloring is that of a classic Natural with dark brown coloring throughout. Aromas of rich earth, sweet spices and barnyard.
John: The Warped La Hacienda First Growth comes in cellophane, and has a UPC sticker that tears in half when the cellophane is opened. The cigar is single banded. The cigar felt consistently packed throughout. I was able to smell sweet bread, with light, fresh wood underneath. From the foot, I was getting sweet raisin and hay.
Jiunn: The Warped La Hacienda First Growth has a semi-oily Colorado Maduro wrapper shade. Veins are overall well pressed, seams tight, bunch and roll a bit lumpy and head is well wrapped. Aromas from the wrapper give barnyard and cedar. Aromas from the foot tell of cedar and nuts. Cold draw gives subtle cedar shavings. 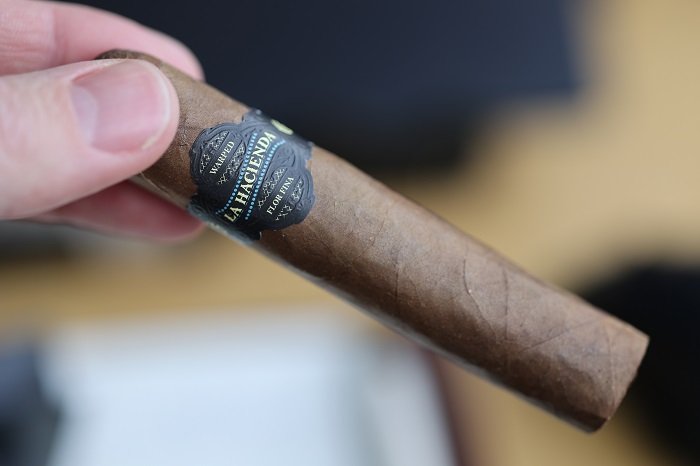 Aaron: The cigar begins with raw cedar and raw black pepper, creating an interesting combination. After a few draws, the cedar and pepper lose the rawness. At a quarter inch in, a subtle gingerbread note is present on random draws. The retrohale is toasted cedar with a black pepper zing. At three quarters of an inch in, the cedar gains a toast note and the black pepper has mellowed while that subtle gingerbread note is gone. At an inch in, some dry earth joins the profile. The strength was right at medium.
Seth: The first third begins with dry earth, cream, wood and soft pepper notes. There is this playdough quality present as well. Medium in strength and body. Unique quality with the playdough flavor, but still accomplishing mediocrity.
John: My initial flavor impressions were sweet bread and a delayed dry cedar with mild baking spices into the post draw. Chocolate joined the retrohale as the baking spices moved up to medium strength, and pushed into the center of the profile. The cigar continues to evolve, by the 5 minute mark, the baking spices are up to medium-full in strength. By the 20 minute mark, some mild citrus joins the retrohale as the baking spice intensity begins to fall back to medium strength.
Jiunn: The first third is mineral driven. The minerals are heavy on the palate, lathering the entire tongue. With the minerals come leather and a hint of that familiar Aganorsa breadiness. Retrohaling breaks away from the minerals and gives a blast of white pepper spice. Strength is medium-full and body is medium. 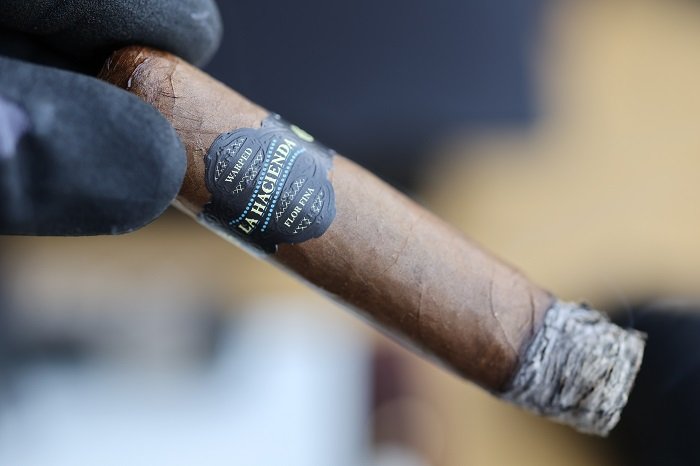 Aaron: As the second third begins, the toasted cedar is up front with dry earth and black pepper right behind and the overall profile is a bit dry. The retrohale is toasted cedar and dry earth with a black pepper zing. At three quarters of an inch in, the toasted cedar and dry earth are even while a light mustiness joins the profile. At an inch in, the toast level becomes very heavy. The strength in this third bumped up to slightly above medium.
Seth: The second third delivers that dry earth profile from the first third, and it is paired with this soft pepper and mineral quality. Like before, medium in strength and body.
John: The second third got started with a combination of bread and cedar as the chocolate has faded away. Some mild, tannic cedar carries into the post draw. As the second third settled, some earth and minerality was present. By the halfway mark, wood is lingering heavily on the palate between draws.
Jiunn: The second third continues to be sharp in minerals. I’m getting even less white notes (not that there was that much of it from the first third). Overall, flavors consist of minerals, leather and stale baking spices. Strength and body continues to be medium-full and medium, respectively. 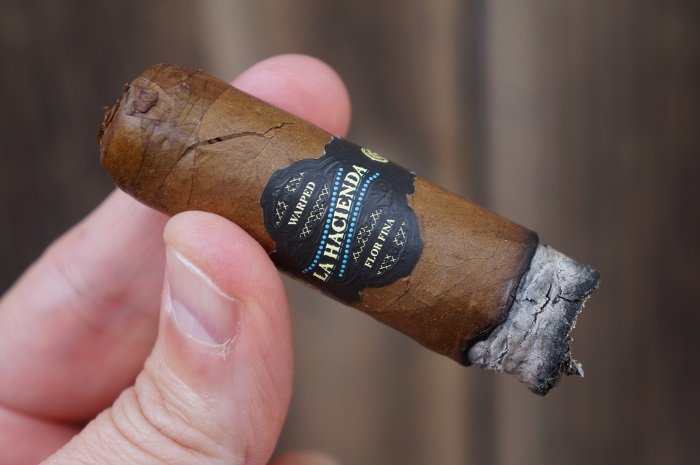 Aaron: As the final third begins, the profile is now musty, toasted cedar and dry earth up front with black pepper a bit behind. The retrohale is now musty, toasted cedar and dry earth. At a half inch in, the black pepper has faded away. The cigar finishes up with musty, toasted cedar and dry earth. The strength remained at slightly above medium.
Seth: The final third delivers that dry earth with cream and pepper notes. Bits of minerals as well, and it is right in line with the first and second third. It is also medium in strength and body.
John: The last third presented me with dry cedar and minerality. Some earthiness settled into the middle of the profile. As it progressed, the profile was focused on wood.
Jiunn: The final third tells the same story as the second third. Minerals, leather and stale baking spices is all she wrote. Strength and body finishes the same medium-full and medium. 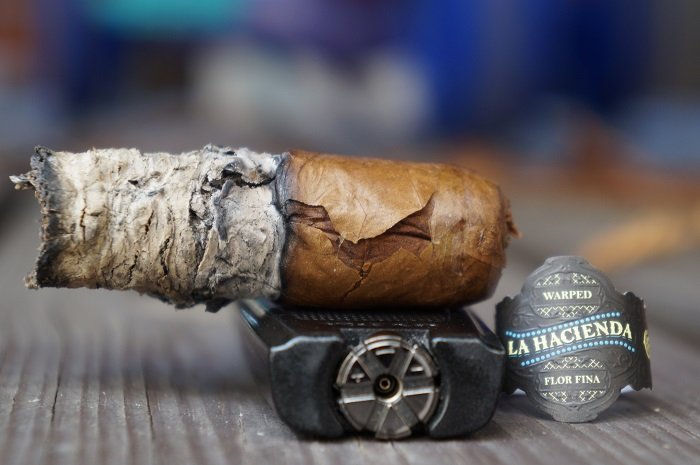 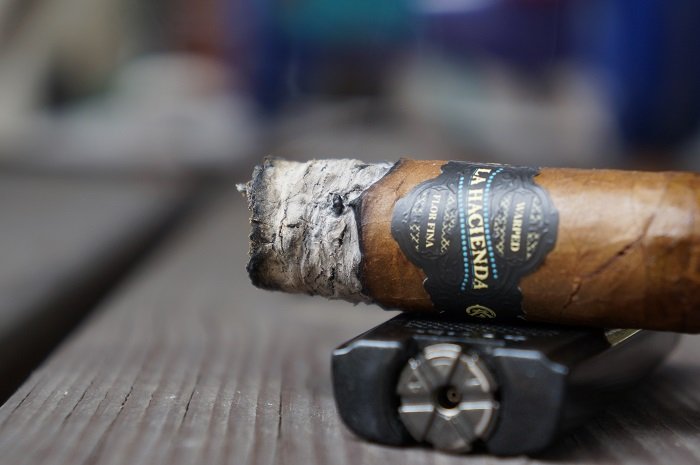 Aaron: The draw was fairly snug and a draw tool provided no relief.
Seth: Nice draw from start to finish.
John: The draw had a fair amount of resistance to it, roughly 3-1/2 to 4 notches. I would typically want a smaller cigar to have more resistance than normal, but this seemed like too much to me.
Jiunn: The draw was a bit snug but it did not hinder the flavor experience.

Aaron: The cigar began with raw cedar and raw black pepper which both settled down fairly quickly. A toast note joined the cedar and some dry earth joined in. The profile kept up this way until the final third when the black pepper dropped out. Overall, the Warped La Hacienda First Growth was pretty mundane. It was fairly dry with little transitioning. The tight draw was a bit of a downer as well. Unfortunate that this cigar didn’t provide more as the format is nice for the cooler months and the price isn’t bad, but I don’t see myself coming back to it.
Seth: It has been some time since I smoked a La Hacienda, so it is hard for me to truly compare, but if my memory is correct this has a little bit more pepper and body. Still not much though. I feel like the original La Hacienda had more sweetness. Still, I don’t think it is an improvement, and I wish the vitola was not a 50-ring gauge petit robusto. Lack of complexity and depth with the Warped La Hacienda First Growth. Medium in strength and body. It’s average. A lot better than Chinchalle though, and the best release for Kyle from 2021.
John: The Warped La Hacienda First Growth showed some interesting characteristics in the first third, combining spices, bread, cedar and chocolate. The flavor profile seemed to lose much of its complexity into the second third, becoming wood forward for most of the last half of the cigar. The burn was excellent, the draw had quite a bit of resistance to it. I wish the first third profile had carried more into the second third, I think that would have made this a cigar I would want to return to. As it is, there are other excellent Warped offerings I would rather gravitate towards. Total smoking time was 1 hour and 19 minutes.
Jiunn: I think Warped should have bypassed the first growth and went straight to the second growth. Another new Aganorsa release, another disappointment. The Warped La Hacienda First Growth had way too much minerals without the softer notes of what a good Aganorsa blend should have. How many new Aganorsa releases must it take to actually enjoy one? Terrible… 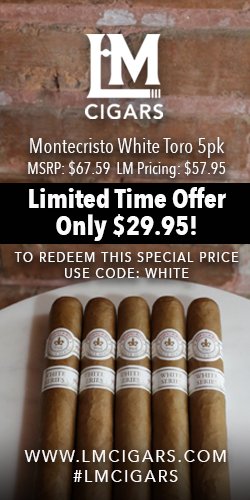