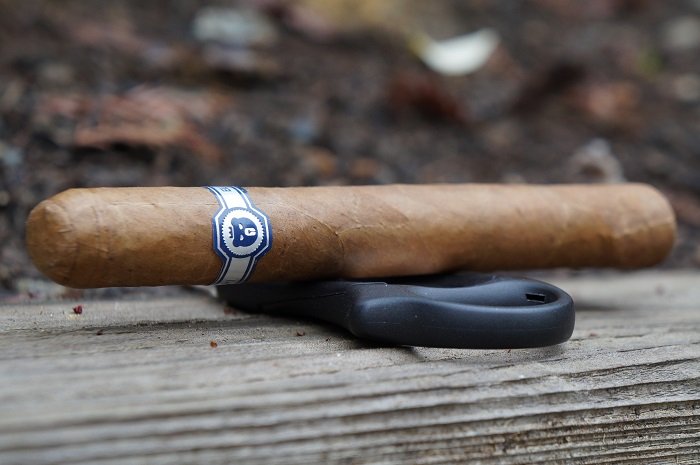 Aaron: The wrapper on the Warped El Oso Blanco Papa is light brown and has a network of raised veins that carries a slightly lighter color to them. The seams are raised and the caps are fairly well applied. The band is silver and dark blue with a bear face with a crown and denotes the line and city of manufacture on the sides. The aroma from the wrapper is a mix of wood and earth while the foot just brings a light cedar. The pre-light draw brings aged cedar, cardboard and light saltiness.
Seth: Finished with a terrific wrapper that silky in texture and beautiful in coloring, the Warped El Oso Blanco Papa has this fantastic golden-brown coloring that makes me think of summer. Natural and light Colorado coloring. It’s a beautiful wrapper. The cigar is firm throughout and finished with a great cap. Aromas of sweet spice, cedar, cream, honey and tobacco.
John: The Warped El Oso Blanco Papa does not have cellophane or a UPC code. The cigar is single banded with the silver on blue El Oso band with a bear logo. The cigar has a smooth, chocolate brown wrapper. For aromas, I was picking out mild raw bread dough, wood and hay. The foot has faint aromas of wood and hay, almost imperceptible.
Jiunn: The Warped El Oso Blanco Papa has a decent looking wrapper, giving a nice oily sheen to the overall Colorado wrapper shade. Veins are decently pressed, seams tight, bunch and roll even and head well wrapped. Aromas from the wrapper give barnyard and hay. Aromas from the foot tell the same but with added white pepper. Cold draw reveals barnyard and roasted chestnuts. 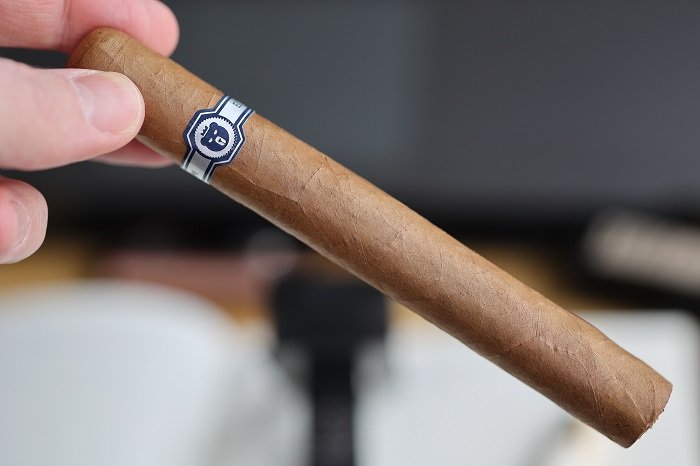 Aaron: The cigar begins with heavily toasted cedar and a bold baking spice. At a half inch in, the toast level lightens a bit as some mustiness joins the profile. The retrohale brings toasted cedar and baking spice. At an inch and a quarter, some dry earth joins the profile. The third wraps up with decently toasted cedar and baking spice up front with mustiness and dry earth a bit behind. The strength in this third was slightly above medium.
Seth: The first third has a nice beginning. I am picking up some cream and honey notes, and they are paired with some cedar and coffee. There are touches of sweet spices present, as well as some white pepper. Medium in strength and body.
John: The first third kicked things off with medium-full strength baking spices, some sweetness and a mildly dry wood to finish with spices adding an accent. There is a burning cardboard aroma that I notice right away. It’s not unpleasant, it just stood enough enough for me to identify. Some mild chocolate and cardboard move into the center of the profile as the first third settles in. Baking spices and wood recede in the strength to medium-minus as the cigar progresses. Approaching the halfway point, mild bread and sweetness are present.
Jiunn: There’s a savory and saltiness to the blend. Not quite umami but definitely quite different than most traditional cigars. With the savoriness is plenty of minerals and cedar. Retrohaling is surprisingly intense with white pepper and trailing roasted nuts. The finish is on the shorter end, with a combination of minerals and cedar. Strength is medium-full, body is medium. 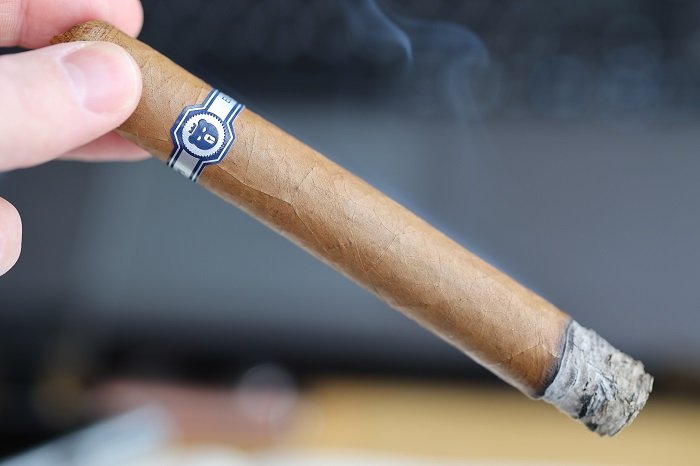 Aaron: As the second third begins, a slight bitterness comes through as part of the toast level of the cedar. At a half inch in, the toasted cedar, baking spice and dry earth are all even with the mustiness a bit behind and the bitterness departing. The retrohale is a mirror image of this profile. As the third comes to a close, the toast level becomes quite heavy and the bitterness re-emerges. The strength remains slightly above medium.
Seth: The second third delivers a profile of cedar, cream and honey. There are bits of spices and black coffee on the finish, but not what was present in the first third. Not as complex and flavorful as the first third, but still medium in strength and body.
John: The second third opened with dry wood, bread, baking spices and a medium strength dry wood on the post draw. The dry wood halves in strength after just a few puffs. As the second third progressed, wood and bread were driving the profile with light baking spices providing accents.
Jiunn: While the savoriness of the first third was unique and engaging, the second third of it becomes less engaging, especially when there is a stale nuttiness that forms. Still getting the same other notes of minerals and cedar. Strength and body is unchanged at medium-full and medium, respectively. 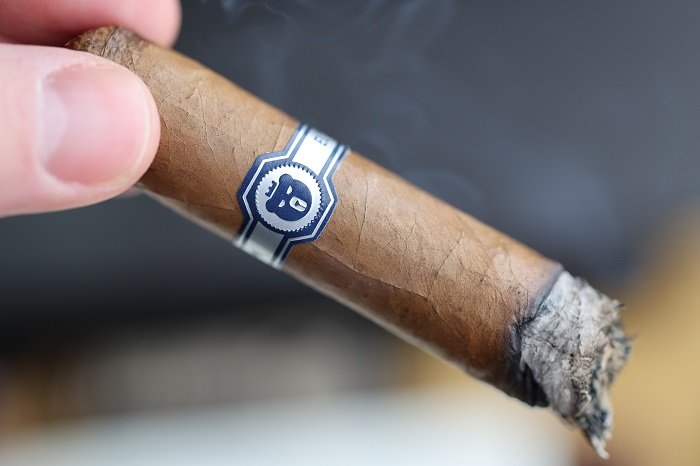 Aaron: The final third sees the toast transition to light char with the baking spice and earth even and some mustiness and light bitterness behind. At a half inch in, the char and bitterness both pick up. The retrohale is heavily toasted cedar, dry earth and mustiness. The cigar wraps up with charred cedar, baking spice and dry earth up front with mustiness and bitterness a bit behind. The strength in this third bumped up to medium-full.
Seth: The final third was lacking, and the cigar continued to show the decline from the first third. I was picking up notes of tobacco, cedar and hay. Bits of spice present as well, but little cream and coffee. Medium in strength and body.
John: Bread and dry wood lead the cigar into the last third, with light baking spices and dry wood to finish into the post draw. As the last third settled in, mild chocolate moves into the center of the profile.
Jiunn: The final third picks up sharp minerals. The minerals are pretty unpleasant, lodging to the back of my throat. The other flavors are still intact though (savory saltiness, cedar, roasted nuts). Strength and body finishes the same medium-full and medium. 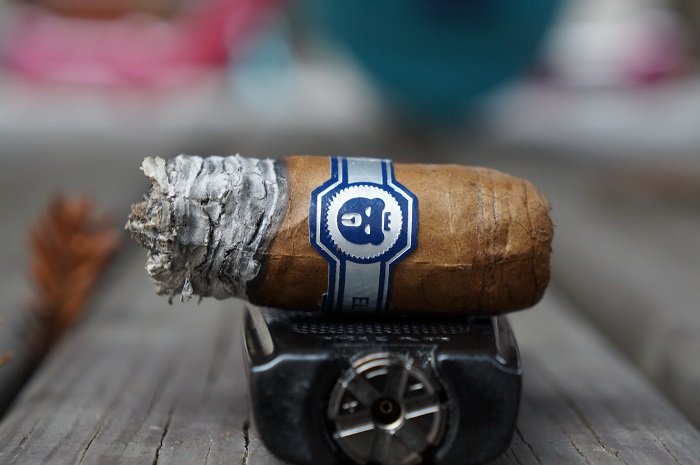 Aaron: The burn line was straight the entire way and the ash held on in inch and a half increments.
Seth: Very nice burn line and construction throughout.
John: The burn started straight, with a flaky ash observed. The burn was uneven in the second, eventually requiring a touch-up to correct. The burn was uneven in the last third, self correcting. The cigar went out in the last third, requiring a re-light.
Jiunn: Flawless burn performance. Even burn, solid ashes, cool burning temperature and good smoke production. 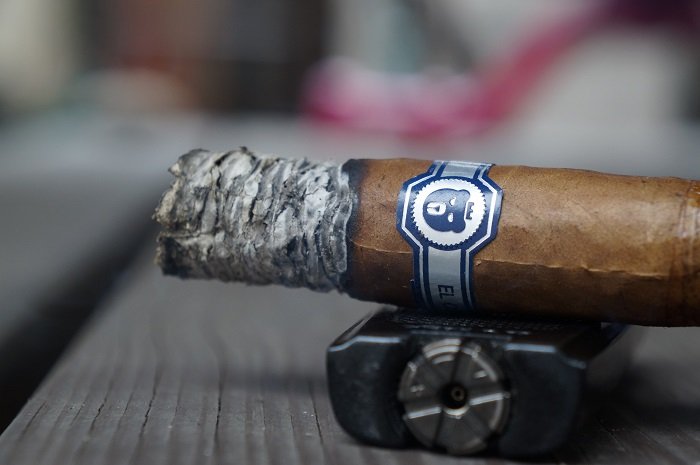 Aaron: The cigar began with heavily toasted cedar and bold baking spice. Some dry earth and mustiness joined a bit later. The final third saw the toast transition to char and built up along with some bitterness. Construction was perfect. The Warped El Oso Blanco Papa had a pretty basic flavor profile through the first two thirds and then dropped down in the final third as the char and bitterness built up. The heavy toast and char put a damper on the profile as I felt there was a good profile hiding underneath it all. The price point is quite high, so it’s hard to want to try to revisit this, so I’ll be interested to see what the others experience, but as it sits, it’s not likely that I would return to this cigar.
Seth: The Warped El Oso Blanco Papa was an average cigar that had a decent start, but terrible follow-up in the second and final third. Not a terrible release for Warped though given where they’ve been the past couple years. Who would have thought that we were cheering on mediocrity? Well, Happy New Year! C’mon 2022. The cigar itself was beautiful, but it just had that average to below average quality for cigars that come out of El Titan. (Better than a lot of other stuff, but lacking.) The core flavors of cream, coffee, honey and cedar were not enough to carry the cigar, and they deteriorated as the cigar progressed in the second and final third. The price was high too for the product delivered as well. I don’t have a problem with this pricing for a cigar out of El Titan, but I do expect better flavors. Average cigar at best!
John: The Warped El Oso Blanco Papa started out promising in the first third with a medley of flavors that kept me engaged. Unfortunately, as the cigar progressed, it became linear, and never seemed to return to the same flavor delivery as the first third. Draw was perfect, and the burn required a touch-up and a re-light during the review. Given the flavor performance coupled with some burn issues, and a super premium price point, there are many other Warped offerings I’d be inclined to reach for next time around. Total smoking time was 2 hours and 10 minutes.
Jiunn: Strong start leading to average and ultimately falling to subpar. The first third was engaging off the start, with a non-typical savory salt backbone and plenty of accompanying wood and nuts earthiness. But as the Warped El Oso Blanco Papa progressed, it first became monotonous and ended with a harsh bite. This is typically not the type of experience I get from El Titan de Bronze. I’ll mark this as a one off and move on.