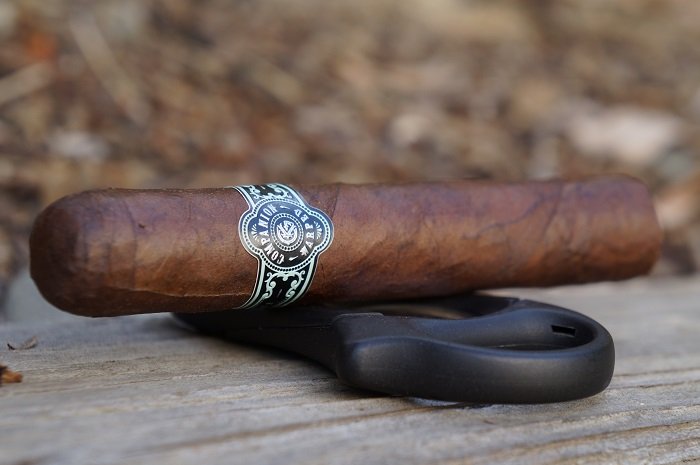 Aaron: The wrapper on the Warped Companion de Warped is medium brown and has some darker lines and spots present. There is a network of lightly raised veins. The seams are smooth and caps well applied. The band is black, Tiffany blue and silver and denotes the line name. The aroma from the wrapper is a subtle smoky wood while the foot brings a mix of cedar and graham cracker. The pre-light draw brings a light, smoky cedar note along with a mild spiciness on my lips.
Seth: Finished with a dark Colorado Maduro wrapper, the Warped Companion de Warped is oily and firm throughout. Medium sized veins present throughout, and tooth as well. Aromas of oak, barbecue, pipe tobacco, chocolate and rich earth.
John: The Warped Companion de Warped comes in cellophane and has a UPC sticker that tears in half when the cellophane is opened. The cigar is single banded and does not have any artisanal complications. Aromas from the wrapper included sweet bread, mild wood and tobacco. From the foot, the cigar has sweet tobacco mixed with hay, and then some wood underneath. Feeling the cigar, it is firmly packed with tobacco throughout.
Jiunn: The Warped Companion de Warped has a shiny Colorado Maduro wrapper shade. Veins are well pressed, seams tight, bunch and roll loose and head is well capped. Aromas from the wrapper give barnyard and dried almonds. Aromas from the foot tell the same but with added black pepper spice. Cold draws reveal hay and roasted mixed nuts. 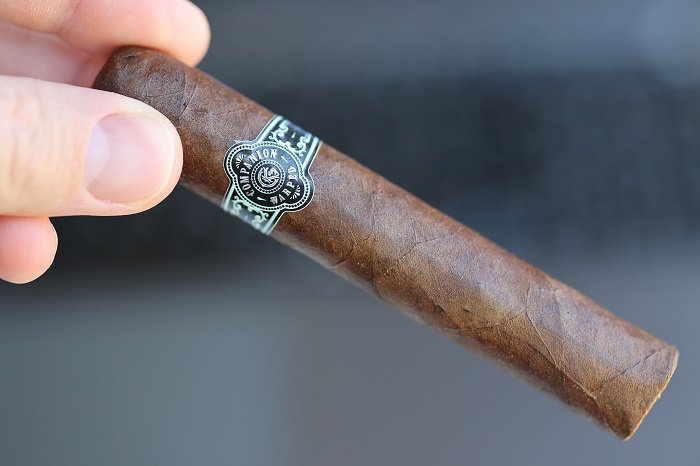 Aaron: The cigar begins with lightly toasted cedar and black pepper. At a quarter inch in, a light mustiness joins the profile. At a half inch in, the black pepper has become pretty full. The retrohale is toasted cedar and mild black pepper. At an inch in, a light smokiness appears. As the third comes to a close, the toasted cedar with light amounts of mustiness and smokiness is up front with the black pepper just slightly behind. The strength was right at medium.
Seth: The first third opens with some sweet peppery spices that are paired with some sweet fruit bread qualities. Rich earth, coffee and cocoa present as well. Medium-full in strength and body.
John: The first third opens with sweet wood, which carries into the post draw. Some bread comes through after a few puffs, followed by medium strength spices. As the first third settles in, molasses and full strength spices are present through the retrohale. As the first continues, syrupy molasses sweetness begins to offset the spices at the end of the draw. I still find red pepper flake is full strength on the post draw lingering between draws. Around the 10 minute mark, chocolate mixes with espresso on the retrohale. The spices and red pepper that are so full, begin to recede to medium by the 15 minute mark. Espresso is leading the retrohale by the halfway point.
Jiunn: The first third gives a good depth of dry red pepper spice (when the wrapper burns), minerals and sweet hay. Retrohaling tells of intense black pepper spice. The finish has cedar on the rear palate and a general lengthy dry red pepper spice. Strength and body is medium. 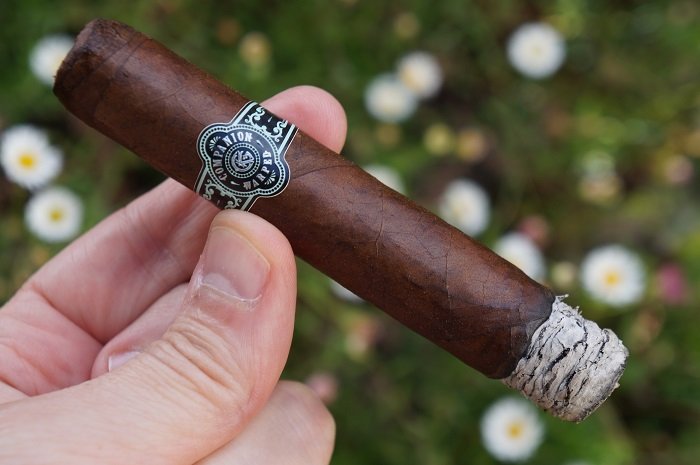 Aaron: As the second third begins, some earth joins the profile and the black pepper has mellowed a bit. The retrohale is now toasted cedar with light earth and black pepper. At an inch in, the black pepper is now pretty mellow. As the third comes to a close, the lightly musty and smoky toasted cedar remains up front with dry earth a bit behind and black pepper in the background. The strength remained at medium.
Seth: The second third is fairly in line with the first third and it is delivering those peppery spice notes with rich earth, sweet fruit bread qualities and cocoa. Medium-full in strength and body.
John: The second third kicks things off with bread, syrupy sweetness and trailing spices into the post draw. It builds in intensity on the post draw to medium-full between puffs. As the second third settles in, wood is present in the center of the profile, with mild dryness. That wood begins to lead the profile as it continues. Moving towards the halfway point, earth is present through the end of the draw.
Jiunn: The second third tips the balance such that the profile is highly mineral and harsh dry red pepper spice on the back end. Strength increases to medium-full, and body remains medium. 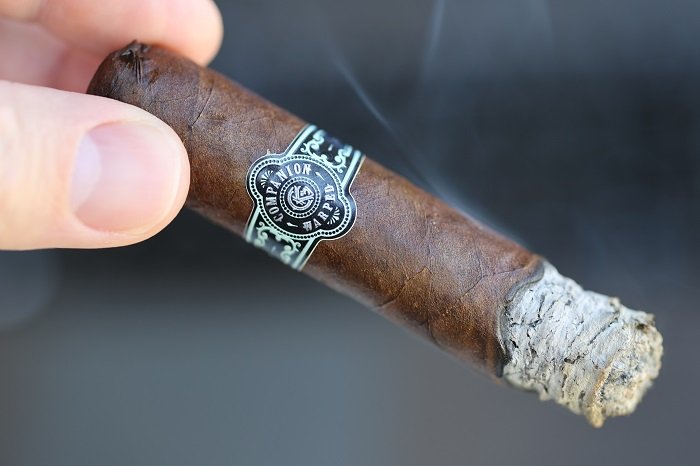 Aaron: As the final third begins, the toast level increases. The retrohale remains toasted cedar with light earth and black pepper. At an inch in, the cigar warms up a bit, bringing some vegetal bitterness. As the cigar wraps up, the profile is lightly musty and smoky toasted cedar up front with dry earth a bit behind and black pepper and vegetal bitterness in the background. The strength remained at medium.
Seth: The final third is in line with the second third. I am getting those peppery spice notes with rich earth, sweet fruit bread qualities and cocoa. Some coffee notes too. Medium-full in strength and body.
John: Earth combines with bread as the cigar moves into the last third. Lingering wood and earth carry into the post draw. Some medium strength spices return at the end of the draw as the last third settles in. Earth is driving the profile as it continues. Some time later, the cigar takes on some mintiness as it heats up.
Jiunn: The final third continues to show abundant minerals and harsh dry red pepper spice. There is also a construction paper note as well. Strength and body finishes the same medium-full and medium, respectively. 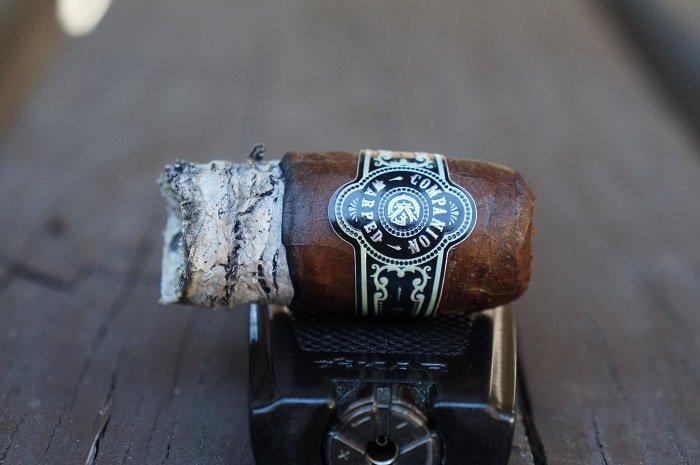 Aaron: The burn was slightly wavy at times, but never needed any intervention. The ash held on in inch and a quarter increments.
Seth: Burn was off from time to time.
John: The burn stalled slightly out of the gate, but recovered without intervention. The burn was straight through the entire review with half inch ash increments.
Jiunn: Burn performance was overall good, but not without it’s faults. The main issue was wrapper burn. Without the wrapper burning in conjunction with the other leaves, the profile deteriorated quite a bit, as the wrapper gave a richness and spice that complimented the profile very well. 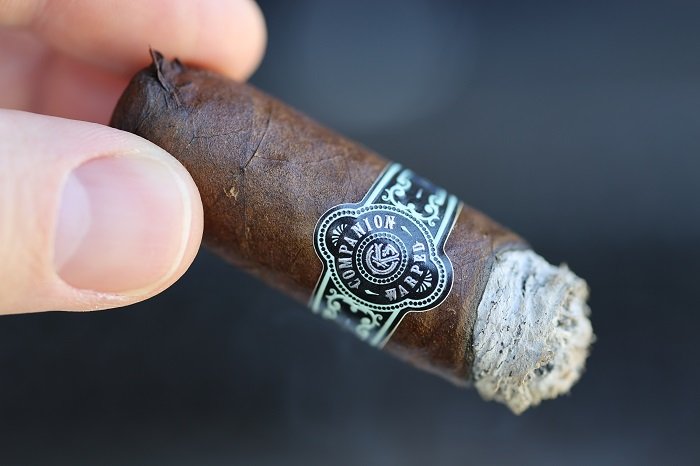 Aaron: The cigar began with lightly toasted cedar and black pepper. Some light mustiness joined in fairly quickly and some smokiness a bit later. The second third saw dry earth join. The final third saw a light vegetal bitterness join as the cigar warmed up. The Warped Companion de Warped had a nice start, but dropped to average in the second third as the pepper became less of a focus and maintained that level the rest of the way. Nothing wrong with the cigar, just not all that exciting and I don’t see this as something I’d be eager to return to.
Seth: I really enjoyed the Warped Companion de Warped. The profile grabbed my attention throughout, and I liked how it went back and forth between sweet and spicy. The sweet fruit bread, coffee and cocoa qualities were great. It had a nice strength and body level as well. Burn was not as good as I would have liked, but overall, not a major issue. A nice blend that caught me by surprise.
John: The Warped Companion de Warped started with some great flavor combinations and complexity in the first third. The second and last thirds were still pleasant overall, but didn’t quite reach the same level as what was initially offered in the first third. The draw had some resistance to it, and the burn was perfect. Overall, the flavor was slightly above average, and coupled with the price point, there are other Warped offerings I would reach for before returning to the Companion de Warped. Total smoking time was 1 hour and 45 minutes exactly.
Jiunn: The Warped Companion de Warped had a great start, deteriorating to below average. It may seem like I’ve been throwing a lot shade at Warped for the last couple years, but I don’t mean it in a malicious manner. I am however disappointed in the brand because it used to be banger releases after another. I’ll be patient and still hope for those days in the future.