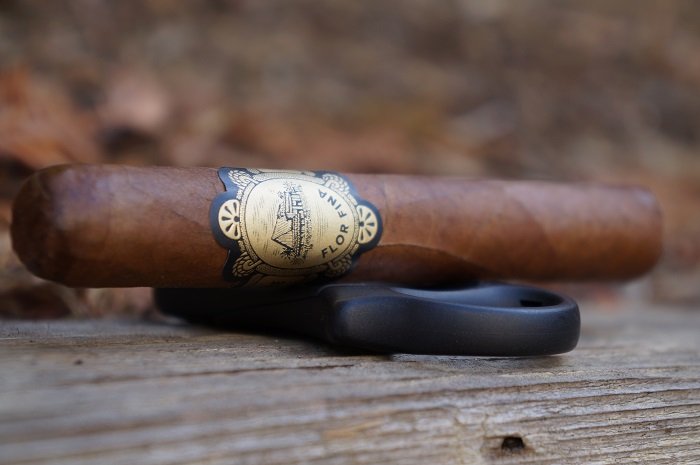 Aaron: The wrapper on the Warped Chinchalle is light brown with some darker marbling and has a network of decently raised veins present. The seams are pretty smooth and the caps are well applied. The band is gold and black with a building on the front and the line name on the sides. The cigar is a bit heavy for its size. The aroma from the wrapper is a light mix of wood and earth while the foot brings wood and stone fruit sweetness. The pre-light draw is quite tight but brings cedar, stewed fruit and crushed red pepper along with a mid-level spiciness on my lips.
Seth: The Warped Chinchalle is an ugly cigar. The wrapper is terrible. It looks like a maduro that I have left out in an ashtray for a couple weeks during the summer where there has been some days of rain. The aroma is that of earth, leather, cedar and tobacco. Medium to large sized veins present throughout the cigar.
John: The Warped Chinchalle is cellophaned, and does not have a UPC code. The cigar has an additional complication of a flat style cap. Aromas from the cigar I could define were wood, mild bread, mild moss and mild citrus. From the foot, I could detect sweet tobacco and bread.
Jiunn: The Warped Chinchalle has a shiny, natural leather brown shoe wrapper coloration. Veins are well pressed, seams tight, bunch and roll even and head well wrapped. Aromas from the wrapper tell of dank barnyard. Aromas from the foot give sweet roasted nuts and white pepper spice. Cold draw reveals nuts and slight hay. 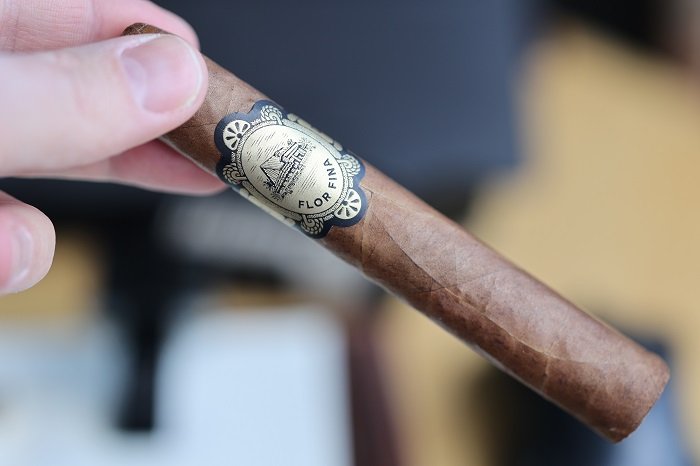 Aaron: The cigar begins with musty cedar and a pretty potent cinnamon forward baking spice. At a half inch in, the baking spice has mellowed and a light chalkiness has joined the profile. The retrohale is musty cedar and chalkiness. At an inch in, the baking spice is very mellow. As the third comes to a close, the profile is musty cedar up front, chalkiness in the middle and baking spice in the background. The strength was slightly below medium.
Seth: The first third begins with this damp wood flavor profile that is showing some earth and leather qualities. I am picking up some faint herbal creaminess, and it has some pepper on the finish. Long and sharp finish. Medium-full in strength and body.
John: My first few puffs serve up honey, wood and mild bread. I’m struggling to get significant smoke production in the first 5 to 10 minutes. Wood moves into the center of the profile as it progresses, as some sharp herbal notes and moss come through on the retrohale. Some time later, moss and citrus come through at the end of the draw. By the halfway point, the profile is wood forward, with a bread and wood combination remaining on the retrohale.
Jiunn: The first third is a mix of some nice qualities and some not so nice ones. The cigar no doubt has depth, especially in dry red pepper spice and cedar. But what’s not so great is an overstated burning paper and wood bitterness combining that depth. Retrohaling is by far the best part because it’s all about that spice and a nice creamy nuttiness without any of the bitterness. Strength is medium-full, body is medium. 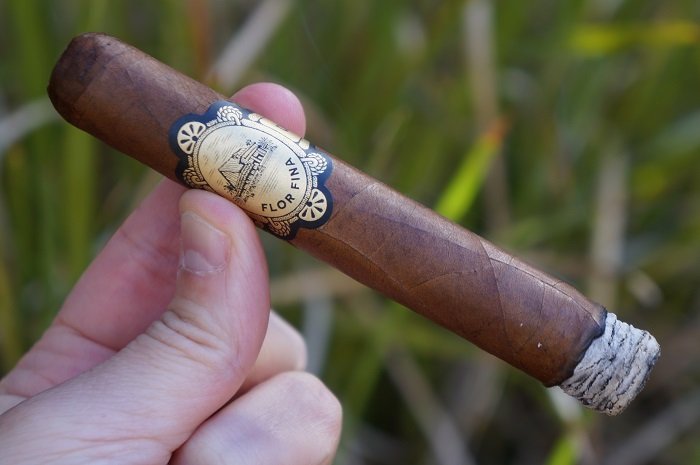 Aaron: As the second third begins, the chalkiness becomes even with the musty cedar. At a half inch in, the musty cedar gains a toast note. The retrohale is musty, toasted cedar and light chalkiness. At three quarters of an inch in, the light baking spice has transitioned to a light, dull black pepper. As the third comes to a close, the musty, toasted cedar has a slight lead over the chalkiness while the dull black pepper remains light in the background. The strength in this third bumped up to medium.
Seth: The second third delivers those damp wood and pepper spice notes from before. The leather and cream notes are there and it has that earthy and herbal quality on the finish. Like before, medium-full in strength and body. Very similar to the first third.
John: The second third begins with citrus, medium-full strength baking spices and wood all on the retrohale. As the second third settles in, mild cocoa pushes into the retrohale. Some time later, dry cedar joins the post draw, lingering between each puff. Bread returns to the retrohale in the bottom half.
Jiunn: One word comes to mind in reference to the second third: acrid. The burning paper mixed with wood bitterness and sharp mineral harshness is at times seriously overbearing. Needless to say, it’s not a very enjoyable experience. Strength and body remains medium plus and medium, respectively. 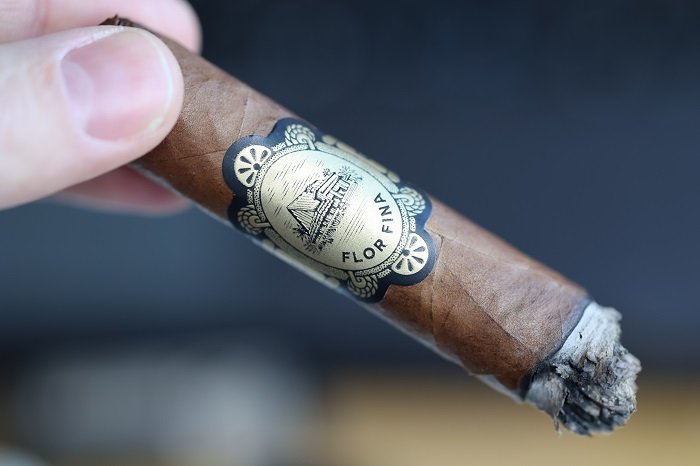 Aaron: As the final third begins, the chalkiness has become quite light and is even with the black pepper in the background. At a half inch in, the toast level becomes pretty heavy. The retrohale is musty, toasted cedar. At three quarters of an inch in, the chalkiness and black pepper have departed. The cigar wraps up with musty, heavily toasted cedar. The strength remained at medium.
Seth: The final third is slightly better than the first and second third, and that is due to the finish not being so sharp. The flavor profile itself was still lacking and not enjoyable. Leather, wood, pepper and cream.
John: Dry wood carries the cigar into the last third. Some bread mixes in with the wood through the retrohale as it settles in. The wood takes on a tannic quality along with dryness as the last third progresses. Some mild bitterness comes through the center of the profile in the bottom half.
Jiunn: The final third calms the acridness by quite a bit. What I’m left with is a mundane profile centered around minerals and cedar. Strength and body finishes the same medium-full and medium. 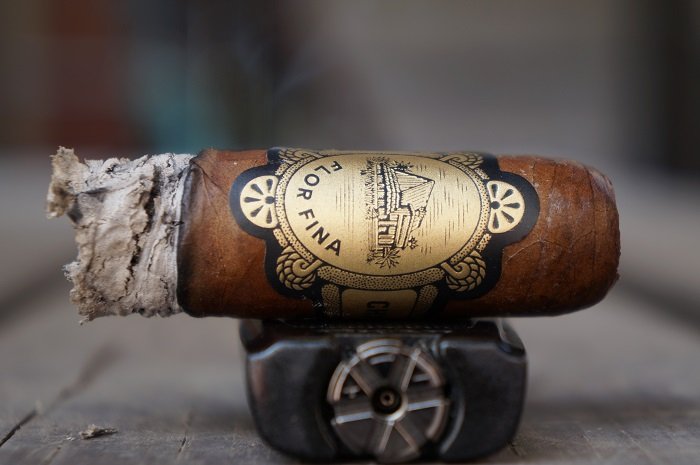 Aaron: The burn was a bit wavy at times, but never required any attention. The ash held on in inch and a quarter increments.
Seth: Burn was average throughout.
John: The cigar struggled to burn in the start of the first third, but seemed to be fine around the 15 minute mark. The ash held on up to 1-1/2 inches at points.
Jiunn: Burn performance was nearly perfect. Just a couple quick touch-ups required to get the burn back on track. 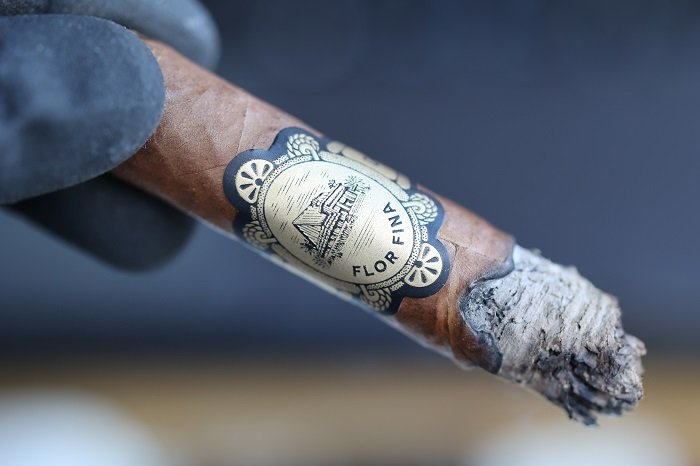 Aaron: The draw was pretty snug through the first two thirds and then opened up a bit in the final third.
Seth: Draw was good.
John: The draw initially starts out 3 to 3-1/2 notches into the resistant spectrum, which would be an average rating. Some time into the first third, the draw opens to 2 to 2-1/2 notches into the resistant spectrum.
Jiunn: The draw was perfect, giving the ideal air flow and resistance.

Aaron: The cigar began with musty cedar and baking spice and then gained some chalkiness fairly quickly. The second third saw the cedar gain a toast note and the baking spice transitioned to black pepper. The final third saw the pepper and chalkiness depart as the toast level ramped up. Overall, the flavor profile of the Warped Chinchalle was pretty average. The chalkiness was a bit of a detractor and I’m not sure if the tight draw impacted the flavor profile. It was interesting smoking a cigar from this new factory, but as it sits, I wasn’t all that impressed with this offering and don’t see myself returning.
Seth: It’s interesting to see when a brand owner blends with multiple factories in different countries. We never know how involved they are with their blends, but we get to assume that if they have success with Factory 1, they should have some success with Factory 2. Or any other following factory. Kyle has had some early success in Miami, and he had some early success in Nicaragua. In recent years though, I am not seeing or smoking anything positive. That is definitely the case for the Warped Chinchalle. I guess you can’t run away to the Dominican Republic.
John: The Warped Chinchalle is a stark departure from the Warped strategy of largely Nicaraguan blended cigars. Unfortunately for me, moving to a largely Dominican blend resulted in a profile that was quite linear and monotonous through the review. While the flavors themselves were by no means poor, or harsh, they didn’t come together in an interesting or engaging way that would make me want to smoke another Chinchalle. The draw had some resistance to it, and the burn was largely perfect. Total smoking time was 1 hour and 58 minutes.
Jiunn: I was very excited to see how Warped would utilize non Aganorsa tobaccos. After smoking the Warped Chinchalle, it’s honestly a big let down. This is basically everything I hate about a cigar: acrid, bitter and sharp. I sure hope it gets better from here. Given my lack of enjoyment, it can really only go up from here.