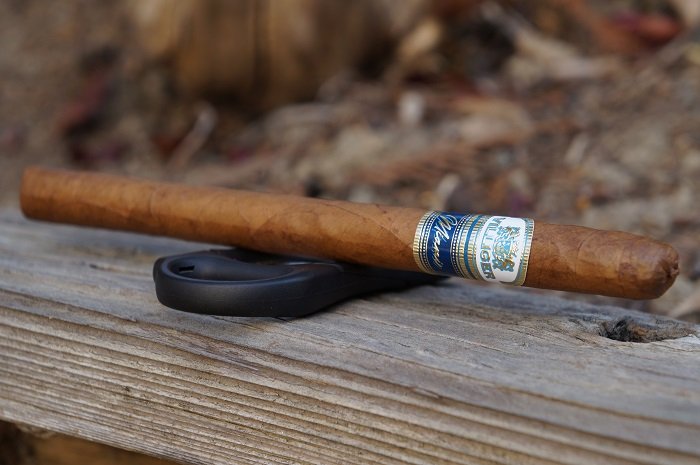 Aaron: The wrapper on the Villiger Miami 2022 Laguito No. 1 is light brown and has a network of raised veins that carry a darker color to them. The seams are a bit loose in some areas and the cap is well applied and finished with a small flag. The band is the traditional design for the company and this one is white, gold and various shades of blue and denotes the company and line name. The aroma from the wrapper is a mix of cedar and cardboard, while the foot brings cedar and a sweetness that I can’t quite identify. The pre-light draw brings a nice floral and airy cedar combination.
Seth: The Villiger Miami 2022 Laguito No. 1 is a rough looking lancero in appearance. Wrapper was slightly toothy with veins throughout. You could feel the veins throughout and it was slightly gritty in texture. Some soft spots. Could anyone else not read Miami?
John: The Villiger Miami 2022 Laguito No. 1 comes in cellophane but does not have a UPC sticker. The cigar is single banded and has the additional artisanal complication of a fan cap. Aromas from the wrapper included barnyard and spicy wood. From the foot, some sweet hay and grape sweetness.
Jiunn: The Villiger Miami 2022 Laguito No. 1 has a Colorado Claro wrapper shade. Veins are decently pressed, seams tight but visible, bunch and roll on the loose end, which is as expected of a small ring gauge. Aromas from the wrapper tell strong notes of jasmine flowers and barnyard. Aromas from the foot give primarily dry red pepper spice and hay. Cold draw reveals quite a bit of thin and airy flavors (hay, cedar, dried red pepper spice). 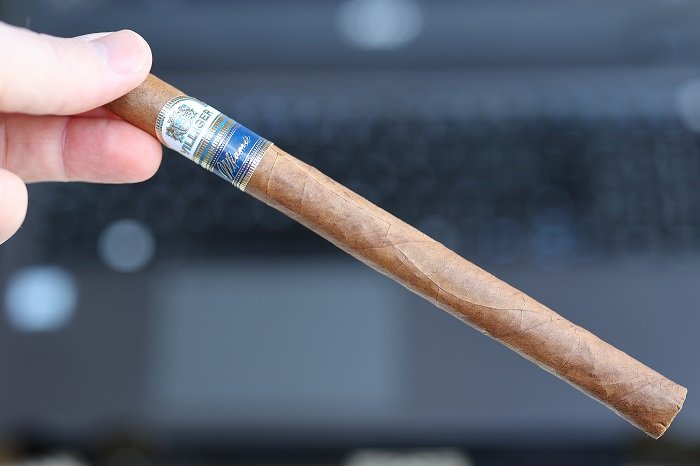 Aaron: The cigar begins with cedar and slightly sharp black pepper. At a half inch in, the black pepper loses the sharpness and a faint burning paper note joins the profile. The retrohale is lightly toasted cedar and zingy black pepper. At an inch and a quarter, the pepper mellows a fair amount and a light creaminess joins the profile. At an inch and a half, a light pine note joins in. At two inches in, the creaminess departs. As the third comes to a close, the profile is cedar up front with black pepper a bit behind and faint pine and burning paper in the background. The strength was mild-medium.
Seth: The first third starts out with some leather and earth notes. Bits of peppery spices with bread and paper notes. Damp barnyard creaminess. Medium in strength and body.
John: The first third gets going with baking spices, bread and wood. There is a balance to the flavors right out of the gate, and I find myself having to slow down so I’m not smoking too fast. As it continues, the baking spices move up to medium strength and it lingers into the post draw. Approaching the 15 minute mark, some chocolate is present on the retrohale. Citrus mixes into the retrohale and combines with wood by the 25 minute mark. Overall, the first third is light-plus strength.
Jiunn: The first third’s flavors are thin and a bit bland. Lots of airiness in hay, cedar and burnt toast. Retrohaling helps as it deepens the flavors (introduction of dried red pepper spice, cedar, hay), but it’s really nothing to write home about. The finish is short, with a lingering hay note. Strength and body is medium. 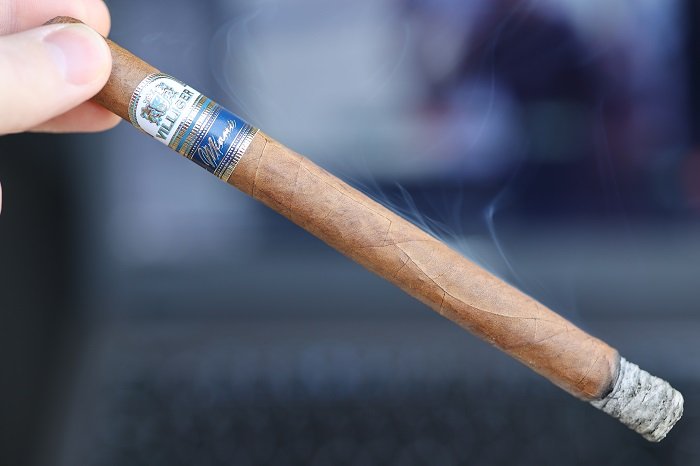 Aaron: As the second third begins, the cedar gains a toast note. At a half inch in, the burning paper note has gone away while the pine note has increased a bit. The retrohale is toasted cedar, lightly zingy black pepper and light mustiness. As the third comes to a close, the toasted cedar is up front with the pine note and black pepper a bit behind. The strength bumped up to slightly below medium.
Seth: The second third is similar to that of the first third, and I am gettting some leather, damp barnayard and earth notes. Some peppery spices with bits of paper and unpleasant cream qualities. Again, medium in strength and body.
John: Medium strength baking spices here that combines with wood as they both linger into the post draw. As the second third settles in, sweet bread comes into the retrohale. Some mild dryness joins the post draw as it continues. By the halfway point, bread, spices and wood are the components driving things.
Jiunn: The second third brings in the dried red pepper spice to the mouth draws, which helps the complexity. But it doesn’t help it enough, as I still think the blend is fairly bland. Strength and body continues to be medium. 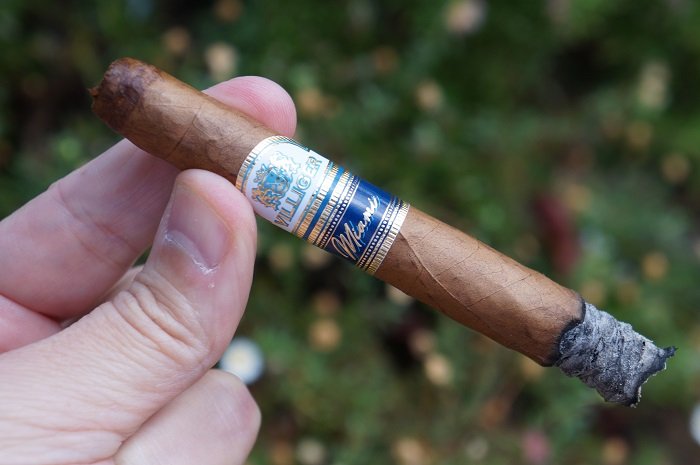 Aaron: The final third continues on with the profile of toasted cedar up front with the pine note and black pepper a bit behind. The retrohale remains toasted cedar, lightly zingy black pepper and light mustiness. At an inch in, the toast level increases and a slight bitterness becomes present. As the cigar wraps up, the pine note was right behind the toasted cedar with the black pepper a bit further behind and light bitterness in the background. The strength remained at slightly below medium.
Seth: The final third delivered that paper and pepper quality with bits of bardnyard, earth and leather. Damp tobacco and cream on the finish. Medium in strength and body.
John: Bread leads off with a mildly tannic wood that follows and the spices become a background note. Tannic wood moves to the front of the profile as it settles in. Spicy wood is driving the profile by the halfway point, with mild tannic wood on the post draw.
Jiunn: Not much redeeming qualities within the final third. It’s still a pretty basic and bland profile of dried red pepper spice, hay, cedar and burnt toast. Strength and body finishes the same medium. 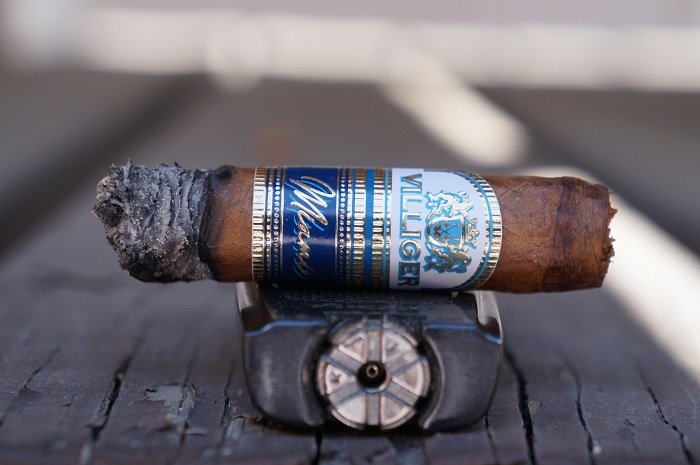 Aaron: The burn line was pretty straight throughout, but towards the end off the first third and beginning of the second third, the cigar went out three times in pretty rapid succession, requiring re-lights.
Seth: Burn was a problem throughout.
John: The burn was straight through the review with no interventions required. Ash held on in 3/4 inch increments.
Jiunn: Burn performance was overall very good. The only negative was the relatively short smoking time (less than an hour). Aside from that, burn line was even, good smoke production, solid ashes and cool burning temperature. 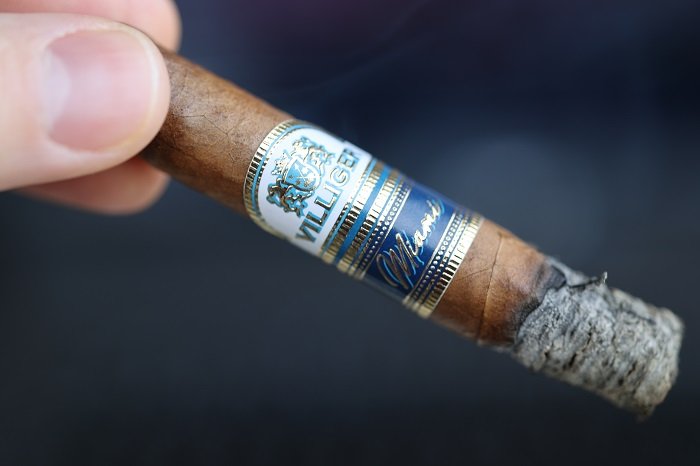 Aaron: The draw was perfect, with just the right amount of resistance that I prefer.
Seth: Draw was a problem throughout.
John: The draw was a minor amount towards the resistant spectrum, approximately one notch, which still leaves it in the ideal range for a draw.
Jiunn: Draw was just right, striking the best balance of air flow and resistance.

Aaron: The cigar began with cedar and slightly sharp black pepper. A faint burning paper note and light creaminess joined a bit later. A pine note joined a little further in, while the creaminess departed. The second third saw the cedar gain a toast note. The final third saw a light bitterness join in. The Villiger Miami 2022 Laguito No. 1 started well, with a nice, mellow flavor combination, but as the creaminess had departed and the pine note increased and some bitterness joined in, the profile was average from the second third on. I’d be interested to see how this blend smokes in the Robusto vitola, but as it stands, I’m not sure I’d be in that big of a hurry to return to this vitola.
Seth: “I’m gonna need a beer to put these flames out.” This Villiger Miami 2022 Laguito No. 1 crashed and burned. The only positive note is that at least it wasn’t made in Miami.
John: The Villiger Miami 2022 Laguito No. 1 is a strong addition to the Villiger lineup with balanced and restrained flavors through the first and second thirds. The last third was still pleasant but didn’t harmonize as well as the rest of the cigar. The draw and the burn were flawless. With a just over light-plus strength flavor delivery, this was an enjoyable cigar that breaks up a market full of medium or stronger cigars, and I would happily seek it out to smoke again. Total smoking time was 1 hour and 42 minutes.
Jiunn: I love the size and presentation of the band, but the lack in deeper flavors, as well as the monotony of flavors is what made it an average overall experience. I think a re-blend to make even the existing notes punchier will be a material uplift. But as is, this Villiger Miami 2022 Laguito No. 1 is a pass for me.