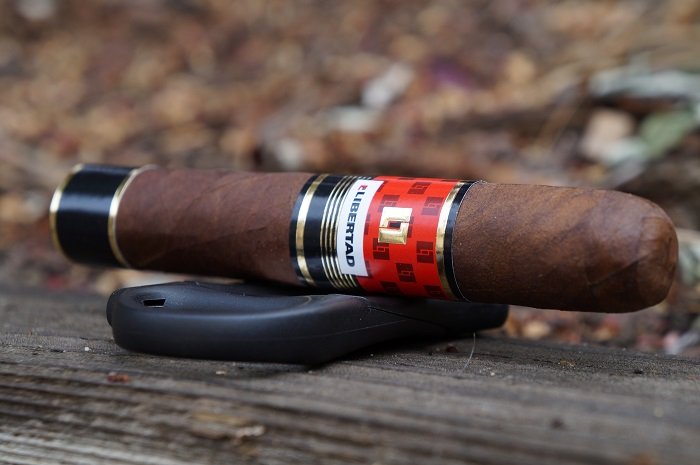 Aaron: The wrapper on the Villiger La Libertad Robusto is medium brown with a few decently raised veins and some lightly raised veins. The seams are very smooth while the head has a top cap with lifting edges. There are two bands, with the primary being red, black, gold and white and denoting the line. The foot band is black with gold borders. The aroma from the wrapper is a mix of dark earth and wood while the foot brings stone fruit sweetness and cedar. The pre-light draw is a mix of cedar, floral and graham cracker notes along with a mild spiciness on my lips.
Seth: The Villiger La Libertad Robusto is finished with a lovely Colorado Maduro wrapper. There are medium to large sized veins present throughout, and the texture is slightly oily and silky. The cigar itself is firm throughout and rolled incredibly well. The foot has aromas of bourbon barrels, cherries, rich earth, chocolateand raisins. The wrapper gives off notes of dry earth, wood and leather.
John: The Villiger La Libertad Robusto comes in cellophane and does not have a UPC code. The cigar is double banded with a primary ‘Libertad’ band and a secondary band as a foot band in black on gold. The aromas from the wrapper included aged wood, mild earth and tobacco. From the foot, some sweet, earthy tobacco and espresso accents.
Jiunn: The Villiger La Libertad Robusto has a nice darker roasted coffee brown, Colorado Maduro, wrapper shade. Veins are well pressed, seams tight, bunch and roll even and head well wrapped. Aromas from the wrapper tell of dried persimmons and hay. Aromas from the foot tell sweet roasted nuts and a hit of white pepper spice. Cold draw reveals the same untraditional dried persimmons. 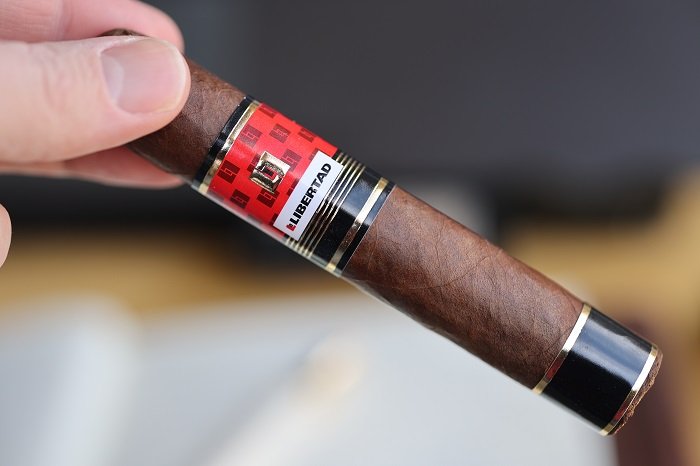 Aaron: The cigar begins with musty, lightly toasted cedar and a slightly sharp, mid-level black pepper. At a quarter inch in, the mustiness transforms into a mild chalkiness. At a half inch in, a light creaminess joins and pairs up with the chalkiness and the black pepper has lost its sharpness. The retrohale is creamy cedar and mild black pepper. At an inch in, the chalkiness picks up a bit. As the third comes to a close, the profile is lightly toasted cedar up front, chalkiness right behind, black pepper in the middle and light creaminess in the background. The strength was right at medium.
Seth: The first third starts out with a nice spicy red pepper quality. There are some oak and leather qualities present as well, and it has a finish of chocolate, coffee and herbal notes. Full in strength and body.
John: The first third opened with baking spices, graham cracker, with baking spices and wood combining into the post draw. Some sweet tobacco and sweet spices come through the retrohale. As it progresses, powdered cocoa joins the retrohale as mild tannins and wood take up home in the middle of the profile. Approaching the halfway point, some earth is present on the post draw, and mild minerality joins chocolate and wood to finish each draw.
Jiunn: The first third provides a mixture of roasted coffee and an effervescence. There’s also an underlying airy cedar. Retrohaling gives a tame white pepper spice and more pronounced cedar. The finish has a soft toasted nuttiness. Strength and body is medium. 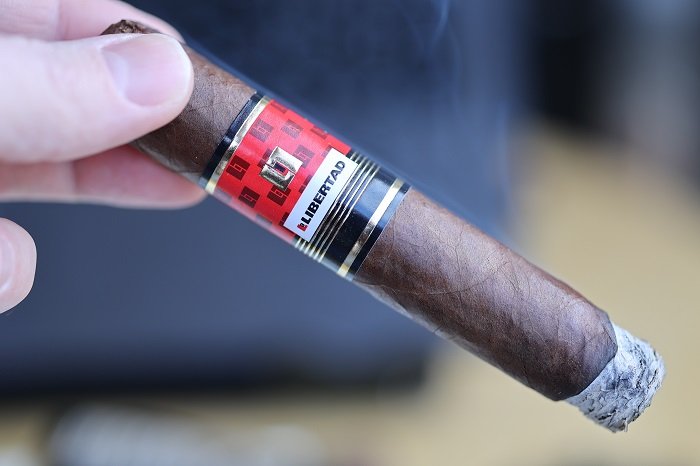 Aaron: As the second third begins, some dry earth joins the profile as the creaminess departs. At a half inch in, the black pepper has mellowed a bit. The retrohale is now toasted cedar, chalkiness and light creaminess. At an inch in, the black pepper has become very mild. As the third comes to a close, the profile is lightly toasted cedar up front, with dry earth right behind, chalkiness a bit behind that and mild black pepper in the background. The strength remains at medium.
Seth: The second third is in line with the first third. I am picking up a lot of red pepper spice qualities, and they are paired with those oak, coffee, cocoa and herbal qualities. Medium-full in strength and body.
John: The second third starts with an earth and wood combination, chocolate and wood in the middle, and baking spices with wood to finish into the post draw. Mild minerality joins the post draw after just a few puffs. As it settles, orange peel joins the middle, but is pushed down by the tannins on the wood. Approaching the halfway mark, the profile is becoming more toasted peat forward. In the bottom half, it continues to evolve into earth and cedar forward with hints of orange peel. That earth becomes dominant on the palate at medium strength.
Jiunn: The second third is starting to show some stringencies in the cedar wood. But aside from that, it’s still the same profile of roasted coffee and effervescence. Strength and body overall remains the same. 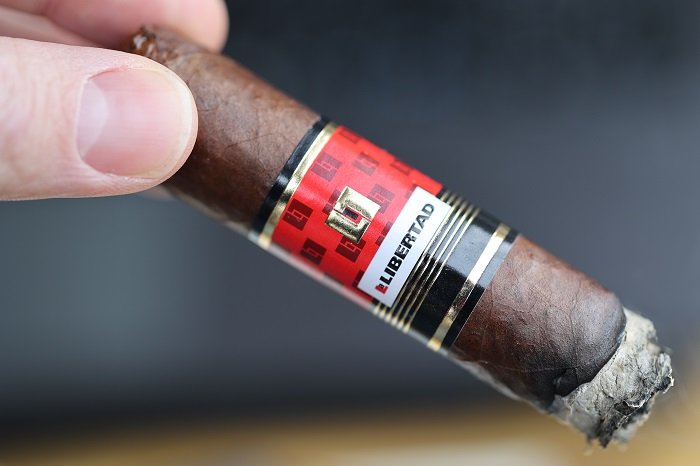 Aaron: As the final third begins, the black pepper has departed. The retrohale is now toasted cedar, dry earth with light chalkiness and black pepper. At three quarters of an inch in, the lightly toasted cedar and dry earth are even, with chalkiness a bit behind. The cigar wraps up with this same profile. The strength remained at medium.
Seth: The final third was similar to that of the second third. Lots of red pepper spice qualities that are paired with oak, cocoa, coffee beans and herbal qualities. Mineral notes also on the finish. Medium-full in strength and body.
John: Earth, wood and mild baking spices combine here with tannic wood and earth into the post draw. Some hints of citrus break through the retrohale. As it progresses, powdered cocoa pushes back against the earth at the end of each draw. Citrus and sweetness combine into the center of the profile approaching the halfway point.
Jiunn: The final third stays the course. It’s still giving me the same stringencies of cedar wood, roasted coffee and effervescence. Not the most flavorful profile but it’s certainly not a terrible one. Strength and body finish the same medium. 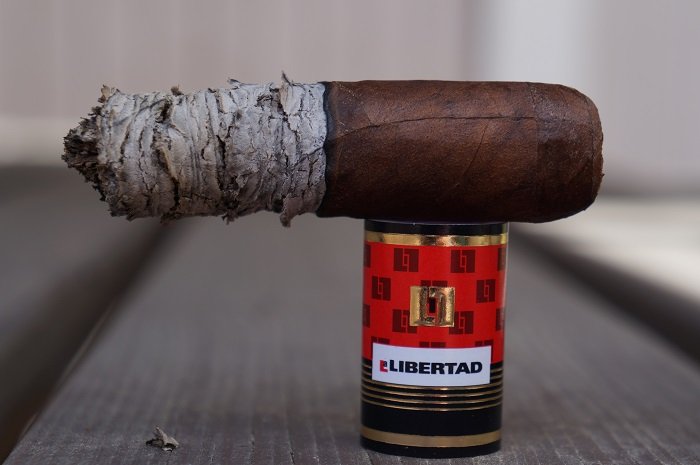 Aaron: The burn line was straight the entire way and the ash held on in inch and three quarter increments.
Seth: Started out wavy, but corrected itself in the second half.
John: The burn was fairly straight through the first third, with a bright white ash. Some unevenness to the burn moving into the second third, eventually going out at the halfway point. After a re-light there were no more burn issues. The ash held on well, typically up to one inch increments.
Jiunn: Burn performance was great. Even burn, solid ashes, cool burning temperature and ample smoke production. 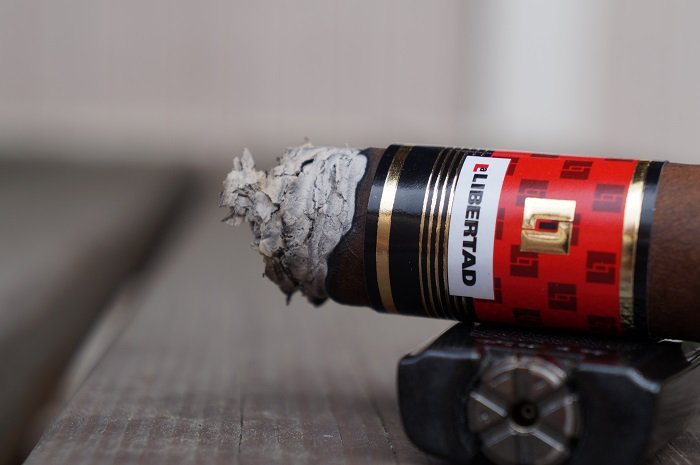 Aaron: The cigar began with musty, lightly toasted cedar and a slightly sharp, mid-level black pepper. The mustiness transitioned to chalkiness fairly quickly and a light creaminess joined shortly after. The second third saw dry earth join and the creaminess depart. The final third saw the black pepper depart. Construction was absolutely perfect. The Villiger La Libertad Robusto had an average flavor profile throughout with just some slight transitions to the levels of flavors. The price point is attractive, but I wouldn’t see it as a go to cigar. There’s not really a need to focus on flavors and I see the cigar as something that you could smoke while doing other things. I probably wouldn’t come back to this cigar very often.
Seth: The Villiger La Libertad Robusto was an enjoyable smoke and I think it would speak to a lot of smokers if they were open to a brand like Villiger. I mean no offense to Villiger with that statement. The cigar had a little bit more balance than I am finding with a lot of Nicaraguan heavy bleands, while still delivering strength and body. I am not sure if that is due to the Dominican binder, or the blend itself, but that was a nice quality. Again, nice strength and body and strong flavors. I wish it had a little bit more complexity, but overall nice.
John: The Villiger La Libertad Robusto was pleasant and dessert like through the first third. It became a darker, earth forward profile in the second third, eventually losing the balance that was delivered in the first third. The last third was more similar to the second third, as earth was the primary flavor element. The draw was perfect, and the burn required a single re-light. Although the overall complexity wasn’t as good as some other Villiger offerings, the price point might push this one into a value proposition for a lot of people. Total smoking time was 2 hours and 2 minutes.
Jiunn: This Villiger La Libertad Robusto was right in the middle of the pack average for me. The overall profile of bittered cedar, roasted coffee and effervescence, although not the most complex or detailed, was enough to get me through the cigar without thinking twice about picking another one up anytime soon. Given how relatively cheap the price point is (especially for today’s market), I say pick a couple up and try it.