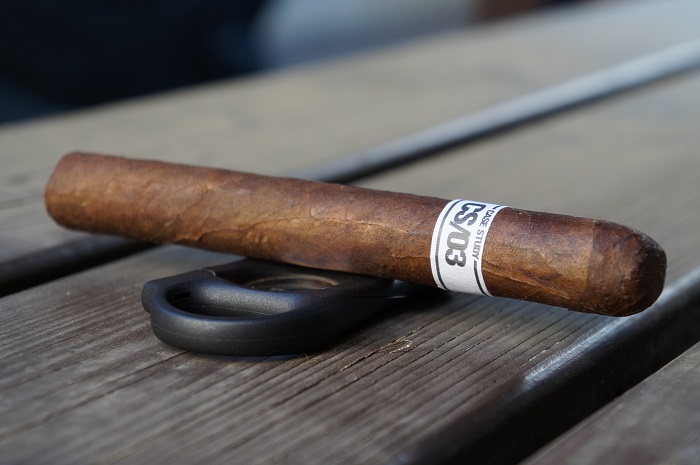 The wrapper is dark brown with some lighter marbling and has a couple of raised veins present. The seams are well blended and very hard to detect while the head is finished off with what appears to be a slightly raised double cap. The band is the standard for the line in white with black lettering that denotes which Case Study this is. The aroma from the wrapper is hay and earth while the foot brings leather and a slightly sweet hay. The pre-light draw is fairly tight and brings the same leather and sweet hay from the foot aroma. 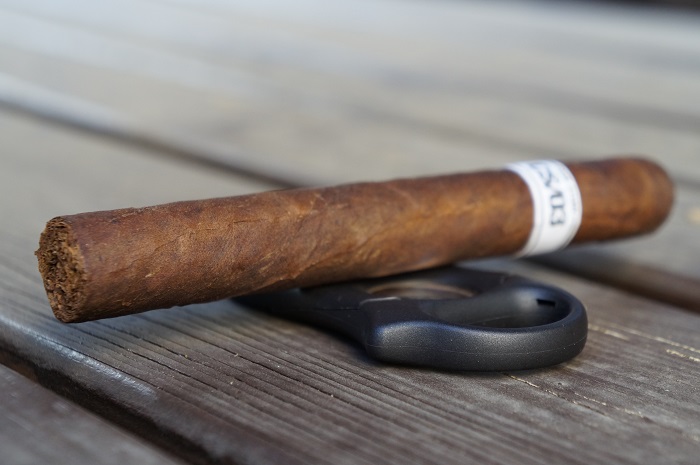 The Ventura Case Study 03 has a dark chocolate colored and rustic toothy wrapper. The cap is a bit rough and uneven. The nose on the wrapper is heavy leather, cedar and pepper. The foot has aromas of sweet tobacco. As with the other Case Study releases, the band is a fairly simple paper band with black letter on a white background. 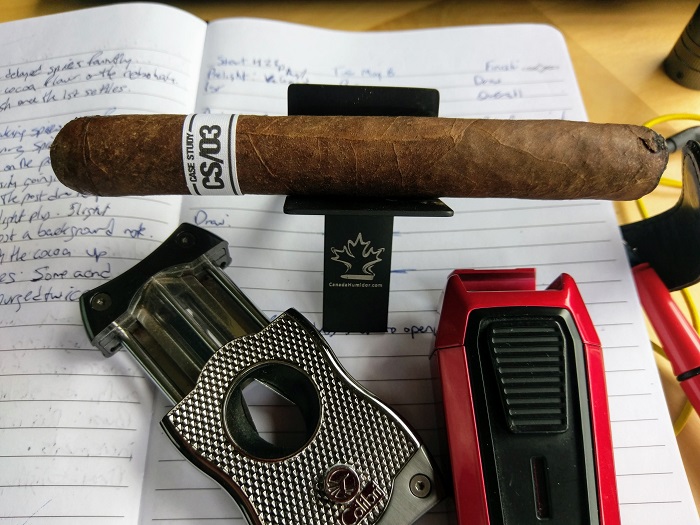 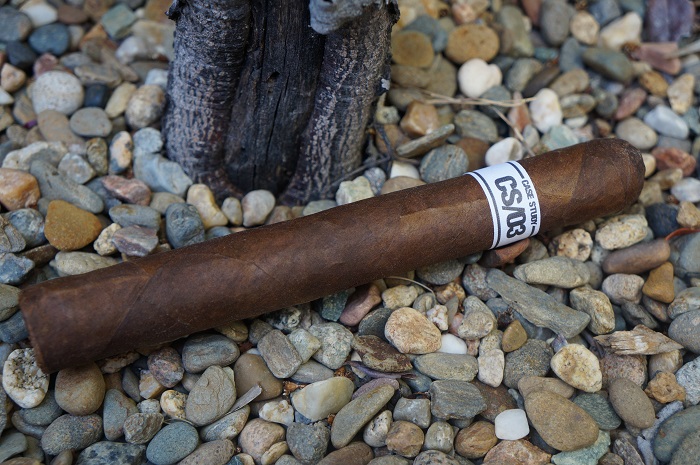 The cigar begins with spicy cedar along with some cream, earthiness and black pepper. At a half inch in, some cocoa joins the mix with the spicy cedar, cream and earthiness while there is still some black pepper on the finish. At an inch in, the cedar transitions to oak, even though a spice remains, while the cocoa and earth remain and the cream and black pepper fade out of the profile. At an inch and a quarter, the cocoa note becomes a bit chalky. At an inch and a half in, the chalky cocoa note has moved up front while the oak and earth are in the background. As the third comes to a close, the spiced oak moves back to the front with the chalky cocoa and earthiness in the background. The strength in this third was right at medium. 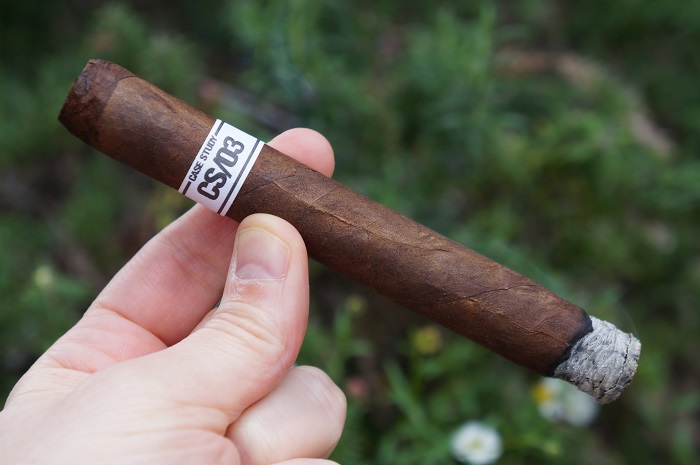 The opening profile on the Ventura Case Study 03 has a sour citrus flavor to open. Intense spices follow on the retrohale, along with an intense powdered cocoa that even provides a powdered cocoa mouthfeel. Based on the amount of powdered cocoa, my assumption is that the wrapper is San Andres. As the first third continues to progress, some sweetness begins to build, blending into the sour citrus. At the 20 minute mark, some light plus post draw leather is present, but it doesn’t heavily coat the palate. The intensity of the spices back off to a medium level at the middle of the first third. At the bottom half of the CS/03 some earthiness comes into play at a light plus level. 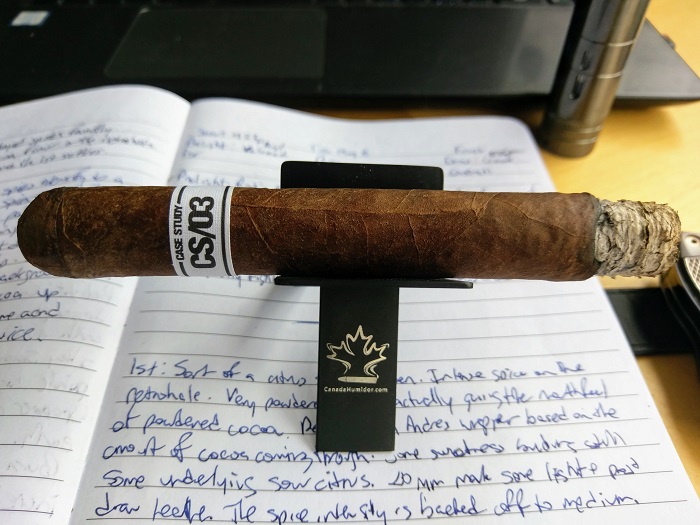 The first third exhibits quite a bit of sweet and earthy undertones. Flavors of creamed oak and synthetic sweetness takes the palate. Further, dry red pepper spice and minerals helps balance out the sweetness. Retrohaling gives bigger doses of dry red pepper spice and minerals. The finish consists of creamed oak lingering on the palate for minutes. Strength and body is medium. 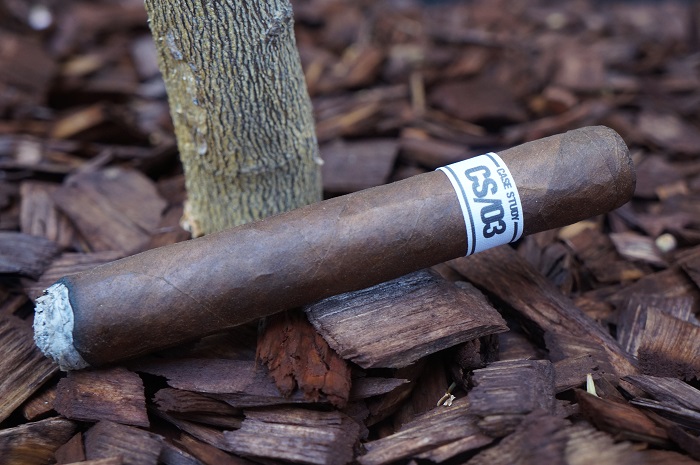 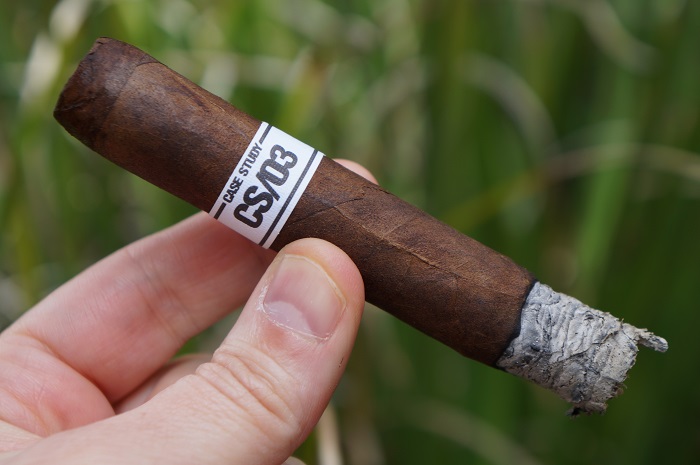 The powdered cocoa is more muted going into the middle third. Some slightly spicy cedar starts to make itself known here. The earthiness from the bottom half of the first third starts to blend into the sour citrus, and begins to linger on the post draw palate. 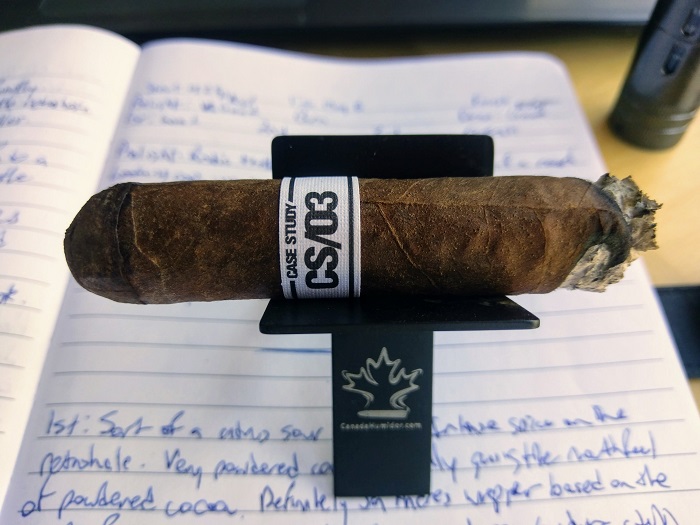 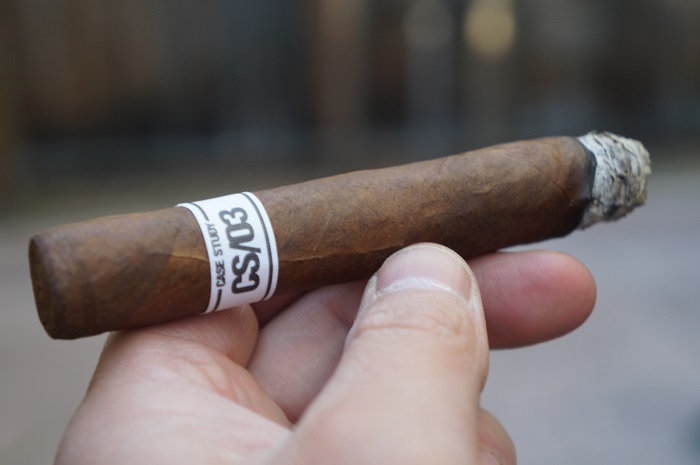 As the final third begins, the cocoa disappears while the chalkiness remains up front with the spiced oak as the earthiness is still a background note. At a quarter inch in, the spiced oak takes the lead over the chalkiness and earth while the retrohale has the same profile. At a half inch in, along with the spice, the oak takes on some char. At an inch and a quarter, the cigar begins to warm up bringing some mintiness to the profile. As the cigar comes to a close, the oak is up front carrying some char and mintiness. The strength in this third bumped up to slightly above medium. 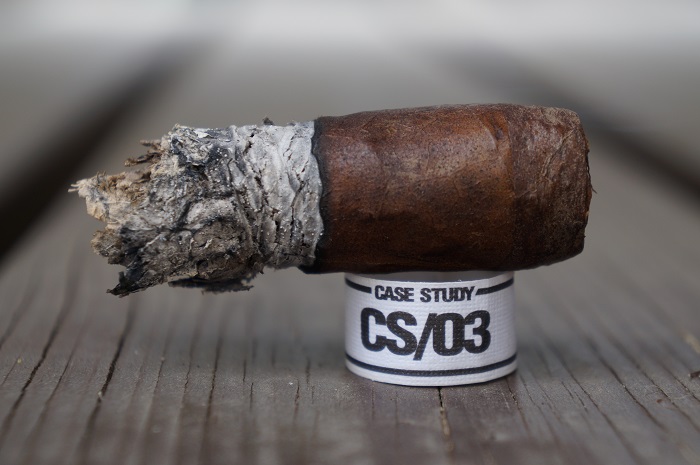 The earthiness from the middle third continues to carry into the final third as the prominent flavor note. By the time the final third establishes itself, the earth is dominating entirely, pushing the cocoa and spices to the background. 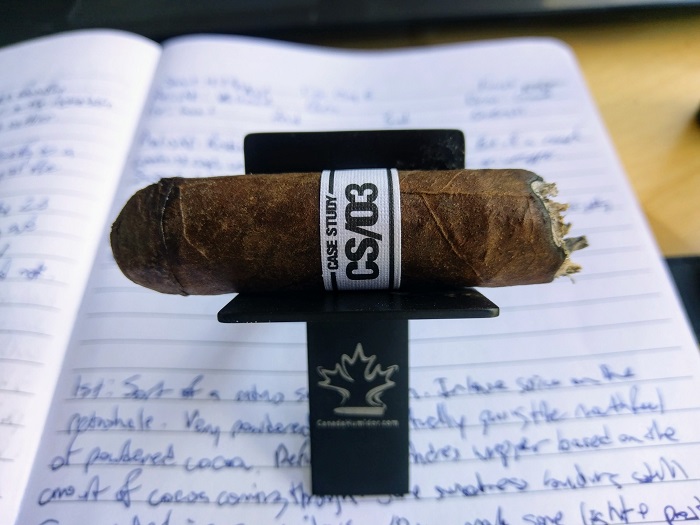 The focus of the last third is spice and minerals. Dry red pepper, baking spices, minerals on both mouth draws and retrohales (with the retrohales being quite assertive with especially spice). The finish smooths out such that it is now a long and lingering tamed dry red pepper and dry wood. Strength is a tad above medium and body finishes medium. 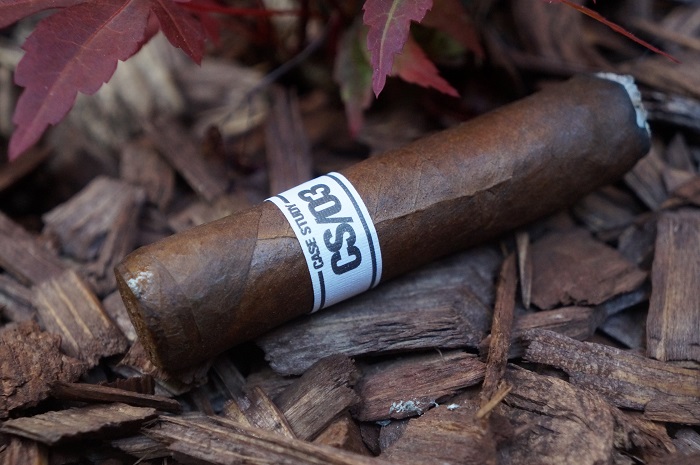 The burn was slightly wavy through the first half and then required a couple of touch-ups in the second half. The ash held on in inch and a quarter increments. 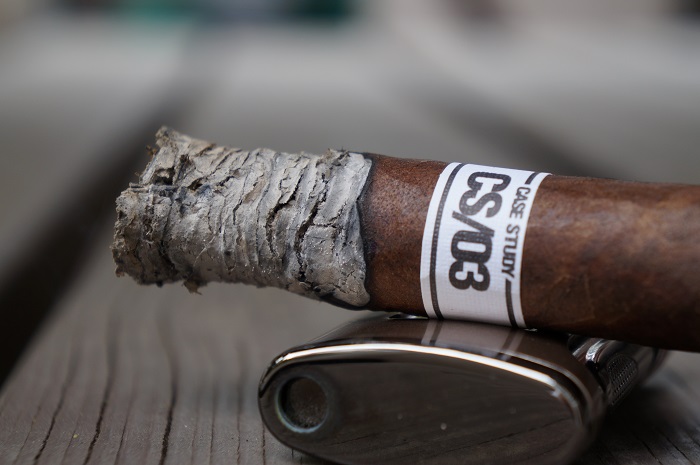 The ash on the CS/03 held on well in one inch increments. The burn was very straight with a slightly flaky ash. 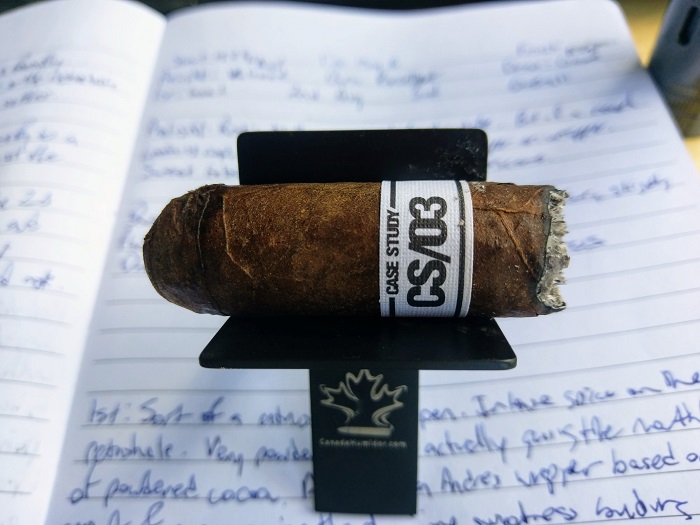 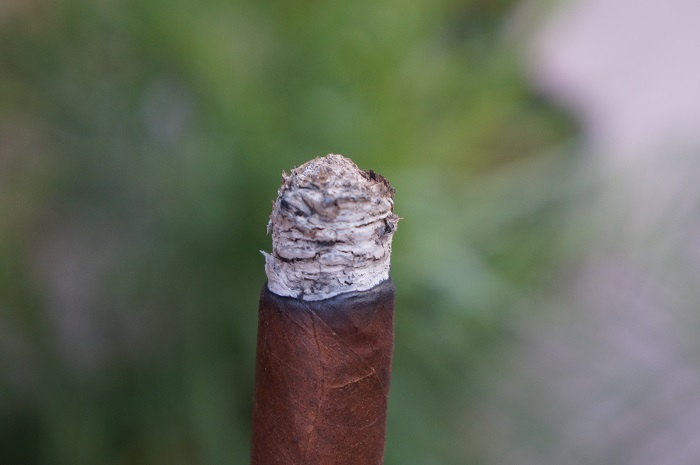 The draw was fairly snug throughout, but I didn’t feel it caused any issues with the smoking experience.

The profile started with some spicy cedar which transitioned to a spiced oak and there was cocoa which became chalky along with some earthiness. The profile became a bit mundane after a while. Construction was OK as there were some wrapper burning issues and a tight draw to contend with. This isn’t my favorite of the Case Studies, but still a serviceable offering, although it carries a high price tag. I’d be interested in trying this in a smaller vitola as I think it would keep the flavor profile a bit more exciting.

The draw is fairly tight, and opens up somewhat part way through the first third, although I would still describe it as tight.

The Ventura Case Study 03 Toro is the second entry in the Case Study series I’ve had an opportunity to review. Like the previous Case Study, the cigar started out really well, with significant amounts of complexity that held my attention. I was hoping that the intense powdered cocoa and spice flavor would carry through the entire smoking experience. Unfortunately, the complexity fell off in the middle third, and never managed to recapture the flavors I enjoyed so much. I do think the Case Study series represents an interesting release, and I’m always supportive of cigar companies trying new things in the industry to move the dial. This cigar would appeal to cigar smokers who are starting to get into a more medium bodied cigar experience.

The hardness felt within the pre-light experience proved to parlay to the tight draw. Even after numerous attempts at using draw tools, the draw always tightened up.

This is the first Case Study reviewed that I can’t get on board with. The overall flavor profile was OK with the exception of the first third bringing too much synthetic sweetness on the entire palate. But by the time the cigar got into the second third, the interplay of minerals, earth and spice worked well. The over packed and firm feel of the cigar reeked havoc on the burn and draw with it’s all too many complete re-lights and snug draw. I suggest looking towards other Case Studies like the 02 or 05 for a good experience.