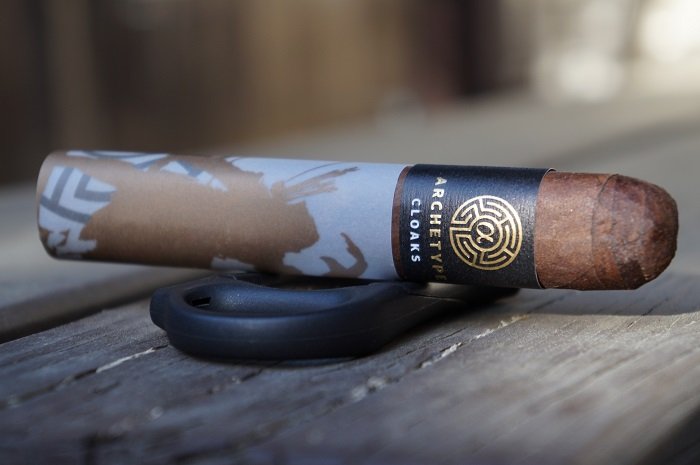 The Ventura Archetype Cloaks Robusto has an oval press to it with a marbled medium brown wrapper. The veins are well pressed and the smooth seams are only visible due to the color variation of the wrapper. The head is finished off with a well applied triple cap. The band is the standard design for this series with the brand logo in gold on black and shows the line name in white. There is a sleeve that runs from the bottom of the band to the foot that looks like parchment paper and has the outline of a character in gold. The aroma from the wrapper is a pretty full combination of wood and white pepper while the foot brings a similar profile just with a much tamer pepper. The pre-light draw brings a mix of cherry and wood with a mild spiciness on my lips. 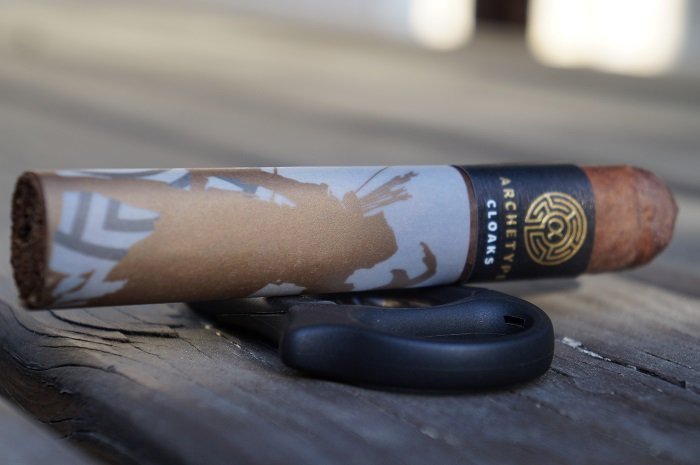 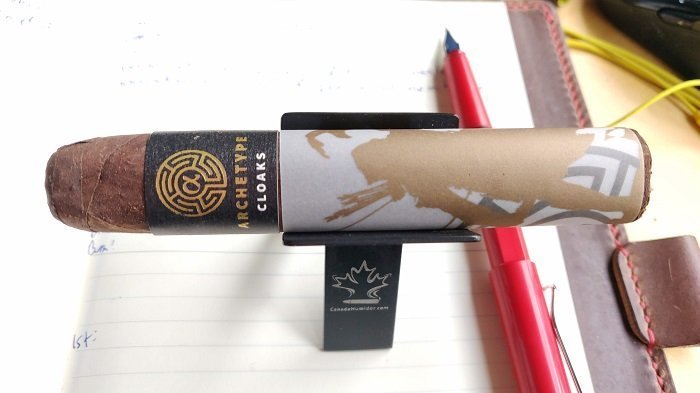 The Ventura Archetype Cloaks Robusto, as with the others in the series, has a thick semi opaque band covering two thirds of the cigar. The band appears to have a brown outline image of a hunter with a quiver on his back, a bow, and some sort of hunting bird like a hawk on his arm. The main Cloaks band has gold and white lettering on a black background. The cigar itself has a rustic wrapper and is soft pressed into an oval shape. Nosing the cigar, I get an intense dank barnyard, earth, moss and hay. In the foot, the aromas are more a subdued hay.

The cigar begins with a spicy and musty cedar that is slightly drying. At three quarters of an inch in, the mustiness and spice have increased and the profile is no longer drying. The retrohale has an even mix of mustiness and cedar with a mild spice level. At an inch in, the spice is a general baking spice. The profile maintains itself through the end of the third. The strength is slightly below medium. 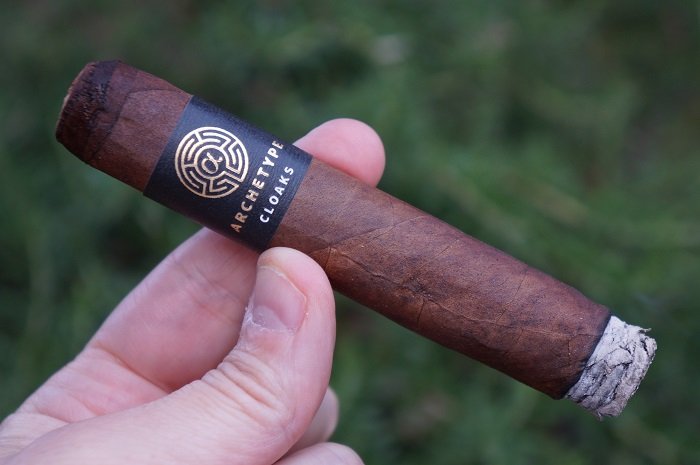 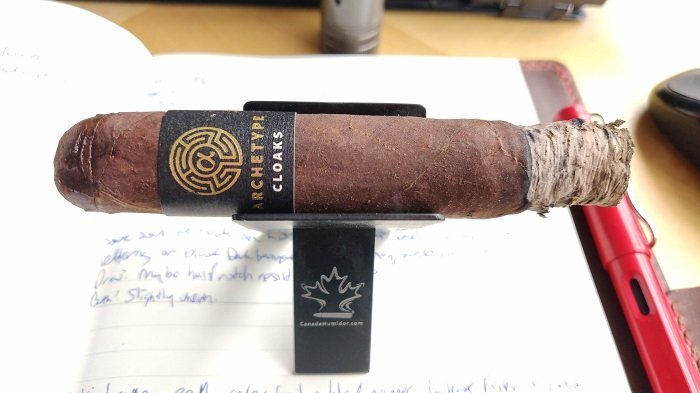 My first puff brings flavors of leather, earth, cedar and trailing black pepper that lingers into the post draw. That pepper is intense on the front of my tongue and at the back of my throat. The pepper is intensified through the retrohale. There is some creaminess underneath on the retrohale but it’s almost completely dominated by the other notes. As the cigar progresses, some baking spices come into the middle of the palate. Loamy earth joins the post draw at a light plus. By the time the cigar settles in, the post draw pepper is lingering the entire time between draws. The post draw earth takes on an acrid component in the bottom half of the first third.

As the second third begins, some char joins the cedar which lessens the baking spice. The mustiness is still a key player. At a half inch in, some bitterness joins the profile. The retrohale is carrying a fairly charred cedar. The char moves to the lead at about an inch in, and there is a subtle cocoa in the background. The strength in this third bumped up to medium. 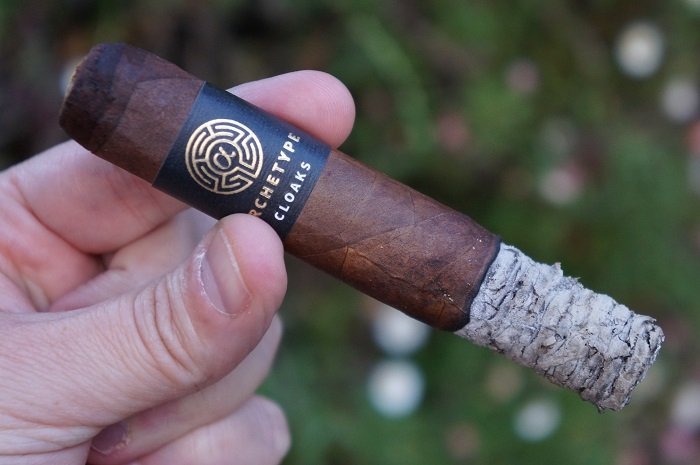 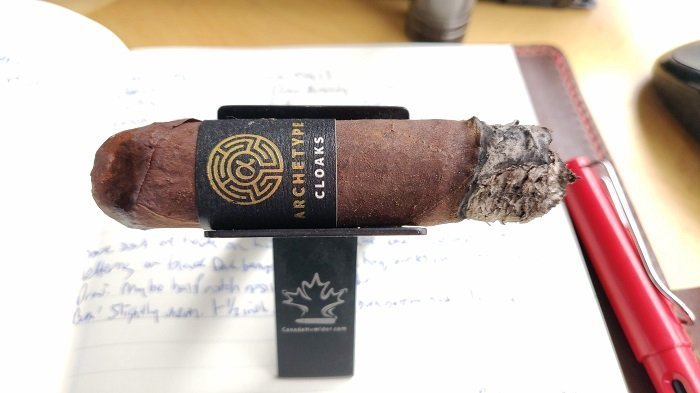 As the final third begins, the cedar has transitioned to a general wood note and become fuller to even out with the char. The mustiness is right behind it as the cocoa now has faded away. At a half inch in, the char picks up again and brings a minty finish. The retrohale brings the charred and musty wood. The cigar maintains this profile until the end. The strength in this third remained at medium. 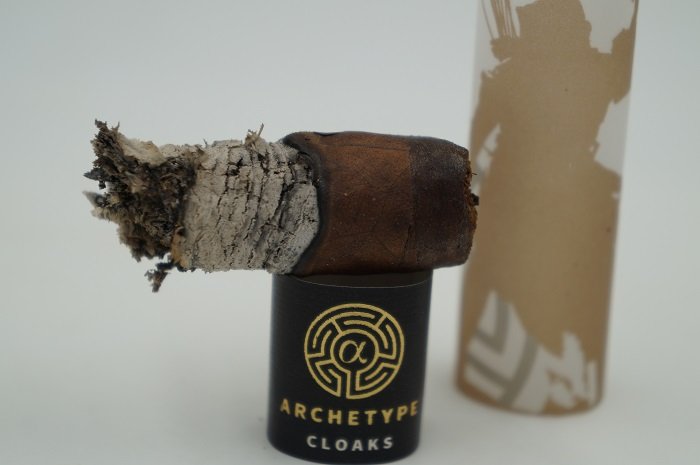 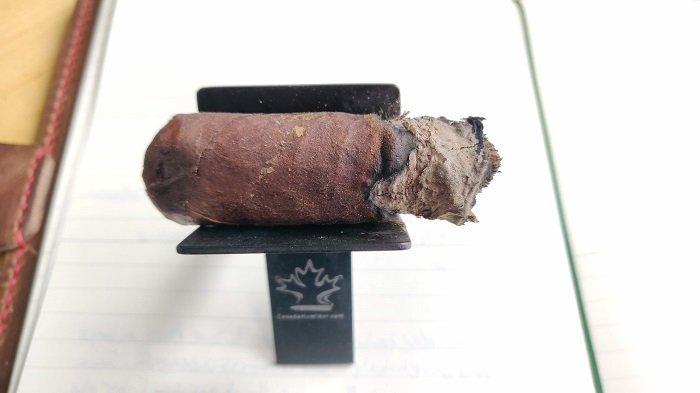 The final third begins with the same pepper and earth from the second third. There is some leather edge to the flavor as the cigar settles in. The leather continues to intensify as the cigar continues, bringing occasional cedar into the mid palate.

The burn was slightly wavy but never needed any attention. The ash held on in inch and a quarter increments. 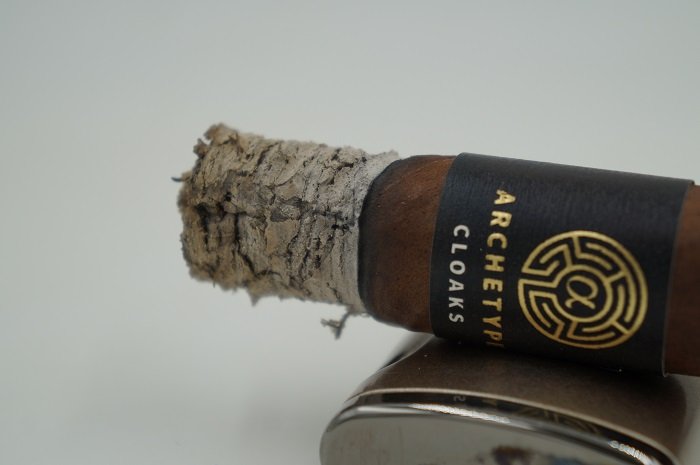 The burn is slightly uneven in the first third. The burn continues uneven, eventually requiring a touch-up. Similar burn profile in the middle third requiring a second touch-up. The burn is relatively straight through the final third with ash holding up to 1-1/2 inches at points.

The first third started well with the combination of musty cedar and spice, but from the second third on, it went downhill as char entered and continued building, knocking out some of the more enjoyable notes. The Ventura Archetype Cloaks Robusto isn’t my favorite offering in the mini-series and likely my least favorite. The char just overpowered the profile. If you smoked and enjoyed the others in the line, it’s worth giving this one a try, it just isn’t something I’d likely return to.

The draw leans toward the resistant spectrum up to a half notch of resistance.

The Connecticut Broadleaf is the clear flavor profile smoking the Ventura Archetype Cloaks Robusto. Flavors of leather, earth, cedar, black pepper, with occasional sweetness, cedar and vegetal notes. I found the flavor experience to be average with the profile missing another component to anchor it together, which would allow it to rise above the core components. Burn profile was very good, and the draw was in the ideal zone of resistance. Total smoking time was 1 hour and 40 minutes.