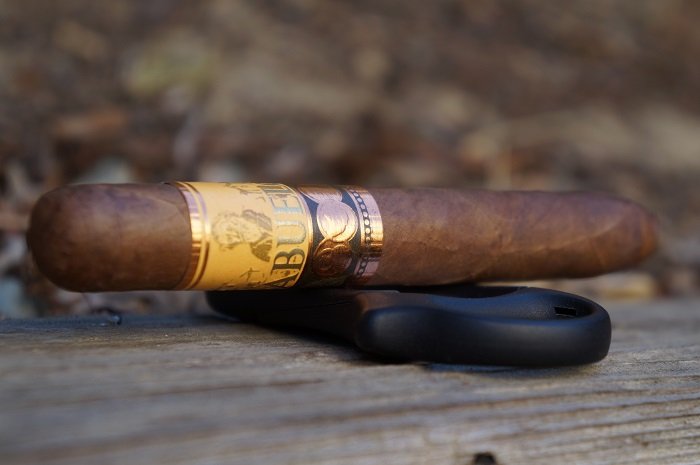 Aaron: The wrapper on the United Cigar Abuelo Nieta is a marbled medium brown and has some raised, knotty veins present. The seams are smooth and the caps are very well finished. The band is orangish yellow, black and copper and denotes the line name. The cigar seems a bit light for its size. The aroma from the wrapper is light, dry wood while the small foot opening brings wood and tobacco sweetness. The pre-light draw brings musty, aged cedar.
Seth: Solid Colorado wrapper with few veins present. Veins present are small in size, and the United Cigar Abuelo Nieta is firm throughout. Rolled well. The cigar delivers a cold draw of tobacco, cedar, leather, spices and earth.
John: The United Cigar Abuelo Nieta comes in cellophane, and has a UPC sticker with an integrated tear point that keeps the UPC intact when the cellophane is opened. The tobacco at the foot appears to have roughly a half inch thick section that is a different shade than the wrapper. For aromas, I was picking up on rich, sweet tobacco and barnyard. The exposed section of the foot was too small to detect anything specific.
Jiunn: The United Cigar Abuelo Nieta has an overall Colorado Claro wrapper shade. Veins are decently pressed, seams tight but visible and head well wrapped. Aromas from the wrapper tell a mixture of cedar and barnyard. Aromas from the tapered foot give the same but with added white pepper. Cold draw tells of Eastern herbal medicine and a slight campfire. 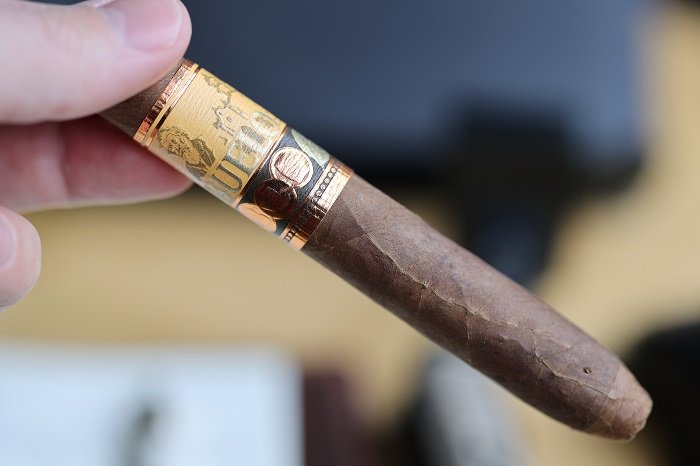 Aaron: The cigar begins with heavily toasted cedar and a mild black pepper. At a half inch in, the toast level mellows a bit and a light mustiness joins the profile. The retrohale is toasted cedar and light black pepper. As the third comes to a close, the toasted cedar is up front, with mustiness and black pepper even a bit behind. The strength in this third was right at medium.
Seth: The first third starts out with cream, cedar, peppery spices and earth. I am picking up some mineral and leather qualities as well, and it is a fairly strong cigar. I would classify the cigar as medium-full in strength and body.
John: The first third begins with sweet baking spices that gives way to musty wood. There is a delayed lingering sweetness between each draw. The flavors are all at the same level of intensity through the retrohale. Some raisin sweetness is present as the first third progresses.
Jiunn: The first third gives plenty of baking spices and cedar. Retrohaling gives some added spicier baking spices. The finish is slightly harsh with burnt cedar. Strength and body is medium. 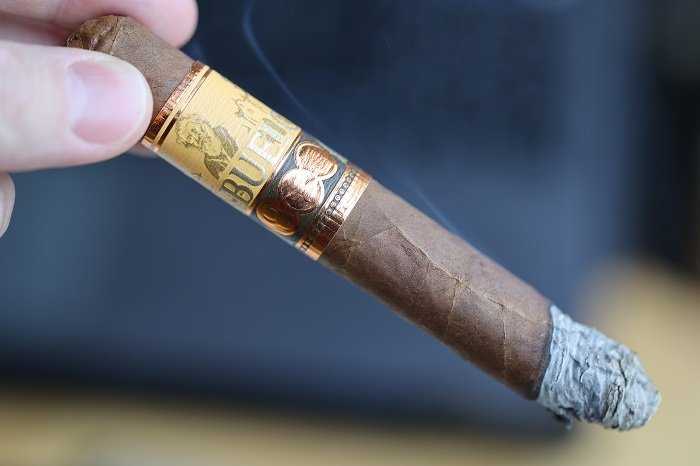 Aaron: As the second third begins, a light, dry earth joins the profile. The retrohale is toasted cedar, dry earth and light mustiness. At an inch in, the black pepper has become pretty faint. The third wraps up with toasted cedar up front with mustiness and dry earth a bit behind. The black pepper is still very faint in the background. Strength remains at medium.
Seth: The second third shows a continuation of the first third. I am picking up cream, cedar, peppery spices and earth. Like before, medium-full in strength and body.
John: Sweet baking spices lead the cigar into the second third with lingering sweetness and wood into the post draw. Some berry sweetness takes up the center but is being pushed aside by a combination of earth and wood. There is some trailing cocoa at the end of each draw as the cigar progresses.
Jiunn: The second third becomes a tad less harsh and unrefined. I’m noticing white pepper taking over the burnt cedar note. Still plenty of baking spices in the mix though. Strength and body continues to be medium. 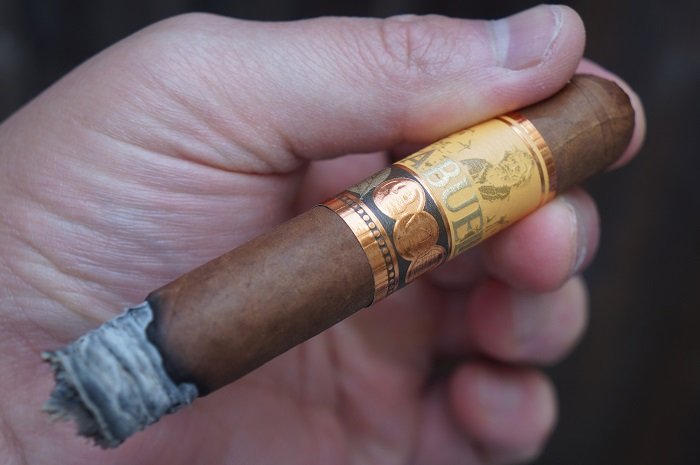 Aaron: As the final third begins, the mustiness is now even with the toasted cedar with the dry earth just behind and the faint black pepper still holding on. The retrohale now has the toasted cedar, dry earth and black pepper all even. At an inch in, the toast level becomes very heavy again. The cigar wraps up with the heavily toasted cedar even with the mustiness and dry earth with faint black pepper in the background. The strength remained at medium.
Seth: The final third was right in line with the first and second third. This cigar went nowhere. Continuous flavors of peppery spices, cedar, cream and earth. I would classify the cigar as medium-full in strength and body.
John: Hay and mild sweetness carry the final third as hay and wood move into the post draw. There is no other transition through the final third.
Jiunn: The final third’s flavor profile shifts to an odd, airy burnt cedar with no traces of baking spices. The finish is the most disappointing part as it’s full of lingering harsh burnt cedar. Strength and body finish the same medium. 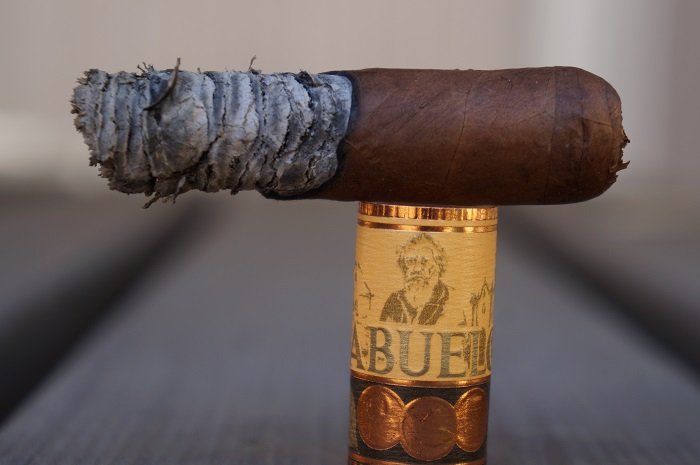 Aaron: The burn line was a bit wavy throughout, but never required any attention. The ash held on in inch and a quarter increments.
Seth: Nice burn throughout.
John: The burn was perfect all the way through with no attention required.
Jiunn: Perfect burn performance. Even burn, solid ashes, ample smoke production and cool burning temperature. 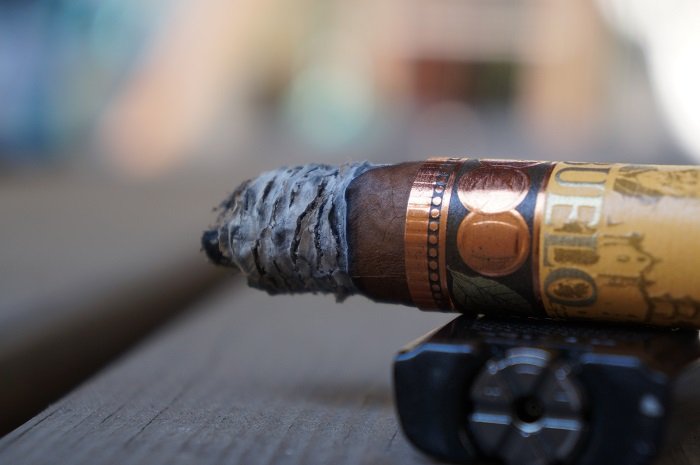 Aaron: The draw was perfect, with just the right amount of resistance that I prefer.
Seth: Loose draw.
John: The draw initially starts out as extremely resistant, 4+ notches which would have resulted in a Subpar rating. Once the burn gets to the half inch mark, it opens to 3 to 3-1/2 notches towards the resistant spectrum, a few more puffs it opens to 2 to 2-1/2 notches into the resistant spectrum resulting in a Good rating.
Jiunn: Perfect draw performance as well, providing the best possible air flow.

Aaron: The flavor profile was focused around toasted cedar, dry earth, mustiness and black pepper. There wasn’t much in the way of transitions, just various levels of the flavors moving around. The United Cigar Abuelo Nieta was fairly average as the flavor profile was unexciting. I’m sure there are many people that would have no problem with the profile presented, but for me it’s something that’s pretty easily found in any number of cigars on the market. I don’t really see myself coming back to this one.
Seth: Average cigar. I am not trying to be mean or negative, but it is an average Honduran puro. Not a great example of Honduran Corojo, but not the worst. I honestly have no idea why United Cigars went down this road. The pricing is too high for the United Cigar Abuelo Nieta. When I was smoking this cigar, I thought of Sans Pareil. Nothing to report on the cigar, negative or positive, but I hope the Eiroa Family is making money off of it like Jochy Blanco is with Sans Pareil. Why did United Cigars think that they needed a Honduran puro? Was there a survey or poll of cigar consumers conducted recently that said consumers are looking for a Honduran puro priced at $10 a cigar?
John: The United Cigar Abuelo Nieta was fairly engaging in the first third, and provided a rather light-plus and approachable smoking experience for the second and last thirds. Overall, it was a pleasant cigar review, even if the complexity of the flavor profile didn’t rise to the category of a Good rating. The only drawback might be that the price point of these versus the vitola size might be challenging in some markets. The burn was flawless and the draw had some resistance to it that opened up as the cigar progressed. Total smoking time was a fairly quick 1 hour and 15 minutes.
Jiunn: From first draw, the United Cigar Abuelo Nieta failed to capture my attention. Lacking depth, and therefore lacking my interest, there was too much spice and earth in baking spices and burnt cedar. Cool tapered shape, but that’s where the excitement basically ended for me.