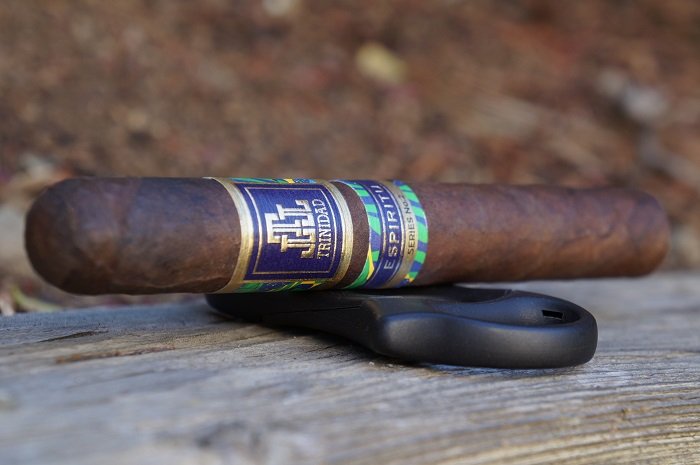 Aaron: The wrapper on the Trinidad Espiritu Series No. 2 Toro is dark brown, but has some color variations throughout. There are a couple of slightly raised veins, otherwise they are well pressed. The seams are very smooth and only visible due to the color variation of the wrapper, while the top cap on the head of the cigar is lifting almost all the way around. There are two bands, with the primary carrying the Trinidad logo and the colors of Brazil. The secondary band has the same color combination and designates this as the second series in the line. The aroma from the wrapper is a mix of dark earth and bakers chocolate while the foot brings fruit cake and light amounts of wood and baking spice. The pre-light draw brings cedar and stone fruit sweetness along with a decent level of spice on my lips.
Seth: I think the coloring of the bands against the wrapper are gorgeous. One of the most beautiful presentations I have seen on a cigar in a long time. Someone pointed out the similarities to the Davidoff Escurio, and I see that, but I think this is done better. If it is an attempted copy, it turned out better. The Trinidad Espiritu Series No. 2 Toro sports a dark maduro wrapper that has some marbled coloring between maduro and oscuro. It is silky in texture and there is this oily quality present as well. The aroma on the foot is that of rich earth, spices, tobacco, fruits and pepper, while the wrapper is giving off notes of manure, earth and wood.
John: The Trinidad Espiritu Series No. 2 Toro comes in cellophane, and has a UPC sticker holding it closed, which tears in half when the cellophane is opened. The cigar is double banded, and the secondary band indicates “Espiritu Series No. 2”. Aromas from the wrapper included a musty sweetness, cedar and general tobacco notes. From the foot, I was able to pick out sweet raisin and wood.
Jiunn: The Trinidad Espiritu Series No. 2 Toro has an even fine grit sandpaper like maduro wrapper shade. Veins are well pressed, seams tight, bunch and roll even and head well wrapped. Aromas from the wrapper give white pepper and cedar. Aromas from the foot tell deeper white pepper and cedar. Cold draw gives biscuits and cedar shavings. 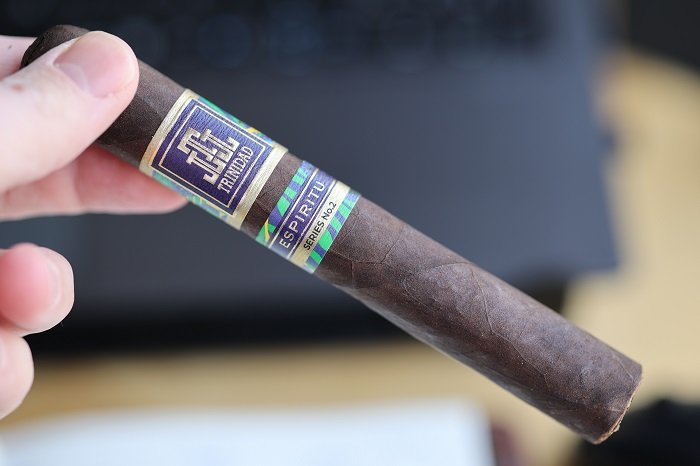 Aaron: The cigar begins with a heavy, dark wood and baking spice. At a quarter inch in, some mustiness joins the profile. The retrohale is musty dark wood. At an inch and a quarter, a bit of meatiness has joined the profile as the smoke is dense and chewy. The strength in this third was right at medium.
Seth: The first third opens with rich earth and strong spice notes. There is this creamy aspect present as well, and I am getting some blueberry jam qualities. The spice notes are showing cinnamon and black pepper, and the earth notes have some baking chocolate qualities. Hazelnut flavors present as well. In terms of strength and body, I would classify the cigar as medium-full.
John: My first third experienced was sweetness, coffee and a trailing leather and cedar into the post draw. Some medium strength baking spices settled into the retrohale a few puffs in. A light plus chocolate joins the retrohale but is lost in the rest of the flavors.
Jiunn: The first third is highly earth driven. Gritty dirt, leather, minerals, cedar, sweetness and creaminess from nuts. The earthiness really drives it home on the finish, being very lengthy. Retrohaling breaks away from the earthiness, as it gives a combination of white pepper and dried nuts. Strength and body is medium. 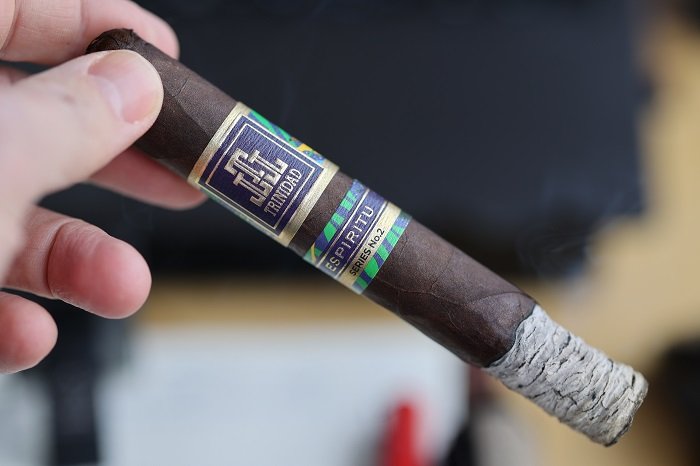 Aaron: As the second third begins, the dark wood remains up front with the mustiness just behind. The meatiness is in the background and the baking spice has transitioned to a dull black pepper that is also in the background. The retrohale remains musty dark wood. At an inch and a quarter, the profile is becoming a bit dry as the wood is taking on a slightly stale note. At an inch and a half, some dry earth joins the profile. The strength in this third remained at medium.
Seth: The blend loses the complexity in the second third and I am left with a flavor profile that revolves around dry earth, metallic notes, dry wood, tobacco and spice. I am getting lots of black pepper notes, and there is nothing sweet and rich to balance out the sharp and dry flavors. In terms of strength and body, the cigar is still smoking around that medium-full level.
John: A stewed fruit sweetness, with raisin and baking spices takes the cigar into the second third, finishing with wood and light leather into the post draw. That wood moves into the center of the profile and brings with it citrus accents. As the second third reaches the halfway point, chocolate joins the retrohale.
Jiunn: Some minor changes happening in the second third. The sweetness and creaminess of dried nuts is swapped for black pepper spice. But it’s still an overall earthy cigar with gritty dirt, leather, minerals and cedar. Strength and body remains medium. 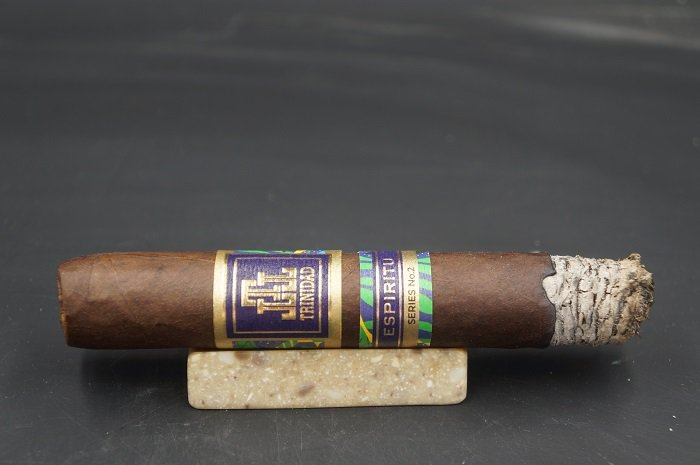 Aaron: As the final third begins, the dry earth increases quite a bit to become even with the dark wood up front. At a half inch in, the dull black pepper is pretty faint. The retrohale remains musty dark wood. At an inch in, the cigar has warmed up and the dark wood has now gained some char. The heat really builds up as the cigar finishes. The char has picked up and some mintiness has joined the profile. The strength in this third bumped up to slightly above medium.
Seth: The final third delivers a profile of rich earth and strong spices. Red and black pepper notes are present, and I am getting some cocoa powder qualities with that. There is this mocha quality, so I am getting some cream and espresso notes as well, but it revolves around the rich earth and spice flavors. Like before, medium-full in strength and body.
John: The final third consisted of baking spices, and a tannic accent. Chocolate and espresso added some complexity after a few puffs, with the tannins building to medium strength. By the time the cigar had settled in, medium strength earth was driving the profile.
Jiunn: The final third is a continuation of the second third. Still gritty dirt, leather, minerals, cedar and subtle black pepper spice. Strength and body finishes the same medium. 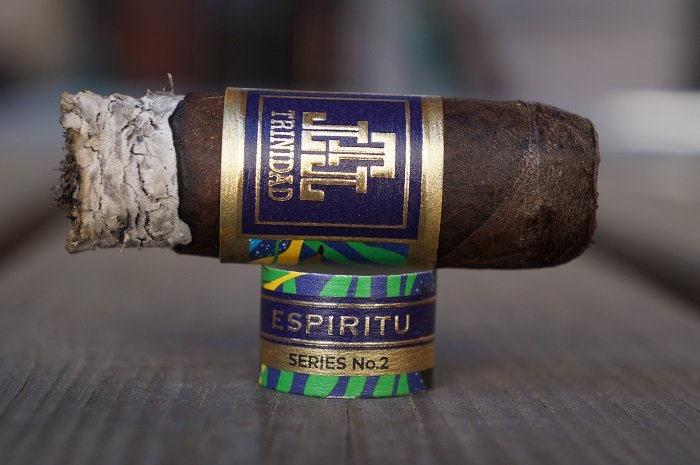 Aaron: The burn was a bit wavy at times and the cigar went out twice, requiring re-lights.
Seth: Great burn from start to finish.
John: The burn was as picture perfect as it gets. Straight throughout the review with the ash holding on up to 2 inches before I knocked it off to avoid wearing it.
Jiunn: When AJ makes a cigar, it is nothing short of a perfect burn. 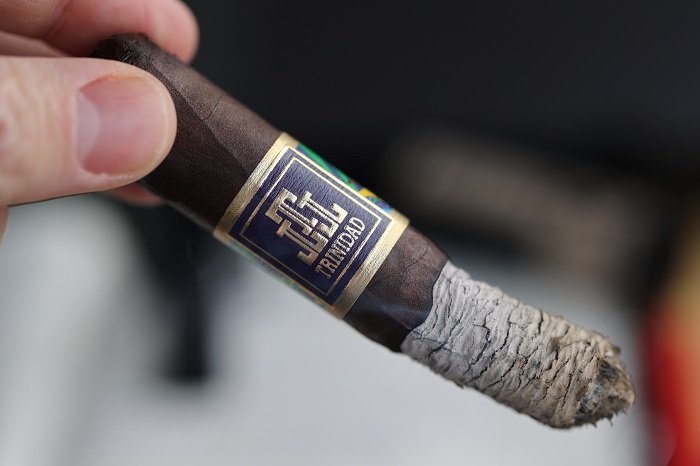 Aaron: The draw was pretty snug throughout and a draw tool only brought short bursts of minor relief.
Seth: Nice level of resistance throughout. Well made cigar.
John: The draw had some resistance to it, roughly 2-1/2 to 3 notches into the resistant spectrum.
Jiunn: When AJ makes a cigar, it is nothing short of a perfect draw.

Aaron: The flavor profile was on the darker side with the dark wood and later dry earth joining in. The tight draw probably led to the cigar heating up towards the end with more deliberate draws needed to generate sufficient smoke production. I know there’s a lot of people that like this darker profile, but for me, with this cigar, it was a bit too mundane with the dryness and not providing any other supporting components to make the profile pop. It’s worth a try to see how it fits your profile, but I don’t really see myself returning to the Trinidad Espiritu Series No. 2 Toro.
Seth: The Trinidad Espiritu Series No. 2 Toro is an average cigar. I like that they really embraced the Brazilian tobacco in the blend, and you can pick up the flavors with the Nicaraguan tobacco. I would have liked for it to show some more Brazilian qualities, but if not, then less Nicaraguan dominance. I would have loved to have some Mexican tobacco in the blend. At times, the cigar is rich, but for the most part it is earthy and spicy from start to finish. Nice follow up to the 2019 Trinidad release, but nothing special. Great packaging.
John: I enjoyed smoking the Trinidad Espiritu Series No. 2 Toro. While the cigar wasn’t necessarily as complex as I would want, the flavors that were present were enjoyable, and harmonized in a way that kept me engaged. The burn was absolutely perfect, and the draw had a small amount of resistance to it. I would smoke the Trinidad Espiritu Series No. 2 again if I had the opportunity. Total smoking time was a brisk 1 hour and 27 minutes.
Jiunn: Another month goes by, another AJ comes by. The Trinidad Espiritu Series No. 2 Toro is yet again another classic AJ blend being highly earth forward with gritty dirt, leather, minerals, cedar and subtle black pepper spice. It seems like AJ is like the Starbucks of coffee. As in, perfectly consistent in great construction and the same set of overall flavors. So if you appreciate consistency in cigars, this is no doubt one of the many AJ’s you can enjoy.