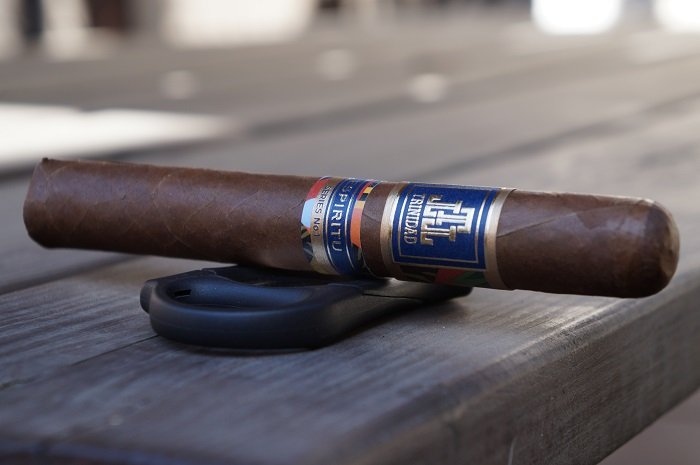 The Trinidad Espiritu Series No. 1 Toro wrapper is between light and medium brown and has some raised veins present that carry a slightly lighter color. The seams are easily visible due to the vein placement and the head is finished off with a well applied double cap. There are two bands with the primary carrying the brand logo with the colorful mixture behind it that represents this line. The secondary band has the same background and designates the line as well as denoting that this is Series No. 1. The aroma from the wrapper is all about barnyard with hay and leather being some of the prominent notes. The foot brings more leather along with a fair amount of white pepper. The pre-light draw brings sweet wood and leather along with a pronounced spiciness on my lips. 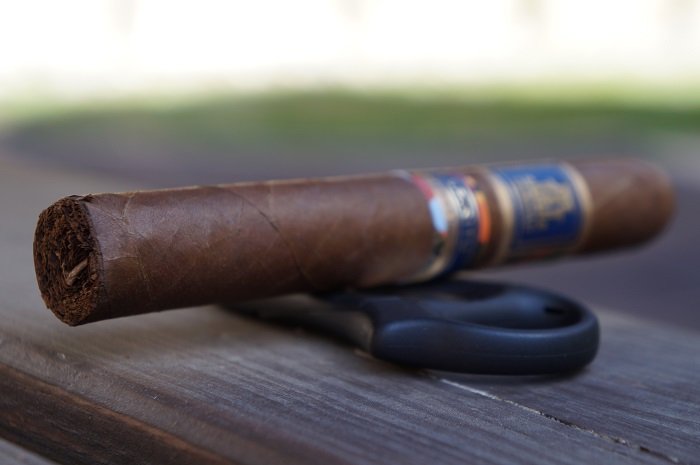 The Trinidad Espiritu Series No. 1 Toro is solid in hand and has a nice Natural colored wrapper with touches of Colorado as well. It is slightly rough in texture, nothing major, and has a small bit of tooth present with that. The aroma on the cigar is that of spices, stone fruit and earth, and I am getting that off the wrapper and foot. 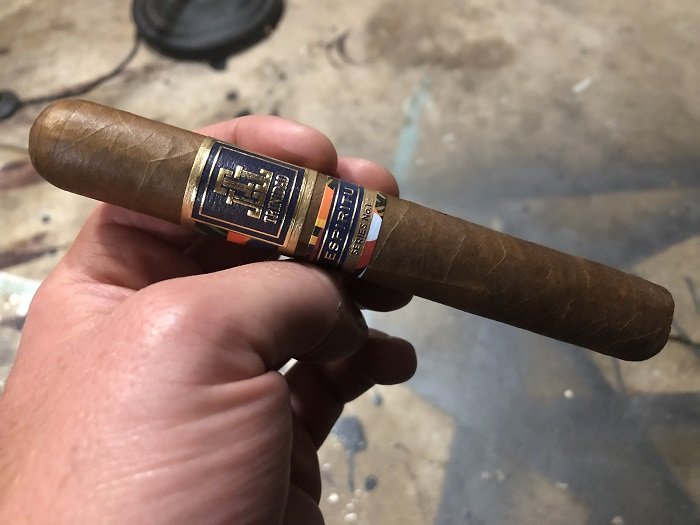 The Trinidad Espiritu Series No. 1 Toro has a dark wrapper with firmly pressed veins visible throughout. The cigar has a primary and secondary band, with a uniform style. The color scheme is gold on black, with gold accents, and the main area of the band having colorful artwork. The secondary band indicates ‘Espiritu Series No. 1’. Nosing the wrapper, I get sweet leather with baking spices, and pepper underneath. Light stewed raisin aromas are present in the foot. 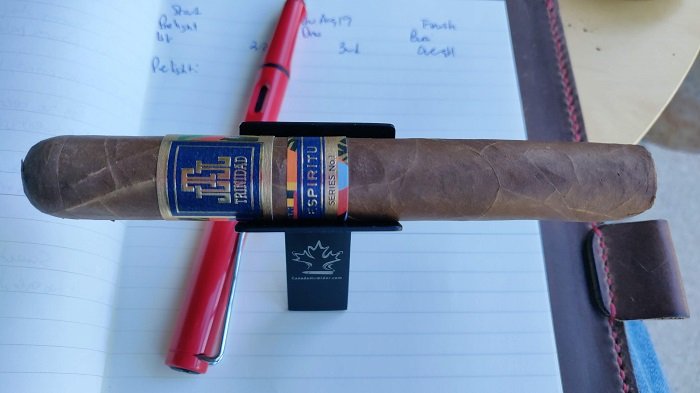 The cigar begins with a combination of wood, cinnamon and cream. At a quarter inch in, the cinnamon has morphed into a baking spice that is quite aggressive while the wood and cream are behind it. At three quarters of an inch in, the baking spice comes back to the pack and is even with the wood and cream. The retrohale is musty wood with a light baking spice. At an inch and a half, the cream has transitioned to mustiness and is paired up with the wood up front while the baking spice is now slightly behind. As the third comes to a close, the mustiness is up front with wood slightly behind and the baking spice is faint in the background. The strength in this third was right at medium. 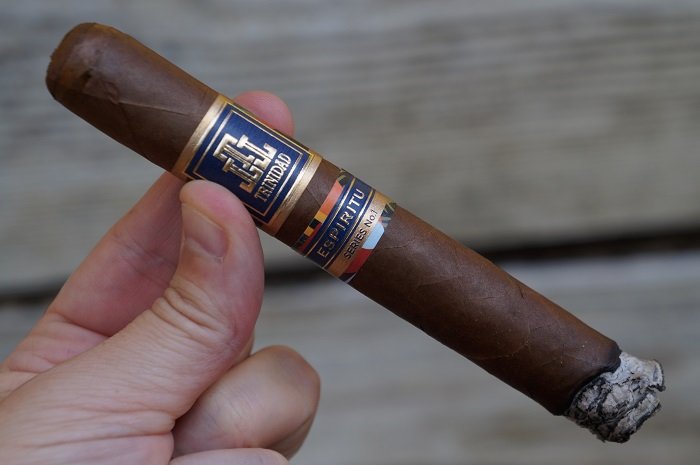 The first third begins by delivering some quality barnyard flavors and with that are some red pepper spices. I am getting touches of stone fruit as well, and there are some Asian spice and earth on the finish. I am really getting these lovely anise notes on the finish. I would classify the cigar as being medium-full in body, and the same foes for the strength and flavors. 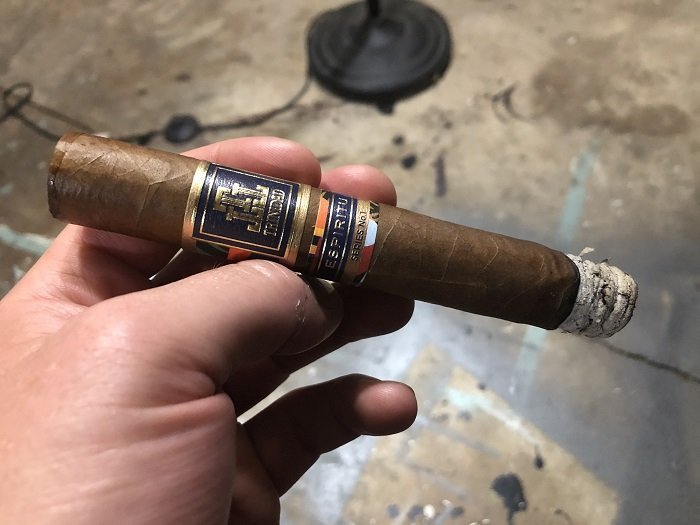 My initial flavor impressions are graham cracker with a light trailing pepper on the tip of my tongue. Post draw leather develops almost immediately. The pepper intensity diminishes rapidly to medium, maybe medium plus. Earth and chocolate come through as the first third settles in. By the 30 minute mark, pepper has receded to light, with light leather on the post draw. A graham cracker and cedar combo really defines the profile by this point. Cedar joins the post draw in the bottom half. 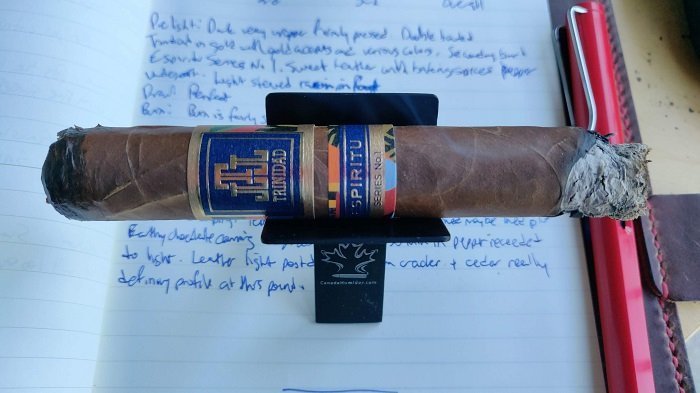 The second third continues on with the mustiness up front and some dry earth joining in with the wood just behind it. The baking spice is very faint in the background. At a half inch in, the wood, mustiness and dry earth are all at equal levels while the baking spice has left the profile. The retrohale consists of musty wood. As the third comes to a close, the wood and mustiness are up front with the dry earth right behind. The strength in this third dropped to slightly below medium. 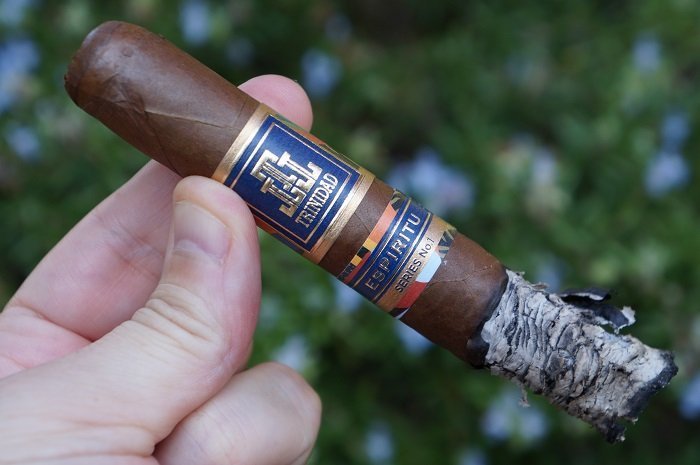 As I enter into the second third of the cigar, I am seeing a slight demise in the complexities present, and the cigar focuses on spices, barnyard, tobacco and earth notes. The cigar is still smoking around a medium-full level, and that goes for body, strength and flavors 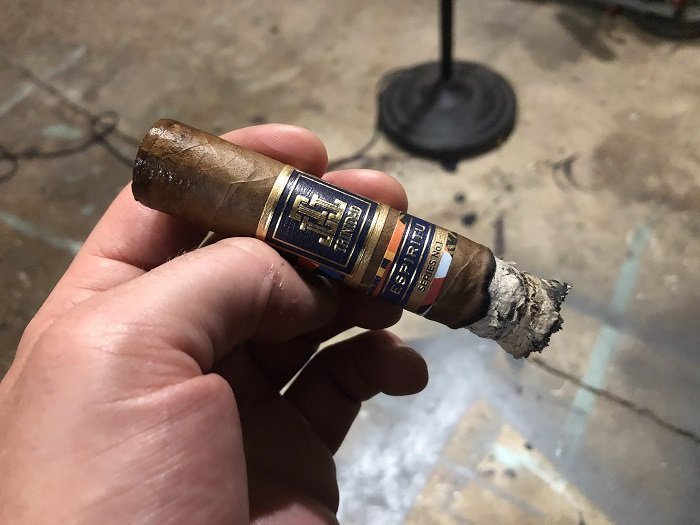 Cedar carries the profile into the second third. Some tannins join the post draw as the cigar settles in. Some creamy sweetness on the retrohale. No other evolution through the second third. 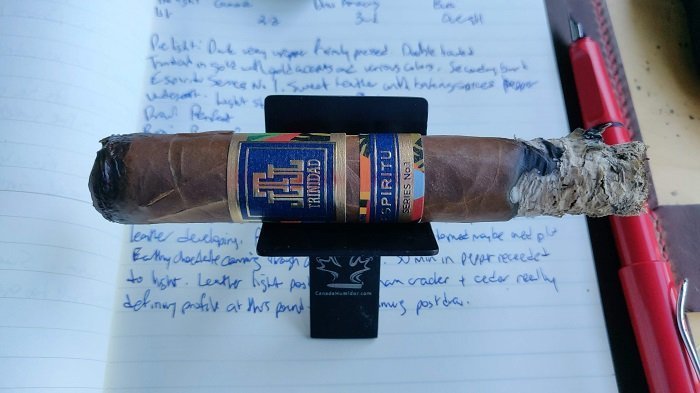 As the final third begins, it continues on with the musty wood up front and dry earth slightly behind. At a half inch in, some slight char and bitterness join the profile. The retrohale maintains the musty wood profile. At an inch in, the char and bitterness pick up a bit. As the cigar comes to a close, it begins to heat up, bringing a slight mintiness to the profile of musty and slightly charred wood and bitterness. The strength in this third bumped back up to medium. 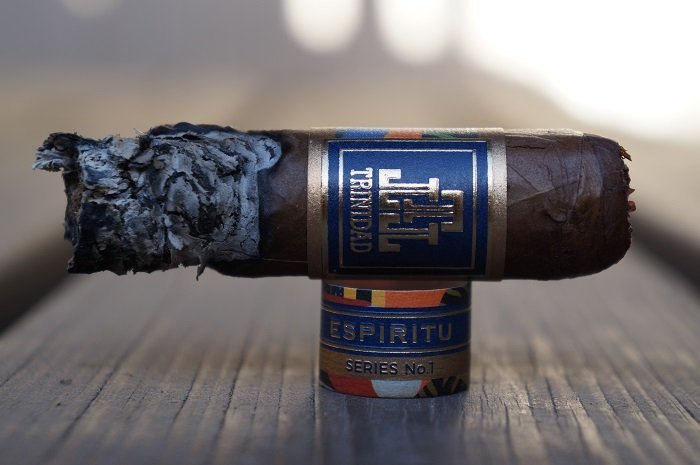 I am in the final third of the cigar now and finding that it is showing a demise in flavors, similar to what happened between the first and second. I am picking up spice notes, mostly red pepper and anise, and with that is some dry earth and seasoned wood notes. The body and strength are smoking around a medium level now, and the same goes for the flavors delivered. 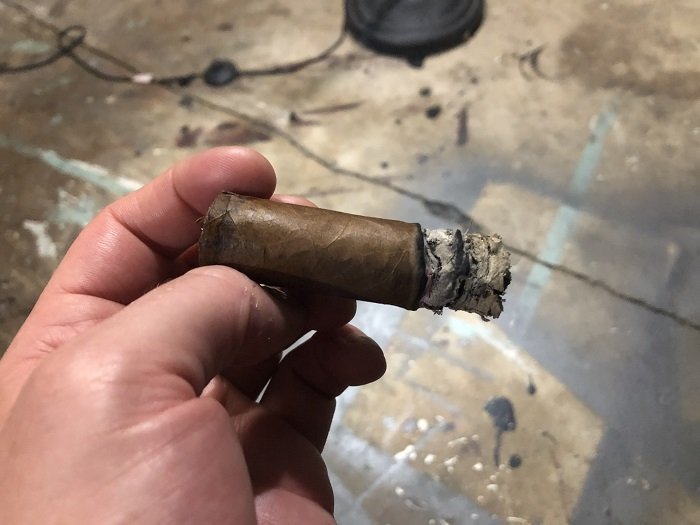 The profile is similar to the second third here. Cedar is the primary flavor driver with light leather on the middle of the profile. Some baking spices return at the halfway point of the third. 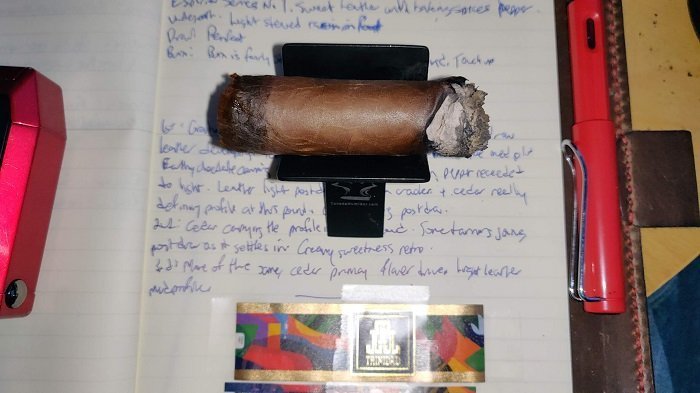 The burn line was fairly wavy throughout. It required one touch-up and one re-light. The ash held on in inch and a quarter increments. 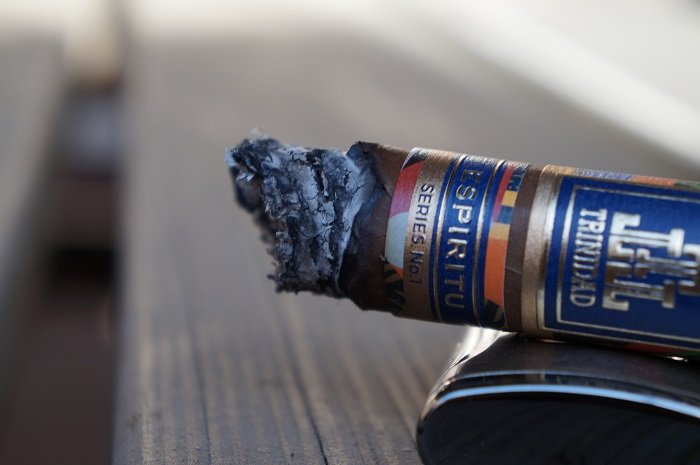 The burn was very good from start to finish. While it was never razor sharp, there were never any problems and it smoked consistently throughout. The ash was light and did not hold on very well for me, but there were really no problems present with the actual smoking experience.

The burn was fairly straight with up to an inch and a half ash holding on. 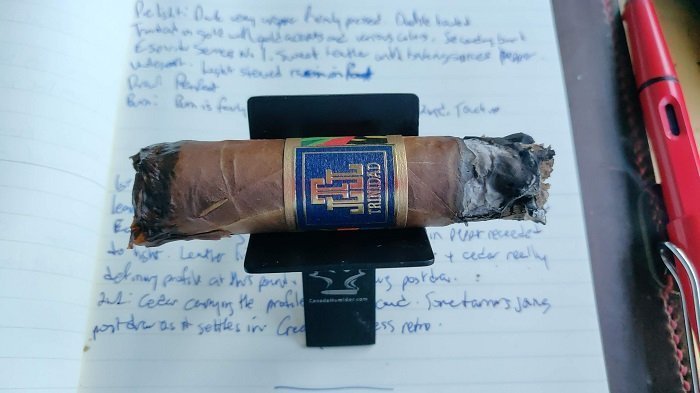 The cigar began with wood, cinnamon and cream and shortly thereafter the cinnamon was an aggressive baking spice that quickly mellowed. The cream then transitioned to mustiness as some dry earth joined the profile. Some char and bitterness joined in the final third. The Trinidad Espiritu Series No. 1 Toro started out fairly well, but by the middle of the first third became fairly average. Some sweetness would have really rounded out the profile, but there was none to be found. I could see this cigar appealing to the masses as it ticks a few boxes, but for me the cigar needs something more. It would work well in a pairing, but on it’s own, it’s not something I’d likely return to.

The draw on the cigar was perfect. This cigar smoked so well from beginning to end. I couldn’t ask for any more from the cigar.

Overall, the Trinidad Espiritu Series No. 1 Toro was disappointing. It had a great start, and if it continued to smoke like that throughout it would have done very well, but that was not the case. It went downhill with each third and that really hurt the overall smoking experience. While it may not have shown a great bit of complexity and transitioning if it smoked like it did in the first third from start to finish, it would have produced a far superior smoking experience to what was delivered. I thought that maybe this would be the release to turn the Trinidad brand around, but that was not the case. Fantastic packaging with a mediocre blend.

The draw is perfect, right in the ideal zone of resistance.

The Trinidad Espiritu Series No. 1 Toro started out quite promising in the first third. Flavors of graham cracker, pepper, leather, chocolate and cedar combined to make an enjoyable experience. Unfortunately, the second and last thirds lacked the same flavor complexity, resulting in an overall average experience. Total smoking time was 1 hour and 54 minutes.