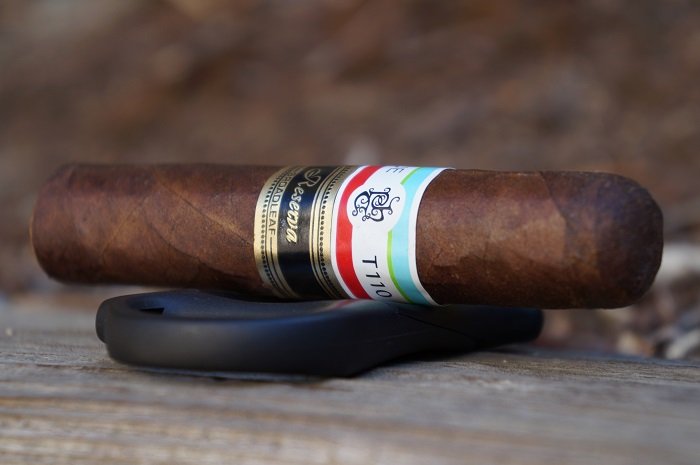 Aaron: The wrapper color on the Tatuaje T110 Reserva Broadleaf is between medium and dark brown and has some marbling to it along with a network of lightly raised veins. The seams are pretty smooth and the caps are well applied. The cigar seems fairly light for its size. There are two bands, with the primary being white, red, sky blue and lime green and denoting the company and line name. The secondary band is black and gold and denotes the sub line. The aroma from the wrapper is a very faint mix of wood and earth while the foot brings a fuller version of the same combination. The pre-light draw is a mix of cedar and slightly sweet black tea along with a mid-level spiciness on my lips.
Seth: The Tatuaje T110 Reserva Broadleaf is finished with a classic Maduro wrapper in terms of coloring, and it has a chocolate brown finish. There are few veins present and the cigar is smooth and oily throughout. The wrapper produces aromas of rich earth, leather and manure, while the foot is giving off additional sweet spice notes.
John: The Tatuaje T110 Reserva Broadleaf is double banded, and does not come in cellophane and as such there is no UPC sticker. Aromas from the wrapper include baking spices and wood. Out of the foot, there was mild tobacco, hay and wood.
Jiunn: The Tatuaje T110 Reserva Broadleaf has a proper maduro broadleaf wrapper. Veins are well pressed, seams tight, bunch and roll even and head well wrapped. Aromas from the wrapper tell white pepper and game. Aromas from the foot gives the same white pepper and faint dry barnyard. Cold draw tells namely cedar. 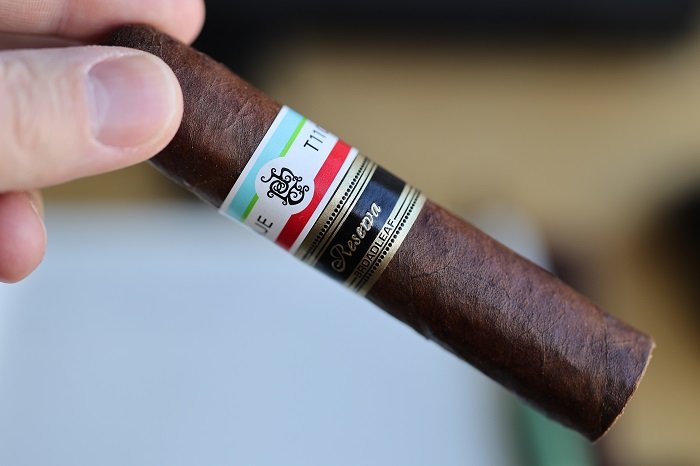 Aaron: The cigar begins with toasted cedar with some black pepper a bit behind. At a quarter inch in, some dry earth joins the profile. The retrohale is toasted cedar along with a black pepper zing. As the third comes to a close, the toasted cedar is up front with the dry earth and black pepper just a bit behind. The strength was right at medium.
Seth: The first third begins with some leather, rich earth and damp wood notes. There are faint spice qualities present as well, and the cigar is smoking around the medium level for strength and body. Underwhelming first third.
John: The first few puffs, I was tasting creamy wood, with a mild lingering wood that carries into the post draw. Light baking spices, along with earth and creamy wood make up the retrohale. Some lingering mild pepper develops on the post draw. As the cigar progresses, citrus comes through the center of the profile. Chocolate starts to develop on the retrohale near the 10 minute mark. That chocolate becomes more defined as a powdered cocoa through the first third.
Jiunn: The first third gives a thicker, medium plus body, compounded by medium strength. The flavors consist of mainly cocoa and game/meat. Retrohaling gives a nice mixture of tart cherries and baking spices. The finish is lacking, as it’s short with just some spicier cedar. 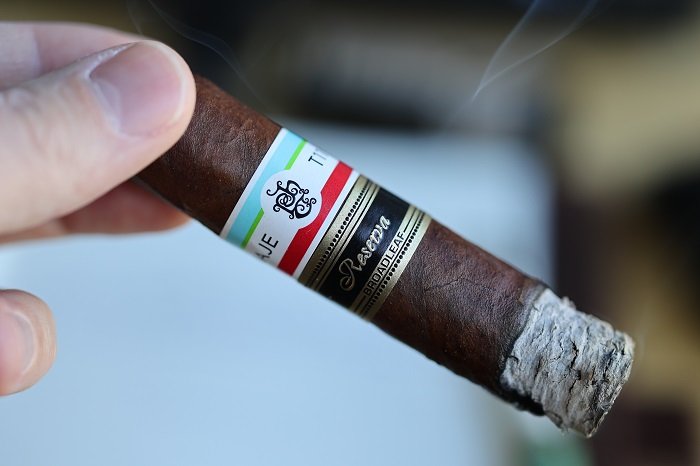 Aaron: As the second third begins, the toasted cedar and dry earth are even, while a light mustiness has joined in and is even with the black pepper. At a third of an inch in, the toast level becomes pretty heavy. The retrohale is now toasted, slightly stale cedar and dry earth. As the third comes to a close, the mustiness is now even with the toasted cedar and dry earth while the black pepper is in the background. The strength remained at medium.
Seth: The second third delivers a continuation of the flavor profile present in the first third. I am picking up damp wood notes and they are paired with rich earth and cocoa qualities. I am picking up those sweet spices and the cigar is smoking around a medium level in strength and body.
John: The powdered cocoa from the first third carries the profile into the second third. Some wood takes up the center of the profile, with trailing earth into the post draw. The earth builds in strength as the second third settles, and combines with the wood through the middle of the profile. Leather fights back for the lead of the profile nearing the end of the second third.
Jiunn: The second third shifts slightly away from the cocoa and game/meat combination and highlights more baking spices and minerals. The enjoyment factor however does not change. Strength and body is still medium and medium plus. 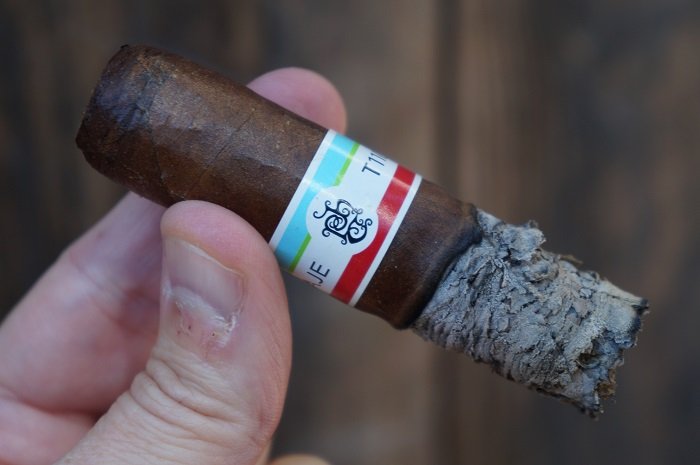 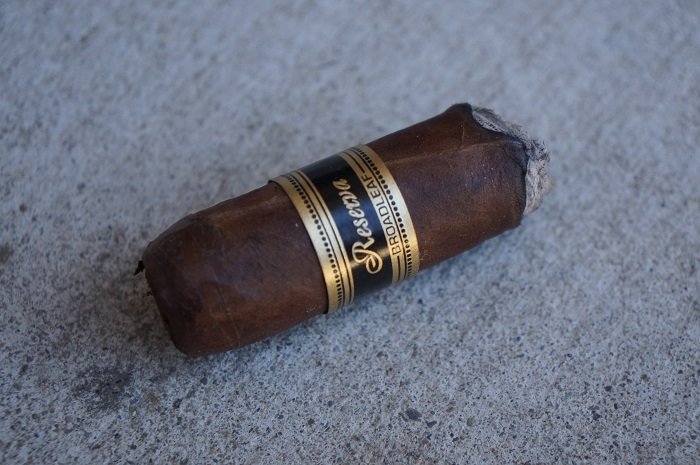 Aaron: The burn was a bit wavy throughout and the cigar went out once in the first third, requiring a re-light.
Seth: Great burn and construction throughout.
John: The burn was fairly straight for most of the review, with the wrapper having unburned pieces through the second third, eventually requiring a touch-up to correct.
Jiunn: Aside from a pretty major uneven burn within the first third, the cigar had no issues with the burn. Overall, cool burning temperature, ample smoke production and tight ashes. 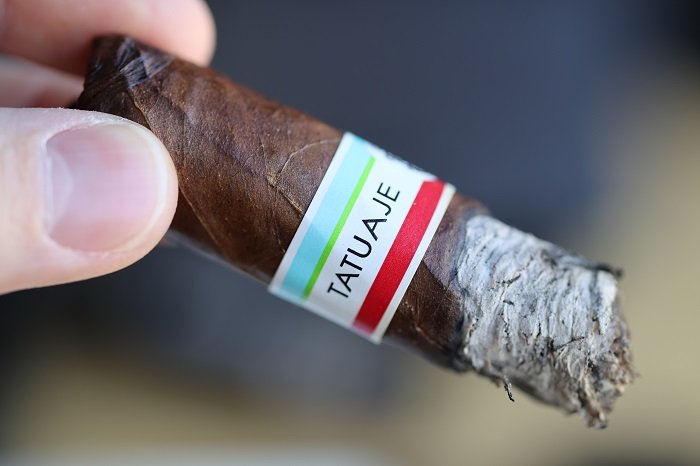 Aaron: The draw was a bit loose through the first third but got right to where I wanted it after that.
Seth: Amazing draw.
John: The draw was 1/2 to 1 notch towards the open spectrum, which puts it in the range of an ideal draw.
Jiunn: The draw was perfect, giving the ideal resistance and air flow.

Aaron: The flavor profile felt a bit hollow through the first third, which coincided with a loose draw, but settled in at the start of the second third. The profile was focused around musty, toasted cedar, dry earth and black pepper. Not much in the way of transitions. The Tatuaje T110 Reserva Broadleaf brought a flavor profile that didn’t really showcase the richness that Broadleaf typically brings. I’m not sure if there was a construction flaw that led to the experience I had, so I’m interested in the experience the others had. Based on what their experiences are will determine if I return to this cigar.
Seth: I found the Tatuaje T110 Reserva Broadleaf rather disappointing. I was expecting the Reserva offering to be the best or second best of the three offerings, but I found it to rank the third when looking at all offerings delivered. There was no transitioning from beginning to end, and I found the overall complexity lacking. Solid medium strength and body cigar from beginning to end though with terrific construction. Lacking in those qualities to make it great, and really lacking in those qualities to make it a solid and consistently good smoking experience.
John: The Tatuaje T110 Reserva Broadleaf was surprising, as I was expecting a bold and in your face blend. Instead, what I got was a nuanced and more medium strength blend that did a respectable job of highlighting some cocoa and earth flavors throughout. The draw was perfect, and the burn only required a single touch-up in the second third. I would smoke these again. The format is nice and it’s an interesting departure from many of the bolder Broadleaf blends in the market. Total smoking time was 1 hour and 35 minutes.
Jiunn: The Tatuaje T110 Reserva Broadleaf essentially tells me what I already know about Tatuaje. That is, Pete continues to do a fine job of using Connecticut broadleaf, highlighting nice chocolate tones and not making it overwhelmingly earthy. Not his best Connecticut broadleaf by any means, but this is a buy without hesitation.