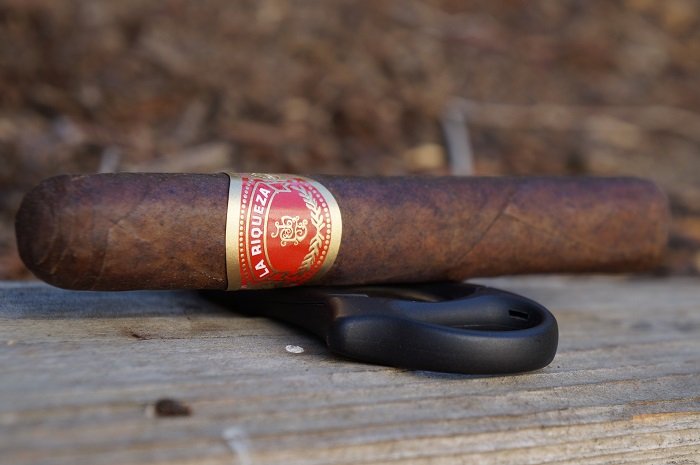 Aaron: The wrapper on the slightly pressed Tatuaje La Riqueza SE 2022 is marbled medium brown with a network of lightly raised veins and a fine toothiness. The seams are smooth, the caps have some lifting edges and the foot is covered with excess wrapper that is folded over. The band is the traditional red and gold design for the brand with no designation that this is a special edition. The aroma from the wrapper is damp earth and a light woodiness while the covered foot brings an even mix of those two components. The pre-light draw brings airy cedar and light earth along with a mild spiciness on my lips.
Seth: Finished with a nice cap and closed foot, the Tatuaje La Riqueza SE 2022 has colors ranging from light Maduro, almost Natural, to Maduro. It doesn’t have that marbled appearance, but dramatic change from one section of the leaf to the other. Rough and firm in hand, the cigar has a lot of veins. Aromas of rich earth, minerals, spices, leather and damp wood. Roasted coffee as well.
John: The Tatuaje La Riqueza SE 2022 comes in cellophane and does not have a UPC sticker. Additionally, the cigar has artisanal complications of being box pressed along with a closed foot. The cigar has a single La Riqueza band with Tatuaje on the sides. Aromas from the wrapper included sweet cereal, and faint, dry wood. From the closed foot, all I could pick up on was sweet tobacco.
Jiunn: The Tatuaje La Riqueza SE 2022 has a cross between Colorado Maduro to Maduro wrapper shade. Veins are very well pressed (especially for Connecticut Broadleaf), seams tight, bunch and roll firm and head well wrapped and capped. Aromas from the wrapper tell of ample barnyard and dried red pepper spice. Aromas from the foot give the same, but with increased spice. Cold draws reveal mixed nuts and hay. 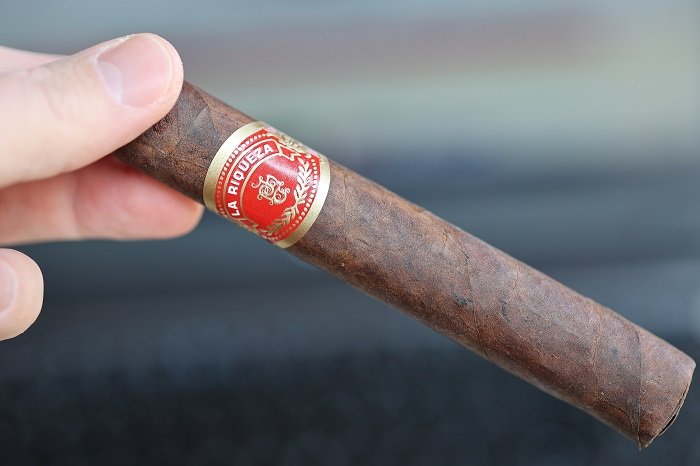 Aaron: The cigar begins with oak, earth and light cocoa powder. At a half inch in, a toastiness joins in that encompasses the oak and earth. At three quarters of an inch in, a decent level of black pepper joins in. The retrohale is toasted oak, earth and black pepper. At an inch and a quarter, the cocoa powder transitions to a light chalkiness. As the third comes to a close, the toasted oak and earth are even up front, with the black pepper a bit behind and a light chalkiness in the background. The strength was slightly below medium.
Seth: The first third starts out with strong coffee notes that are paired with some damp wood, earth, leather, minerals and black pepper. Medium to medium-full in strength and body.
John: The first few puffs I’m tasting general sweet wood, with trailing red pepper flake into the post draw. Some creamy, mild chocolate develops on the retrohale, along with earth and pepper flake that combine into the post draw. The baking spices become more defined on the retrohale with an earthy nutmeg quality. As the first third progresses, the red pepper flake reduces in intensity to light strength. Moving towards the halfway point, some mild leather joins the post draw. Some salty accents are present by the halfway mark.
Jiunn: The first third shows a medium-full body and medium strength profile. Flavors consist of barnyard dankness, roasted chestnuts, baker’s chocolate and a hint of dried red pepper spice. Retrohaling highlights more dried red pepper spice and gives way to cedar wood. The finish has lingering cedar tannins. 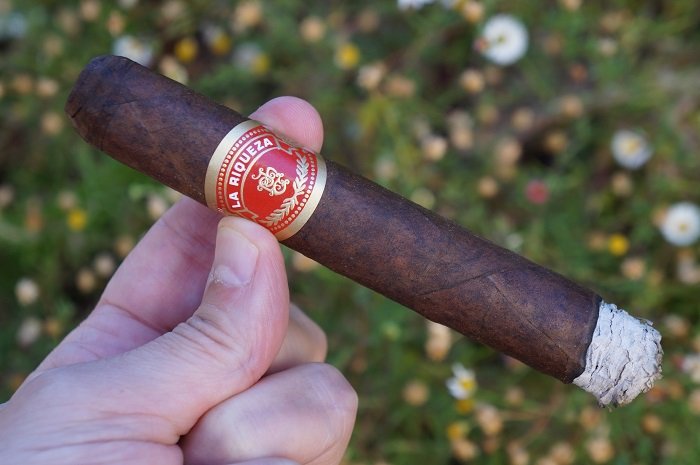 Aaron: As the second third begins, the black pepper is now pretty mellow. At a half inch in, the profile has become a bit dry. The retrohale is now musty, toasted oak and earth. At an inch in, the mustiness makes its way to the mouth draws. As the third comes to a close, the profile is musty, toasted oak and earth up front with black pepper and chalkiness in the background. The strength in this third bumped up to medium.
Seth: The second third is fairly in line with the first. Mineral notes with bits of leather, wood, earth and coffee. Medium to medium-full in strength and body.
John: The second third opens with leather and salty wood. There is some underlying tobacco sweetness to the core profile as it settles in. Earth joins the finish as the cigar progresses towards the halfway mark.
Jiunn: The second third has a pervasive bitterness to the cedar wood. The other flavors of barnyard dankness, nuts and baker’s chocolate are still there but it’s all overcast by the bitter cedar. Strength and body remains medium and medium-full, respectively. 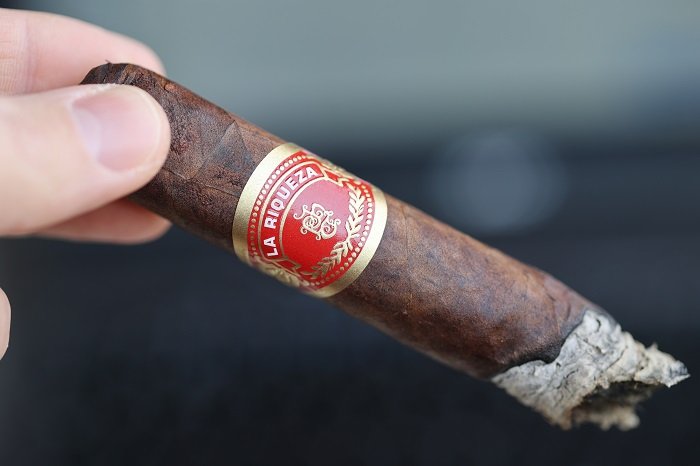 Aaron: As the final third begins, the toast level picks up a bit. At a third of an inch in, a vegetal note joins the profile. At a half inch in, the mustiness increases. The retrohale is now musty, toasted oak, earth, black pepper and the vegetal note. As the cigar wraps up, the profile is musty, toasted oak and dry earth up front with the vegetal note in the middle and black pepper in the background. The strength bumped up to slightly above medium.
Seth: Lots of mineral and pepper notes in the final third. Overpowering the coffee, earth, leather and wood qualities. Medium-full in strength and body. Lacking in complexity. Not balanced.
John: The initial flavor impressions in the last third are toasted, dark chocolate, with earth and dry wood combining to finish the draw. As the last third progresses, the earth profile from the post draw starts to define the post draw at medium strength. By the halfway point, earth and a heavy dryness. In the bottom half, the cigar is starting to heat up, getting some mild bitterness.
Jiunn: The final third shows no improvement of the pervasive cedar wood bitterness and tannins. This note continues to drown out the goodness of barnyard dankness, nuts and baker’s chocolate. Strength and body finishes the same medium and medium-full. 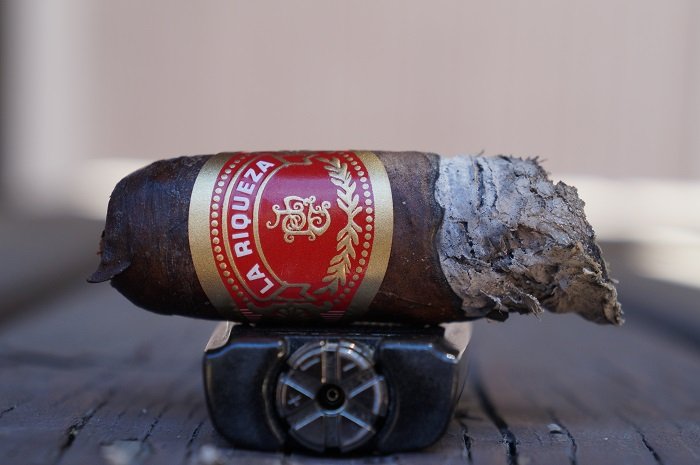 Aaron: The burn was a bit wavy throughout, but always self corrected. The ash held on in inch and a half increments.
Seth: Beatufiul burn throughout.
John: The burn starts out uneven in the first, self-correcting. The burn was uneven in the second third, but self-corrected. The burn was uneven in the last third, requiring a touch-up. The cigar went out in the last third as well, requiring a re-light.
Jiunn: Burn performance was overall solid. The only issue was when the cigar completely went out within the second third. Aside from that, ashes were solid, burn temperature was cool and ample smoke production. 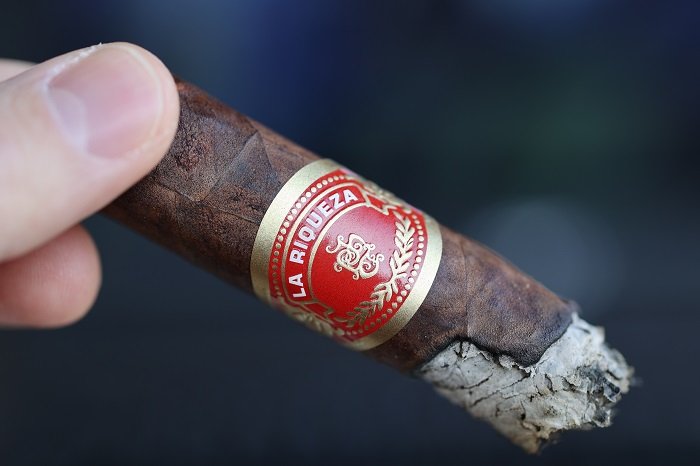 Aaron: The draw was slightly tighter than I prefer, but didn’t cause any issues with the smoking experience.
Seth: Great draw.
John: The draw was a minor amount into the resistant spectrum, roughly 1-1/2 to 2 notches. That still qualifies it as a near perfect burn at very good.
Jiunn: Draw performance was perfect, giving the ideal air flow and resistance.

Aaron: The cigar began with oak, earth and light cocoa powder. Some toastiness joined in fairly quickly and some black pepper a bit later. The cocoa later transitioned to chalkiness. The second third became a bit dry and some mustiness joined in. The final third saw a vegetal note join in and build up. The Tatuaje La Riqueza SE 2022 had a nice start, but once the cocoa transitioned to chalkiness and the profile became a bit dry, it dropped a level and maintained that the rest of the way. Overall, not a profile I found all that exciting and not something I’ll likely return to.
Seth: Here I am praising Tatuaje in 2022, and then I review this Tatuaje La Riqueza SE 2022. I thought it was lacking throughout. Complexity and quality of flavors.There was no balance. It felt like the cigar was lost, and it didn’t know which direction it wanted to go. Great burn and draw, but in the end that means very little. Yes, I would give the cigar another shot, but it’s just not a blend that’s rocking my boat.
John: The Tatuaje La Riqueza SE 2022 had some interesting flavors in the first third that at times were medium-full but went all the way down to the light spectrum as well. The second third was pleasant but didn’t have enough flavor complexity to be as engaging for me as the first third. The last third became a more dark, toasted earth profile which made it quite different from the rest of the cigar. The draw was a mild amount into the resistant spectrum, while the burn required a touch-up and re-light through the review. The price point on the La Riqueza is reasonable but the profile didn’t grab my attention. With so many great cigars out of Tatuaje, I feel like there are at least a dozen options I would reach for first. Total smoking time was a bit on the quick side at 1 hour and 45 minutes.
Jiunn: The first third was awesome, as it’s in many ways what I look for and enjoy from a quality Connecticut Broadleaf cigar; nice dankness, barnyard, chocolate, supporting pepper spice. But past the first third, the bitter bite of cedar wood became too overwhelming on the other flavors, leaving the flavor profile more narrow and not as pleasant. So overall, I will pass on this Tatuaje La Riqueza SE 2022.