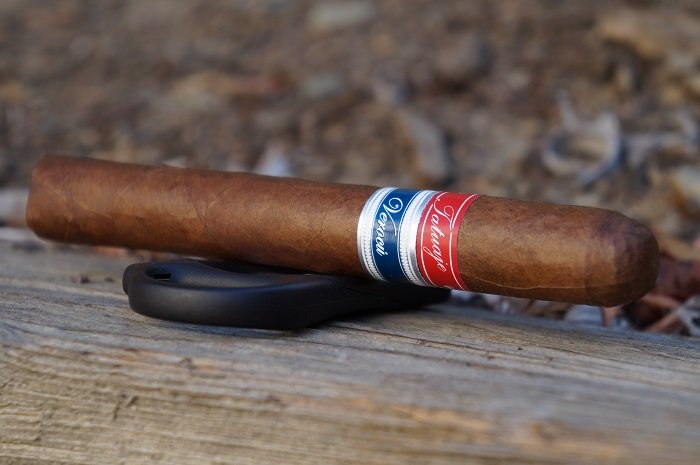 Aaron: The wrapper on the Tatuaje Havana VI Verocú Blue No. 1 is medium brown with a hint of red and a network of fine veins. The seams are a bit raised while the caps are well applied. There are two bands, with the primary being the traditional red band for the series and the secondary being blue, white and silver and denoting the line. The aroma from the wrapper is a mix of general wood and a light, damp earth. The foot brings cedar, earth and mild spice. The pre-light draw brings sweet and musty cedar along with a mild spiciness on my lips.
Seth: Silky wrapper on the Tatuaje Havana VI Verocú Blue No. 1 that is slighlty oily as well. Beautiful light brown coloring with some reddish hue. Colorado coloring. Veins present throughout, but smooth in texture. Aromas of oak, barnyard, spice, leather and sweet earth. Great aroma!
John: The Tatuaje Havana VI Verocú Blue No. 1 comes in cellophane and has a QR code on the cellophane. I’m unsure whether that’s from the retailer or Tatuaje. The cigar itself is double banded, with red primary Tatuaje band, and a white on blue secondary band indicating Verocú. I was able to pick out aromas of mild earth, barnyard, wood and bread from the wrapper. From the foot, I was getting dry hay and light earth.
Jiunn: The Tatuaje Havana VI Verocú Blue No. 1 has a Colorado wrapper shade. The wrapper is of high quality, showing nice traces of oils. Veins are well pressed, seams tight, bunch and roll even and the head is well wrapped and capped. Wrapper aromas tell hay and cedar. Foot aromas gives cedar and barnyard. Cold draw provides balanced cedar and white pepper spice. 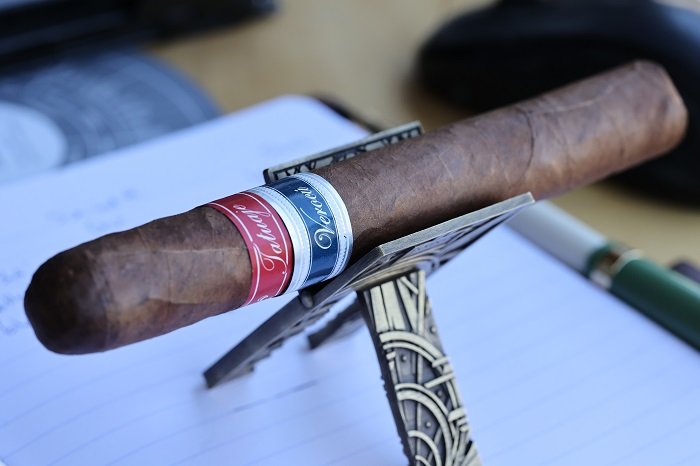 Aaron: The cigar begins with toasted and bitter cedar along with mild black pepper. At a half inch in, the bitterness is now very faint while a light chalkiness has joined in. The retrohale is toasted cedar and mild black pepper. At an inch and a quarter, a light mustiness joins the profile. As the third comes to a close, the profile is toasted and lightly bitter cedar up front, black pepper in the middle and light chalkiness and mustiness in the background. The strength was slightly below medium.
Seth: The first third starts out with this strong red pepper profile that is paired with musty wood, creaminess and some oak qualities. There are some vegetal green pepper notes as well. Earthy and leather qualities present as well on the finish. Medium-full in strength and body.
John: The first third opens with sweet hay, and a creme brulee finish on the retrohale. Dry wood and hay combine along with delayed spices on the post draw. Those spices start to break into the retrohale at medium strength as the first third progresses. By the halfway point, there is some bread sweetness just under the baking spices.
Jiunn: The first third shows a combination of must, meatiness, a pop of spicy cedar and baking spices. On the retrohale, greater spicy cedar. The finish is short and linear with tannins from mixed nuts (kind of like unpeeled roasted nuts). Strength and body is medium. 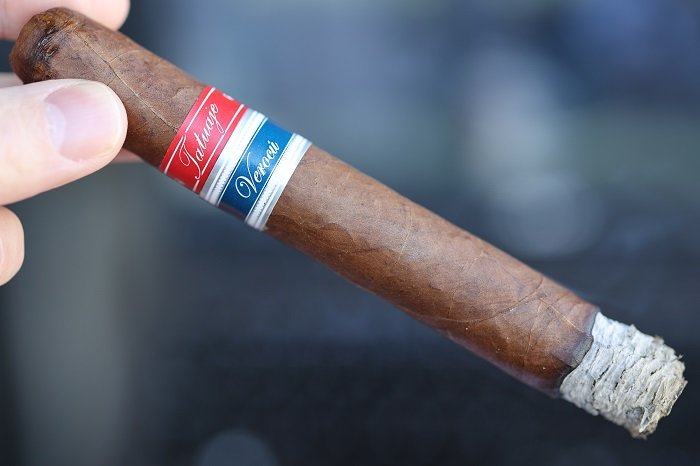 Aaron: As the second third begins, some dry earth joins and is even with the black pepper in the middle of the profile. The retrohale is now musty, toasted oak and light, dry earth. At an inch and a half in, the toast level increases a bit and the earth is now even up front. As the third comes to a close, heavily toasted and slightly bitter cedar is even with dry earth with black pepper in the middle and light chalkiness and mustiness in the background. The strength bumped up to medium.
Seth: The second third is more spicy, and the red pepper notes are more pronounced. Less creaminess in this third. Still lots of leather, musty wood, oak and earth. Leather present as well on the finish. Medium-full in strength and body.
John: Bread and mild baking spices combine here on the first few puffs, as spices and a light wood pair up into the post draw. I’m getting impressions of ginger bread as it continues. Wood takes up the center of the profile as the second third carries on.
Jiunn: The second third’s flavor profile isn’t as rich and complex as the first third. The first third’s presence of must and meatiness played very well with the wood and spices. This changed in the second third such that there’s less must and meatiness, leaving me with spicy cedar and baking spices. Strength and body remains medium. 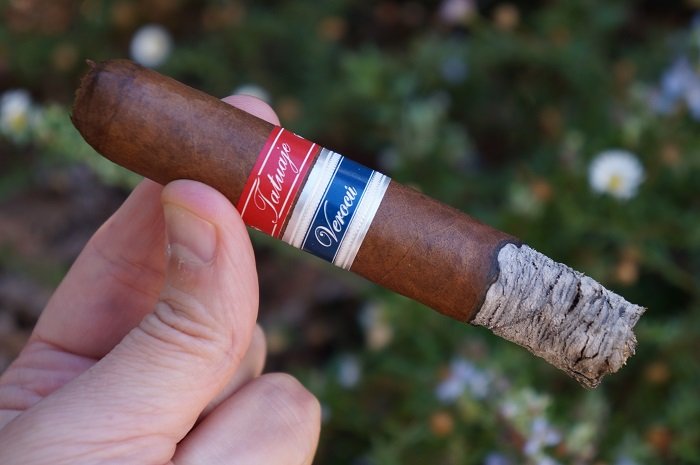 Aaron: As the final third begins, the pepper mellows into the background and the bitterness picks up slightly. At a half inch in, the chalkiness has departed. The retrohale remains toasted cedar and earth. As the cigar wraps up, the toast level becomes very heavy and the bitterness increases while the earth remains even up front with it. The black pepper and mustiness are in the background. The strength remained at medium.
Seth: The final third delivers more red pepper and dry earth notes. Some strong wood and leather qualities as well. FInish has some creamy and mineral qualities. Medium-full to full in strength and body.
John: The last third is a mixture of earth, wood, spices and bread with a sharp wood and earth combination that trails into the post draw. Some mild acrid earth is present at the end of the draw as it progresses. Earth is the dominant flavor component by the halfway point.
Jiunn: The final third continues the flavor profile of spicy cedar and baking spices. Still lacking the complexities and richness of the first third, but there aren’t any displeasing flavors. Strength and body finishes the same medium. 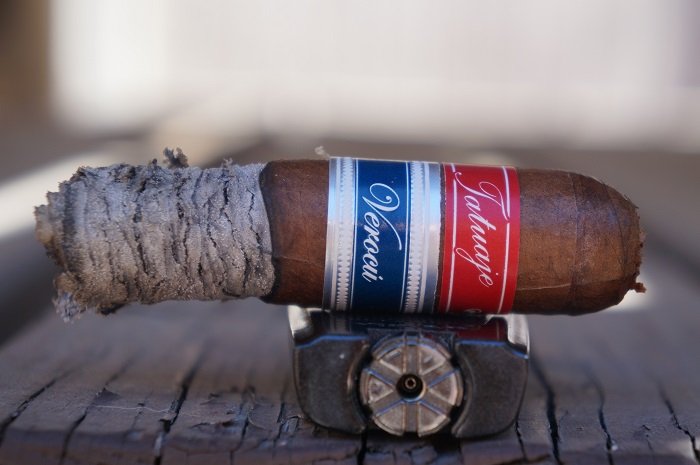 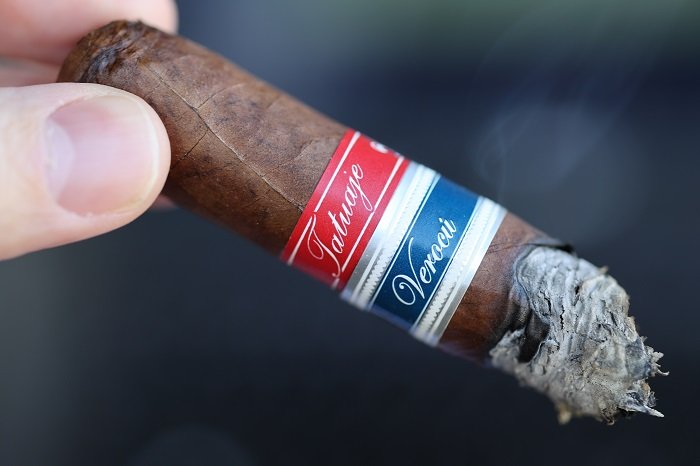 Aaron: The cigar began with toasted and bitter cedar along with mild black pepper. A light chalkiness joined in fairly quickly and some mustiness a bit later. The second third saw dry earth join. The final third saw the chalkiness depart. The flavor profile for the Tatuaje Havana VI Verocú Blue No. 1 never really got off the ground for me. The bitter cedar was just a detractor the whole time. I’m hoping my experience isn’t what the others have and can report on something a bit better. With my experience, I wouldn’t really see myself coming back to this.
Seth: I really enjoyed the Tatuaje Havana VI Verocú Blue No. 1, and found it to be superior to the classic. The wrapper used on this cigar is fantastic. I have enjoyed Escasos releases in the past, so it is no surprise I enjoyed this blend. It has some creaminess, but the red pepper spice with that makes it enjoyable throughout. Really nice construction.
John: The Tatuaje Havana VI Verocú Blue No. 1 was enjoyable and at times reminded me of baked goods for Christmas time which definitely held my interest. The last third was a stark departure from the rest of the cigar with darker, toasted earth flavors that didn’t harmonize with what was being delivered prior to that. The burn was almost perfect, with a single touch-up required in the last third, and the draw was right in the ideal zone. I would smoke the Tatuaje Havana VI Verocú Blue No. 1 again, the flavor profile is balanced and right in my wheelhouse. Total smoking time was 2 hours and 15 minutes on the nose.
Jiunn: As I mentioned a few times already, the Tatuaje Havana VI Verocú Blue No. 1 lacked richness and complexities that is often present from Tatuaje. The flavor profile was most flavorful within the first third, but it failed to keep that momentum to finish strong into the remaining two thirds. I’d like to first try the No.2 before moving on from this label.